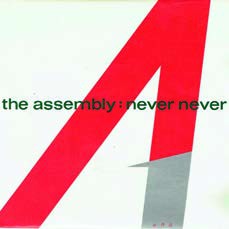 Maybe it’s churlish to describe The Assembly as one-hit wonders, considering the chart hits that two of those who were part of the project were previously and subsequently responsible for, but Never Never nonetheless ended up as their only recording. As if to prove it hadn’t been a fantastic waste of time, the single was released at the end of 1983. Intrigue over two guys from opposite ends of new wave working together aided its rise, but ultimately it was a terrific electronic arrangement from Vince Clarke and a soaring vocal from Feargal Sharkey. The track shot straight into the Top 40 and was at No.4 within a fortnight. It was joined in the Top 10 for a further two weeks by another Clarke composition, The Flying Pickets’ version of Only You, which ended up as the Christmas No.1. Clarke’s plan after Yazoo had been for an album with a host of different guest vocalists, but after recording Never Never with Sharkey, it fell by the wayside. Instead, he placed an ad in the music press looking for a new singer, eventually recruiting Andy Bell and forming Erasure. Meanwhile, Feargal had his first solo hit in 1984. When Sharkey accepted an invitation to play with Erasure at the Mute Festival in 2011, taking centre-stage alongside Clarke with Bell on backing vocals, it was the first time The Assembly had ever performed live together.