Kalika Yap, an Entrepreneurs’ Organization (EO) member in Los Angeles, is founder and CEO of both Orange & Bergamot, a creative agency for female founders, and Citrus Studios, a branding and design agency. She’s also an author and the host of  EO Wonder podcast. 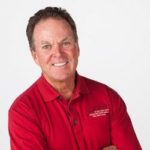 Jacky Daly spoke in a recent EO Together live-stream, and Kalika shares highlights.

Jack Daly has been selling all his life. At 12, he picked up a paper route in Philadelphia that had 32 customers. A year later, it had 275.

But that meant trudging around in the Pennsylvania snow before dawn, delivering papers. You had to be 12 to have a paper route, so Daly hired a bunch of eager 11-year-olds who wanted a job but couldn’t get one for another year.

“I said, `Here, you guys go and deliver the papers. I’ll split the money 50/50 with you,’” Daly recalls. “’A year from now, I’ll write you a letter of recommendation, you’ll get your own route. And by the way, I’m going to do the collecting.’”

That last part was key because people tipped him when he collected, and he kept those to himself. “So they did 100 percent of the work and I kept 70 percent of the money,” Daly says.

That’s when he knew he wanted to be an entrepreneur, and he’s been one ever since. He’s also an endurance athlete, completing 12 Ironman races in eight countries.

The paper route was a homerun, to be sure, but he really made it big in 1985, when he moved to California (for the weather) and started a mortgage company with three other people. A year and a half later, the firm had 750 employees.

How did Daly figure out how to do that? By asking questions. While delivering newspapers, he moonlighted as a caddie. His family didn’t have the money for golf, and Daly wondered how these players got theirs. So, he asked them. And asked them again.

“In that process, I ended up interviewing 200 successful business owners in the summer of my 13th year,” Daly said in a presentation to members of Entrepreneurs’ Organization. He has kept up the practice, which he calls “modeling the masters.”

So what did those entrepreneurs tell him?

Daly has been setting goals since he was 13, when he wrote down where he wanted to be at age 30 in terms of education, profession and family.

Another trick? Appoint a board of directors for your life. Daly has a five-member board that he meets with four times a year to make sure he’s on track. One of them is his daughter, Melissa, 44, who is known, he says, as “Jack in a skirt” because she is as driven as he is.

Yet another trick: Don’t be afraid to blow your own horn. Daly says he often got passed over for promotions early in his career at Arthur Anderson and Enron because he thought his good work alone would advertise his abilities. Not so, he says. After a series of disappointments, he decided to switch things up.

“You have to position yourself,” Daly says. “Literally, overnight, I decided to change my personality. In fact, my wife Bonnie had to get accustomed to this new guy that was out tooting his horn. But when that happened, opportunities presented themselves like crazy.”

Not long after, Daly found himself at the helm of his mortgage company. He had a seven-figure income, a chef on the floor of his building, a helicopter and jet on call, and floor tickets to the Los Angeles Lakers, for the season.

And then he met Jim Pratt, whom he had hired as a speaking coach. They got to talking, and Pratt told him about traveling the world and helping people become better at their jobs, which sounded like a lot more fun. So he moved to San Diego to work with Pratt. After years of running large organizations, it was time for a change, he thought.

“My largest Salesforce was 2,600 people,” Daly says. “Those people will suck every ounce of blood out of you. Today I have no employees, I go wherever I want.”

After coming off the field to become a coach and speaker, Daly wrote the best-seller Hyper Sales Growth. He speaks regularly to Fortune 500 audiences.

Daly has done lots of different things in his life, but he pursued them all with the same strategy: set a goal, have a plan, and set a deadline.

“At the end of the day,” he says. “It all comes down to vision, a playbook,and then one word: grit.” And, if you’re an entrepreneur, you know all about that last item.

Jack Daly is a sales speaker and trainer with over 30 years of sales and executive experience. He started his professional journey at CPA firm Arthur Andersen and rose to the CEO level of several corporations, building six companies into national firms along the way, two of which he subsequently sold to the Wall Street firms of Solomon Brothers and First Boston. He is a 15-time Ironman competitor and has completed over 93 marathons in 49 states and on six continents. He achieves these goals and lives life to the fullest by following his own Life by Design techniques.