1. The manufacture of confusion. The COVID-19 pandemic has devastated the American economy, and killed more than 60,000 people— in an election year.

There is going to be a campaign to prevent Americans from understanding what happened within the Trump government during the critical months of January to April, 2020. Many times Donald Trump told the nation that it has nothing to worry about because he and his people have the spread of the SARS-CoV-2 virus well in hand. They did not. He misled the country about that.

He misled the country. This basic fact is so damning, the evidence for it so mountainous, and the mountain of evidence so public — and so personally attached to Donald Trump — that the only option is to create confusion about these events, and about the pandemic generally, in hopes that people give up and conclude that the public record does not speak clearly and everything is propaganda.

Creating confusion is basic to how he operates anyway. But now his time in power and control of Congress are in doubt because of the pandemic. The stakes are unimaginably high, not just for him, but for the entire Republican Party and for all who have gained from his chaotic reign. The manufacture of confusion will thus move to the center of his 2020 campaign strategy. Is the American press ready for that? No, it is not. And that’s a problem.

2. The White House press needs to switch settings to cope with Trump. But this is not happening. For five years I have been sounding this alarm: your practices are built on assumptions about how presidents will behave. None of those assumptions apply to Trump. So your practices will have to change. On the second day of his presidency I said it as clearly as I could. “They can’t visit culture war upon you if they don’t know where you are. The press has to become less predictable. It has to stop functioning as a hate object.”

Margaret Sullivan pulled the same alarm in a column published today. Plenty of good work has been done by individual reporters, she writes. (I agree with that.) Small adjustments in practice have been made. (I agree with that too.)

But in the big picture and as a whole, we’ve never quite figured out how to cover Trump for the good of citizens. We’ve never really fully changed gears despite Trump’s constant, norm-busting behavior. Determined to do our jobs — dutifully covering the most powerful person in the world — we keep coming back for more: Beat reporters file into the briefing room, sometimes to be publicly insulted and disparaged as “fake news” or “a terrible reporter.”

James Fallows of the Atlantic put it this way: “The media were not built for someone like this. That someone has not changed. The media must change.” But it has not happened, not at the depth required. Which is why a few weeks ago I wrote this: Today we are switching our coverage of Donald Trump to an emergency setting. It’s a sample editor’s note from an imagined newsroom that spells out how to shift footing. It didn’t work, of course, but then nothing does.

3. The advertising model is dying. Direct dollar support from readers, viewers and listeners is difficult to come by and requires a lot of knowledge and training to do well. Creating a digital news product that people are willing to pay for is way harder than luring an audience and selling it to advertisers. Sustained government subsidy is unlikely and undependable— and it could be ruinous for independence. The tech platforms are not going to take responsibility unless they are forced. The economic crisis in journalism has no clear solution. Employment is falling. The news industry is contracting: shedding talent, losing memory. No one is going to ride to the rescue. 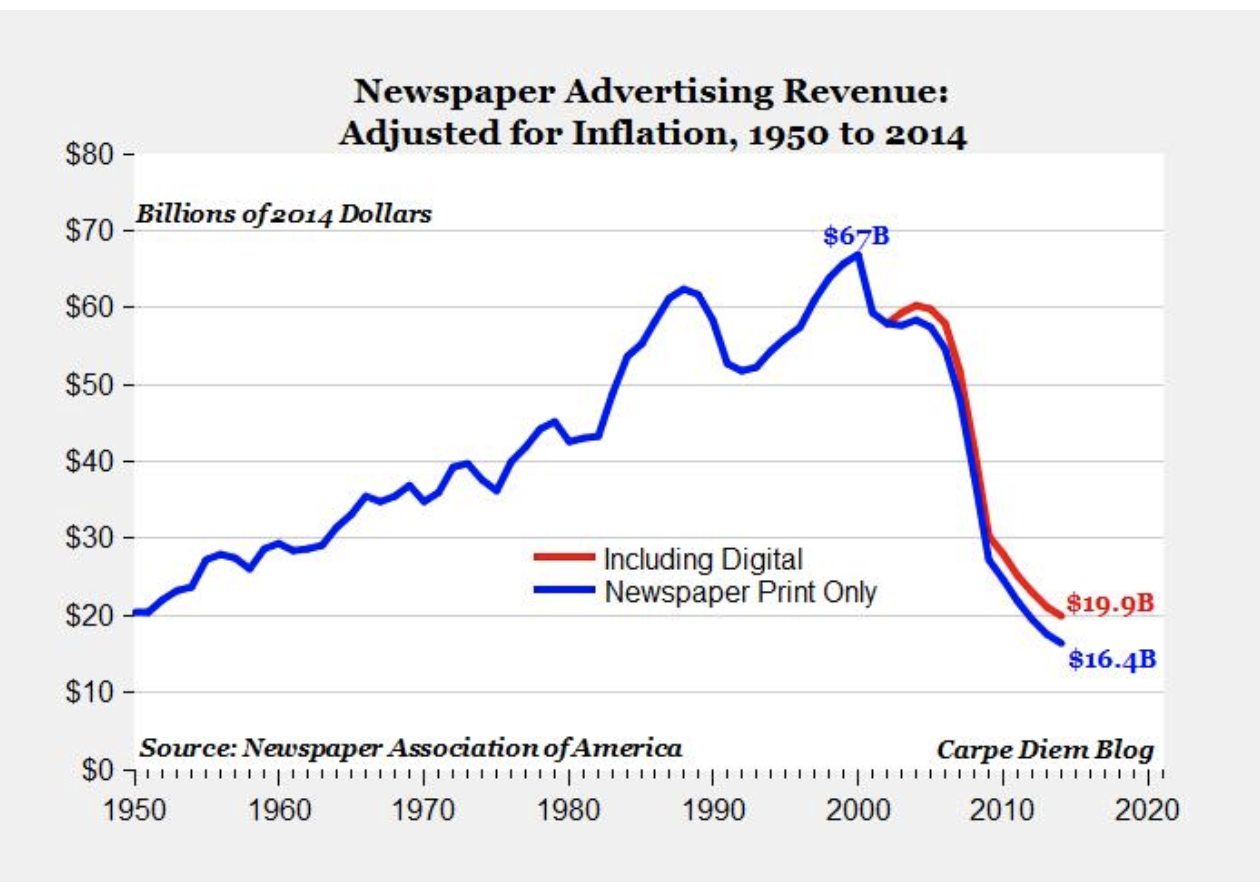 4. At the deepest roots of our thinking about journalism are these fixed ideas now leading us astray. The French have a term: idée fixe. It means a persistent preoccupation that dominates the mind and resists any attempt to modify it. Some examples that vex me:

My most recent Twitter thread is about another idée fixe: the image of “exposure” as a description of what good journalism does: “Many of the biggest and hardest problems before the American press involve matters that have already been ‘brought to light,’ meaning they cannot be resolved by further exposure.” We can think of fixed ideas as places where journalism refuses to adapt. They are defended as if they were first principles. But they’re not.

5. We are heading into an election and it’s not clear what will be different from 2016. I can say this in a sentence or two because I think you all understand what I mean. It’s Trump against Biden. What evidence do we have that journalists have learned from the 2016 campaign (“It may not be good for America, but it’s damn good for CBS…“) and are ready to take a different approach? Very little. Recently I tried to ask a CNN reporter that question. No reply.