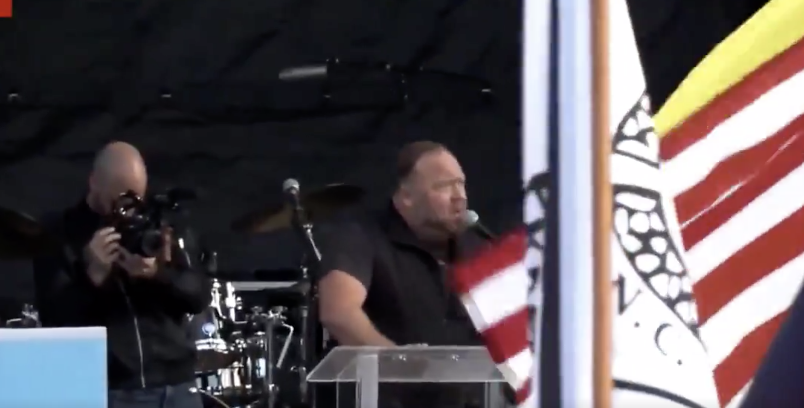 Right-wing conspiracy theorist Alex Jones on Saturday, during the pro-Trump “Jericho March” in Washinton D.C., stated that President-elect Joe Biden “will be removed one way or another” from office to a fiery crowd of Trump supporters.

“We will never back down to the Satanic pedophile, globalist New World Order and their walking-dead reanimated corpse Joe Biden, and we will never recognize him,” Jones began his rant.

Alex Jones at the pro-Trump march in Washington, DC: “Joe Biden is a globalist, and Joe Biden will be removed, one way or another!” pic.twitter.com/ujIc7XZcLb

“And we will never recognize him. President Trump had zero connection to Russians. No proof. Four years of investigation. With the Bidens, it’s open and shut,” he continued.

The conspiracy theorist then called Biden a “globalist” before alluding to what many Twitter users found to be a threat.

“So I don’t know who’s going to The White House in 38 days, but I sure know this. Joe Biden is a globalist, and Joe Biden will be removed, one way or another!” Jones concluded.

This certainly sounds like the sort of thing that would get most folks a friendly visit from their local @SecretService field office. https://t.co/45FqjGwLJu

The pro-Trump rally is giving a platform to Alex Jones of Infowars, a lunatic conspiracy theory outlet that has falsely claimed that the Sandy Hook massacre was faked with child actors and said that John Kerry shot an Antarctic hurricane with a laser beam to split it in half. https://t.co/Vf8sxrwWqf