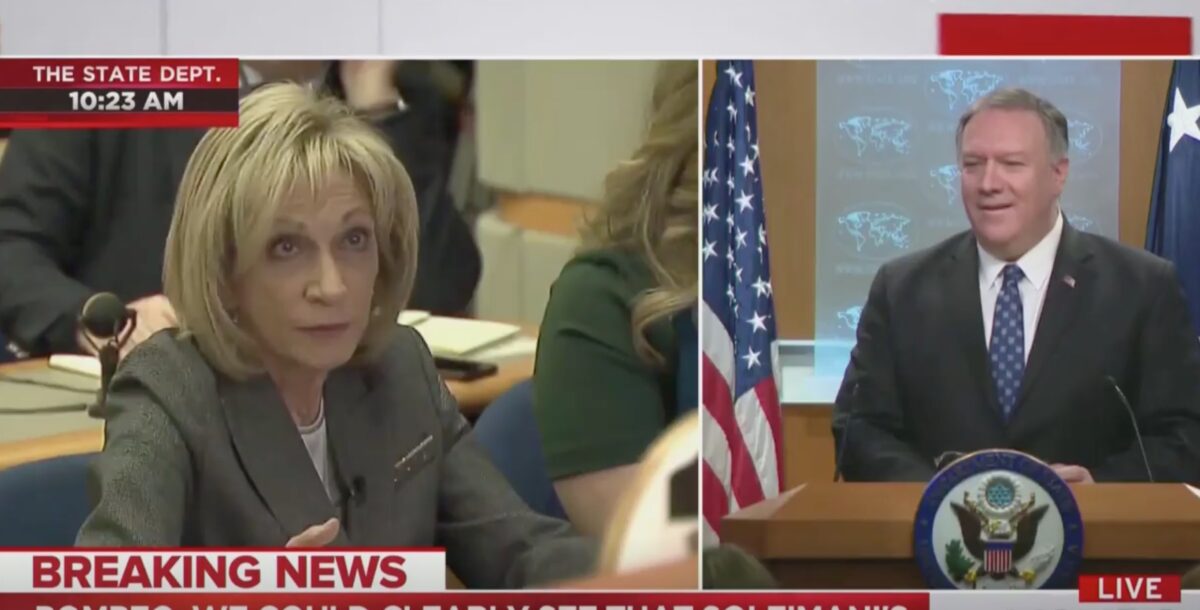 NBC’s Andrea Mitchell hit Secretary of State Mike Pompeo with a snappy comeback after he knocked her work as a journalist when she raised questions about his activities in office.

The dust-up started when Mitchell took to Twitter and noted that Pompeo was traveling to Georgia on Wednesday to give a speech before the Georgia Institute of Technology. NBC reports that the secretary used his address to bash “anti-Americanism” at left-leaning colleges, and he claimed China is exploiting that sentiment to advance its own interests.

When Mitchell flagged the speech in advance on Tuesday night, she wondered out loud if Pompeo’s actions were “political?” She also called out Pompeo for his bad-faith sneering at the political implications of his remarks when he spoke recently with conservative pundit Guy Benson.

.@SecPompeo to speak in Georgia ahead of Senate runoffs. Political? He says “When Sec. Kerry traveled to Massachusetts or Sec. Clinton traveled to NY those were coastal elite states. Those were all fine for secretaries to travel to” Huh? That’s where their families lived

Mitchell’s wonderment at Pompeo’s conduct comes as Georgia has been the center of major political fights for over a month. President Donald Trump keeps claiming without evidence that the state’s 2020 election results were corrupted by fraud, plus the senate runoff elections in Georgia will carry major implications for the balance of power in Congress.

In any event, Mitchell’s comments were noticed by Pompeo, and he shot back with complaints about past media coverage on his trips back home to Kansas. Pompeo has been scrutinized before over possible Hatch Act violations, but rather than linger on that, Pompeo told Mitchell to “Do some reporting” and that “this trip was planned long before the Georgia runoff.”

Andrea – Do some reporting. When I went home to Kansas to see family, your network was howling saying I was violating the Hatch Act. The claims were found to be bogus. This trip was planned long before the Georgia runoff. Do some reporting. https://t.co/9fHEjUzvrl

Mitchell saw Pompeo’s tweet and it seems she’s taking his admonition rather well:

Mr. Secretary thank you for finally answering one of my questions! https://t.co/LQxa84RM6q

This wouldn’t be the first time Pompeo and Mitchell have had at it.