Italian born DJ/Producer and Nervous Horizon head Guglielmo Barzacchini and his Australian counterpart and Sumac co-owner Jarred Beeler have come together under their Anunaku and DJ Plead aliases to produce a stunning three track EP. Titled 032, it’s characterised by the London based duo’s penchant for exploring global percussive elements in their individual work. Getting to know each other though their admiration for each other’s work and Beeler’s presence in  London, the city Barzacchini’s  adopted as his home a decade ago, the artistic connection and the growing friendship has created a rigorously rhythmic and dense work of compositional urgency. Tellingly, the pairs insistent attention on sound design, makes its also one of great clarity and spatial precision.

‘Wheele’ is the more traditional and less embellished with its mesmerising polyrhythmic drums kept in check by laterally sounding sub bass hum. That hum becomes more pronounced on ‘Clap, Clap’ which mixes the trusty old beat of the Amon shuffle with reed that sounds like its from a film score and busy percussive claps. Closer ‘Haze’ seamlessly blends a 4/4 techno beat with more syncopated drum magic, a pulsing, beeping and blaring assortment of high end frequencies and intense twirling melody.

Head over to our New Experimental & Electronic Playlist and New Techno Playlist to listen to ‘Clap Clap’ and ‘Haze’ respectively and check out opener ‘Wheele’ below. 032 is out now through on the ever impressive AD-93, Purchase the EP here.

AD-93 is the new name of the London label formerly known as Whities. Read the statement from Nic Tasker explaining the reason for change below. 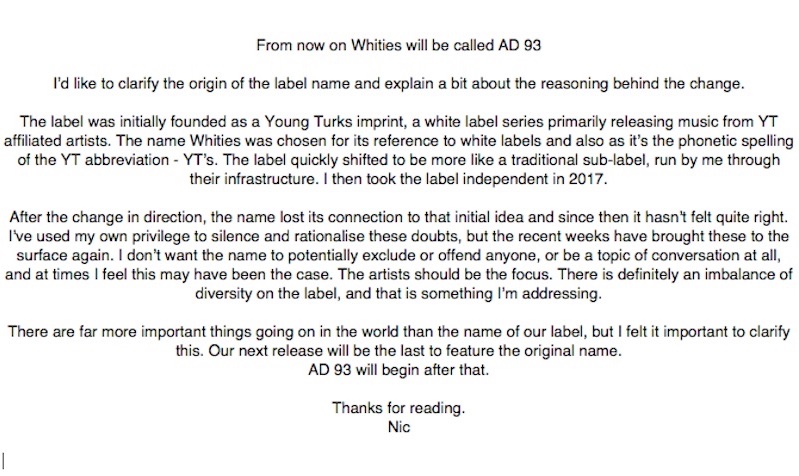