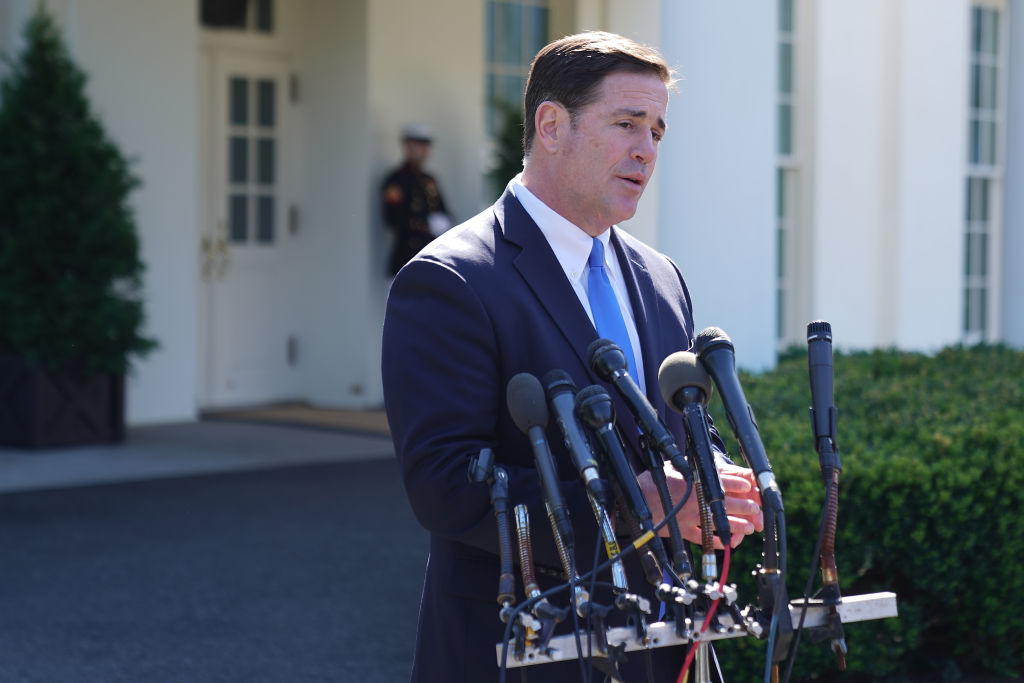 Arizona Gov. Doug Ducey posted a long Twitter thread on Monday night boasting of his state’s election integrity — offering a not-so-veiled pushback at the attacks on him and his state’s voting process from President Donald Trump.

Earlier on Monday, Trump had raged against Ducey and threatened him on Twitter for following his state law and certifying the election results, which confirmed President-elect Joe Biden beat Trump by more than 10,000 votes. Ducey had already been called out by local pro-Trump protestors on Monday afternoon, who slammed him as a “traitor” to the president just moments after Ducey signed off on Arizona’s election results.

Ducey responded in turn with a number of tweets explaining his state’s election process and the safeguards put in place to prevent any kind of widespread fraud, which is exactly what the Trump campaign has alleged without any actual evidence.

In his first post, Ducey noted how he has “bragged” about the state’s election system, and added in a subtle dig that he’s even talked about it “in the Oval Office.”

I’ve been pretty outspoken about Arizona’s election system, and bragged about it quite a bit, including in the Oval Office. And for good reason. 1/

He went on to break down the state’s election process.

We’ve been doing early voting since 1992. Arizona didn’t explore or experiment this year. We didn’t cancel election day voting as some pushed for — we weren’t going to disenfranchise any voter. 2/

In Arizona, we have some of the strongest election laws in the country, laws that prioritize accountability and clearly lay out procedures for conducting, canvassing, and even contesting the results of an election. 3/

We’ve got ID at the polls. We review EVERY signature (every single one) on early ballots — by hand — unlike other states that use computers. Prohibitions on ballot harvesting. Bipartisan poll observers. Clear deadlines, including no ballots allowed after Election Day. 4/

Ducey then pivoted to reviewing Arizona’s process for certifying its vote, explaining the timing of the vote and that failure to approve the state’s vote total can only occur if its counties refused to do so first. They didn’t, he emphasized, so he followed the law.

The problems that exist in other states simply don’t apply here. I’ve also said all along, I’m going to follow the law. So here’s what the law says… 5/

It requires the Secretary of State, in the presence of the Governor and the Attorney General, to canvass the election on the fourth Monday following the general election. That was today. 6/ pic.twitter.com/Bo3UnnRYe6

Finally, Ducey offered a clear, put-up-or-shut-up ultimatum to Trump and his campaign, noting that there is now a five-day window to bring a “credible challenge” in court. “If you want to contest the results, now is the time,” he said. “That’s the law. I’ve sworn an oath to uphold it, and I take my responsibility seriously.”

The canvass of the election triggers a 5-day window for any elector to bring a credible challenge to the election results in court. If you want to contest the results, now is the time. Bring your challenges. 8/

That’s the law. I’ve sworn an oath to uphold it, and I take my responsibility seriously. 9/9