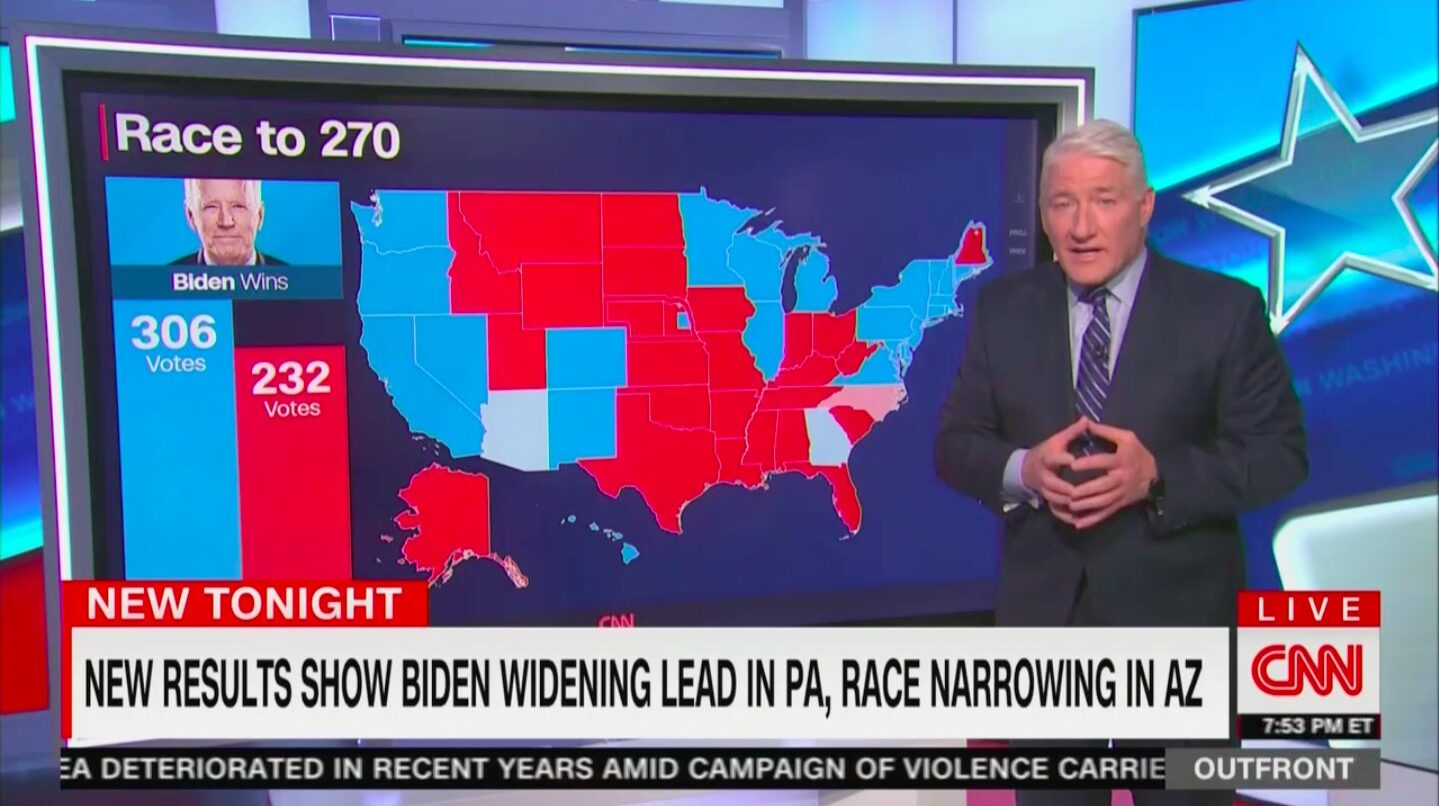 November was a month of record ratings for the cable news networks. Fox News had its highest rated November in history, while CNN and MSNBC had their highest rated months in history.

No network saw growth on par with CNN, which had its highest-rated month in its storied 40-year history, breaking every internal ratings record as viewers flocked to the network for coverage of the 2020 presidential election and its shocking aftermath.

After Election Day on Nov. 3, CNN was the top rated network for the rest of the month, in the advertiser-coveted 25-54 demo and total viewers, beating out Fox, which saw its numbers soften after calling President Donald Trump’s loss.

When factoring the entire month of November, Fox News won the total day ratings overall, averaging 1.94 million for the month. CNN placed second with 1.78 million and MSNBC was third with 1.58 million.

The demo told a different story across the total day: CNN stormed to first with 558,000 viewers — beating all of cable, not just the news networks — while Fox News placed second with 413,000 and MSNBC came last with 302,000.

In prime time, there was a similar trend.

Fox News came first with 3.93 million viewers overall — enough to beat the cable and broadcast networks — CNN came second with 2.8 million and MSNBC was third with 2.66 million. In the prime time demo, CNN placed first with a massive 948,000, Fox News was close behind with 827,000, and MSNBC trailed with 536,000.

All of the networks were up big compared to November 2019. But CNN’s surge was truly remarkable: Up 210% in the total day demo and 297% in the prime time demo. That’s good news for Anderson Cooper, Chris Cuomo and Don Lemon.

Fox News dominated the top five shows on cable. In total viewers, the network had four out of the five top shows on cable. Tucker Carlson placed first with 5.09 million viewers, Sean Hannity came second with 4.98 million, The Five came third with 3.78 million, Laura Ingraham fourth with 3.77 million, and MSNBC cracked the streak thanks to Rachel Maddow, who placed fifth with 3.43 million.

While MSNBC held on to some successes, their flagship shows got beaten in total viewers by Fox News and in the demo by CNN. In the demo, Anderson Cooper beat Chris Hayes at 8 p.m., Chris Cuomo beat Rachel Maddow at 9 p.m. and Don Lemon beat Lawrence O’Donnell at 10 p.m.

The morning shows also had a big month: Fox & Friends drew its highest ratings in the demo in history, 374,000 in 25-54 metric. The show drew 1.8 million viewers overall, beating out MSNBC’s Morning Joe and CNN’s New Day.