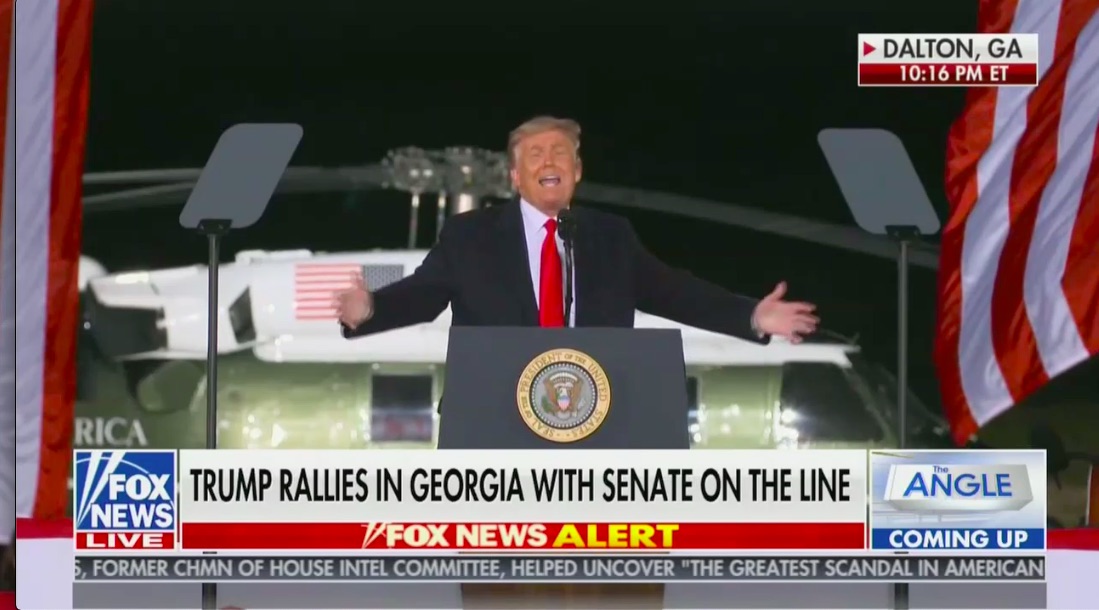 Conservative commentators are blaming President Donald Trump as the votes are counted in the Georgia Senate runoff elections, showing Democrats in a strong position to win both seats and therefore full control of Congress.

While its too early to call the races yet, the early results from the state are coming in, and one of the biggest initial findings is that Democrats Jon Ossoff and Raphael Warnock seem to be outdoing President-Elect Joe Biden’s performance in the populous Fulton County. The two candidates are also having similar gains in Macon County while other counties are seeing less Election Day turnout so far than Republicans seemed to expect for Kelly Loeffler and David Perdue.

The election is unlikely to be called before the night is over — though Dave Wassermann of Cook Politicla has already called the Warnock-Loeffler race for the Democrat — but Democrats are well-poised. And a number of pundits are blaming Trump for possibly having turned Georgia blue.

In the last 2 months, Trump has attacked top officials in the state, pressured Georgia’s secretary of state to help him overturn his defeat, spread conspiracy theories of mass voter fraud, and repeatedly sowed doubt in the integrity of Georgia’s elections by claiming (without evidence) that his was stolen. Many Trump allies have urged Republican voters to stay home and boycott the runoff elections.

The morning of the runoffs, Trump tweeted a conspiracy theory that there were problems with voting machines in Georgia.

Political observers pointed out that the president’s crusade against the integrity of American elections could have depressed Republican turnout. Some staunch Trump supporters even joined in to blame Trump for the tight state of the race:

Very clear there’s been voter suppression in Georgia. The Georgia Republican Party Chairman, the President of the United States, and the Georgia GOP congressional delegation are the culprits. 🙄😂

Turns out when the state GOP party chair, the congressmen, and the president all say the election was stolen, the Republican voters say fuck it and stay home. Funny how that works.

If I were president, I would simply not drag down candidates in my party by acting like a lunatic during a runoff.

Trump failed the final loyalty test to the GOP by asking them to embrace the career-ending delusion that he won. Why should Republicans burn their own fates to be loyal to him? He probably cost you the Senate. Stop debasing yourselves for his ego. https://t.co/91U3NBaVpR

Trump literally tweeted *today* of all days that there were current problems with voting machines in Georgia, which was not true and was debunked hours before he tweeted it. https://t.co/dACumkoxWP

If walking caricatures like Lin Wood and Sidney Powell can show up and tell your party’s grassroots not to vote, and your grassroots choose to obey their edicts, you are so far up a particular creek without a paddle that not even a GPS can find you. https://t.co/vpl9NI7CaN

Exactly. He’s proven he’s willing to drag everyone else down with him because, in his mind, the right hasn’t sufficiently fought for him and been onboard with Stopping the Steal. https://t.co/ZErdYiUFaY

Text from a GOP strategist: “thanks alot Donald”

They could have spent 2 months arguing that showing up and voting will be critical to stopping the Biden and Pelosi agendas, but Dear Leader’s ego had to come first.

Hope it was worth it.

“Too many folks in our party over the last two months have been talking about misinformation.” https://t.co/jzUVst9ES1 pic.twitter.com/mRnurynO5t

y’all followed “republicans” who told you not to vote… and then seem surprised when republicans don’t get votes? what