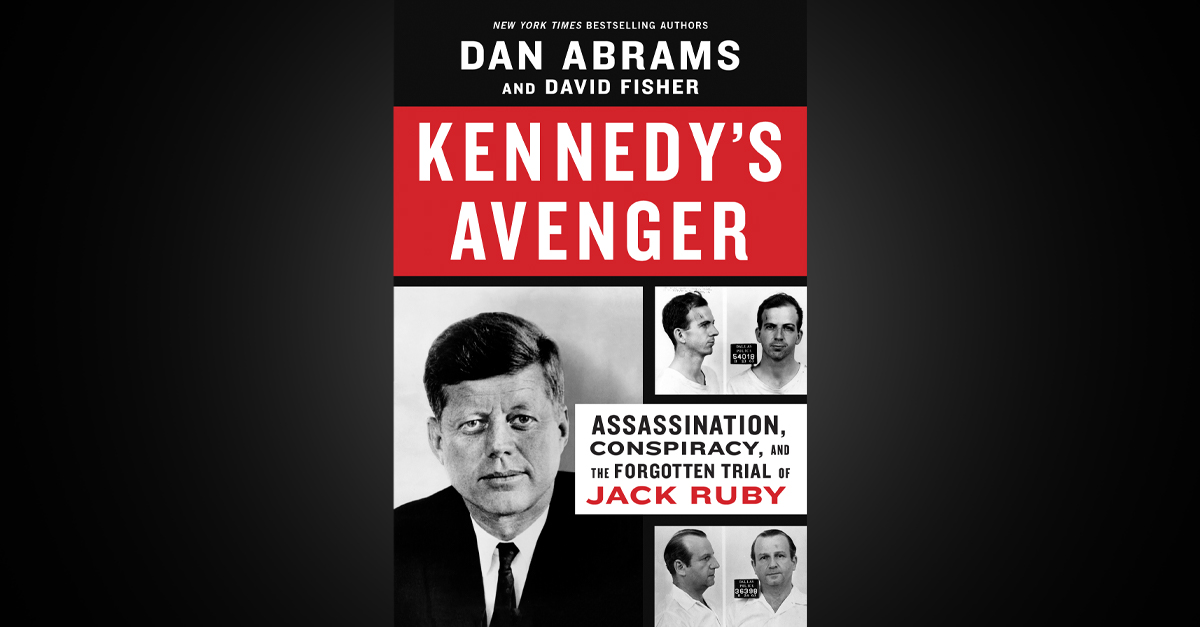 No event sparked the age of modern conspiracy theory more than the death of President John F. Kennedy. But what happened to the man who silenced the killer? Authors Dan Abrams and David Fisher bring you the real life tale of how nightclub owner Jack Ruby—the assassin of an assassin—died an innocent man.

Their latest book, Kennedy’s Avenger, is scheduled for publication June 1, 2021 wherever books are sold.

There’s no doubt you’ve seen the picture: Ruby fatally shot Kennedy assassin Lee Harvey Oswald at Dallas police headquarters on November 24, 1963. It was no surprise that he was charged with murder for this. Any prosecutor would love to have such hard evidence. You cannot get more definitive than video, and an iconic, Pulitzer Prize-winning photo. (If only Kennedy’s death were so clear-cut.) One might think that a conviction against the nightclub owner was sitting there on a tee for Texas authorities, but those expectations went out the window in the wake of the president’s assassination.

The shooting did not just end Oswald’s life. It also gave birth to numerous, if unproven, speculation on how many people were responsible for Kennedy’s death. Of course it was going to be controversial.

Ruby’s trial had all the ingredients of a case prone to fireworks. A flamboyant defense lawyer? Check. A tough-as-nails prosecutor? Check. A sensational case perfect for armchair detectives and second-guessing from the public? Check. Abrams and Fisher unveil the astonishing details.

“Each of our books has combined colorful characters, memorable events and actual courtroom transcripts to tell a story of our Presidents to be, or former Presidents involved in major trials often forgotten to history. In doing so we’ve also followed the development of the American legal system from the 18th century into the 20th,” said Abrams and Fisher, who have also authored books on John Adams, Abraham Lincoln, and Theodore Roosevelt.

All of those books have been multi-week New York Times best-sellers.

“As we discussed our next topic for this fourth book in the series,” the authors said, “we eventually landed on the assassination of President Kennedy and quickly realized that while the world knew about nightclub owner Jack Ruby killing Kennedy assassin Lee Harvey Oswald live on national TV, few knew about Ruby’s actual trial. And what an amazing trial it was.”

“Witnesses included a world famous boxing champion, ‘strip tease dancers’ from Ruby’s club and the police detective who had been shackled to Oswald when he was shot. Ruby’s lawyer was arguably the most famous and flamboyant attorney in the country and chose a bizarre defense to try to save his client,” they added. “Some of the curious trial testimony even fueled the rapidly growing conspiracy theories surrounding the Kennedy assassination.”

Abrams, the founder of Law&Crime, and co-author Fisher said that Ruby was not the only one on trial. The city of Dallas was as well—desperately attempting to defend its reputation after both Kennedy and Oswald were killed there within days of one another. They also mentioned a remarkable incident in which prisoners executed a major jailbreak in the courthouse and took trial spectators hostage.

“This killing had the most eyewitnesses of any crime in world history and the trial was America’s first great modern media trial, covered by almost 400 reporters from around the world,” the authors said. “Yet few people remember that Jack Ruby died an innocent man.”