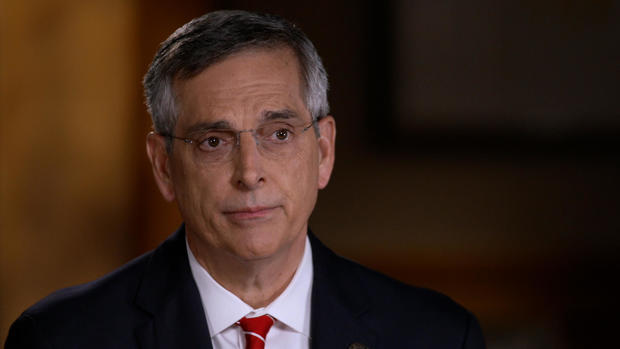 Normally, most people outside of Georgia would not know the name of their Secretary of State, much less lower level elections officials. But we are not in normal times, and Secretary of State Brad Raffensperger and his chief operating officer, Gabriel Sterling, are now nationally known after the two longtime Republicans found themselves the targets of President Donald Trump’s ire.

Voting for Trump wasn’t enough to stay in his good graces; they refused to support his baseless claims of election fraud — claims they told 60 Minutes’ Scott Pelley they viewed as responsible for inciting the violent insurrection at the U.S. Capitol Building last Wednesday.

Both Raffensperger and Sterling described threats they and their colleagues had received as a result of Trump’s criticisms, and staunchly defended their office’s work during the November 3, 2020 general election and January 5, 2021 Senate runoffs.

Raffensperger dismissed Trump’s claim that 5,000 Georgians voted in the name of dead people, noting that the real number was two.

The two elected officials also walked through the video that Rudy Giuliani and other Trump allies have attempted to portray as proving fraud, showing the context of longer clips that show how the ballots were in fact handled properly.

According to Sterling, Trump’s team always had the the unedited video, and knew the truth, but promoted the lie anyway.

“They intentionally misled the state senators, the people of Georgia, and the people of the United States about this to cause this conspiracy theory to keep going and keep the disinformation going, which has caused this environment that we’re seeing today,” said Sterling, drawing a direct connection between these election fraud claims and the violent riots at the Capitol.

Five weeks ago, Sterling had urged Trump to give up on these baseless claims and “stop inspiring people to commit potential acts of violence.”

Pelley played a clip of that press conference, and asked Sterling, “Now that we saw the mob attack the Capitol, is that what you meant?”

“Yes,” replied Sterling. “That’s exactly what I meant. And continuing the disinformation and spinning up people’s anger while they’re emotionally raw, this is exactly what you’re going to see.”

“It was surreal,” Raffensperger said about his reaction to seeing the video of the attack on the Capitol. “We’ve never seen anything like that in 150 years, maybe even longer, probably 200 years. It was really an affront to the people that founded this nation…You know, we had some great founders. I know they weren’t perfect men, but they were great people. They were some of the most learned people we had in our society. And that’s the high ideal that we all should kinda elevate ourselves to, to be noble people of high character, and patriotic, and love our country.”

Watch the video clips above, via CBS.