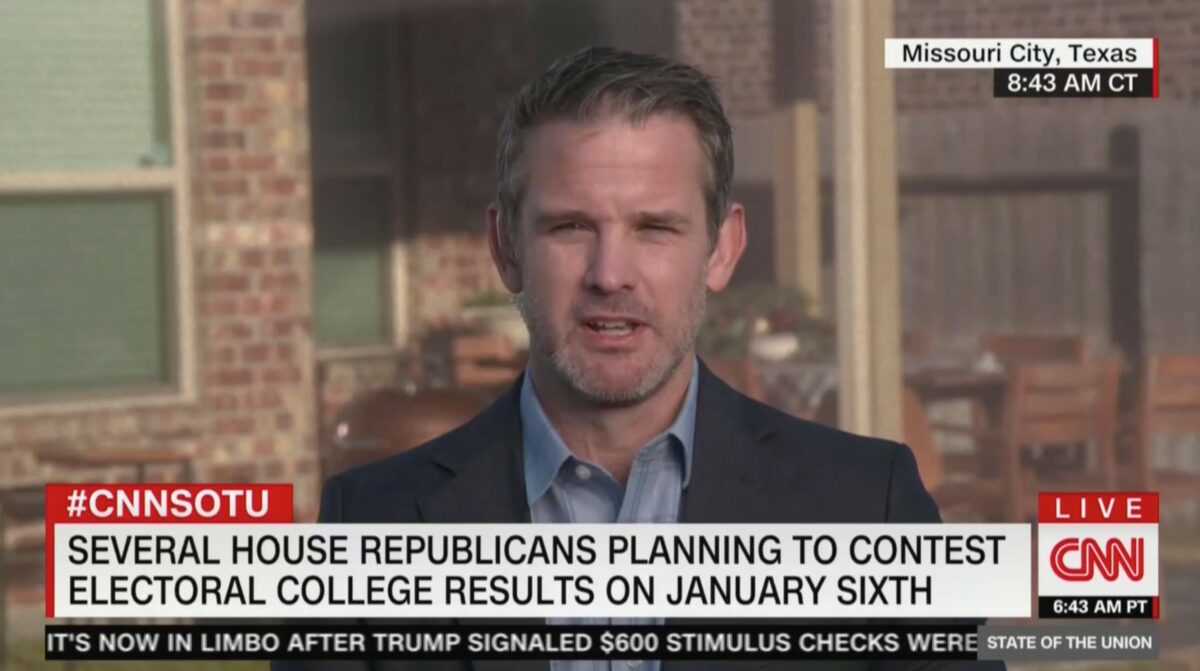 Hawley’s objection will serve as an extension to President Donald Trump’s election dispute, even though no evidence has ever emerged to prove that rampant fraud swung the contest for President-Elect Joe Biden. Nonetheless, Hawley’s statement says the senator will object during the Electoral College certification process on January 6th, and his endeavor will also “highlight the failure of some states, including notably Pennsylvania, to follow their own election laws as well as the unprecedented interference of Big Tech monopolies in the election.”

Enter Kinzinger, who has been slamming his Republican colleagues recently for entertaining Trump’s efforts against the election for their own reasons. The congressman noticed Hawley’s plan and responded with a snarky interpretation of the senator’s politically self-interested ulterior motives.

Internal monologue: “I want to be President so I decided to try to get POTUS tweet saying I’m great even though I know this isn’t going anywhere, but hey… I’ll blame someone else when it fails.” https://t.co/2YuSFZ1RSk

Kinzinger was hardly alone in raking Hawley’s plan across the coals on Twitter:

Is there no other way for him to raise this very whiney issue? Yes, there are problems with Big Tech™️ but the answer isn’t to grind our democracy to a halt so that Hawley can gear up his 2024 campaign. It’s a very Cory Booker thing to do. https://t.co/MGHHFiMzCD

This statement’s genre is: “how can I object without tying myself to the craziest conspiracy nuttery and justify it by finding some sliver of precedent, but not do something that will actually change anything, so I can win support of Trump’s base when I run for potus in 2024?” https://t.co/S4oG93q5kW

There was no fraud. Just because millions of voters believe the lies of the president about fraud does not mean those voters deserve to be heard. This argument makes no sense.

The false equivalence here is staggering:

In 2004 a handful of House Dems protested to highlight disenfranchisement.

In 2016, everyone in US/ally Intel swore that Russia interfered.

In 2020, the election loser called foul and was laughed out of 59 courts INCLUDING SCOTUS! https://t.co/ar8liGajET

Senate Minority Leader Chuck Schumer also seemed to get in on this indirectly by referencing how many electoral votes Biden won.