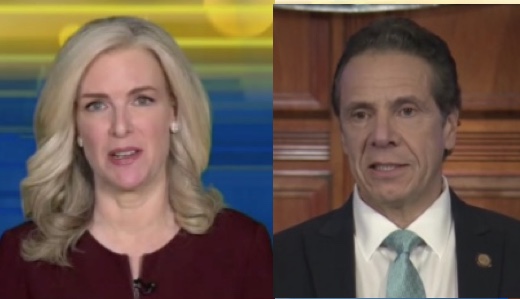 It’s one of the lasting political media battles over the last year has been one that no one could have ever predicted. New York Governor Andrew Cuomo and Fox News Chief Meteorologist Janice Dean. The issue, of course, is the governor’s handling of the Covid-19 pandemic which has led to tens of thousands of deaths in New York State — a significant percentage to the hundreds of thousands across the nation.

Cuomo earned early (premature) praise from a fawning media, largely due to his reassuring tone during coronavirus-related press conferences early in the outbreak. His “we’re all in this together” mien was a stark contrast to President Donald Trump’s “leave it to the states,” which, in hindsight, wasn’t … great.

But Dean, known for her remarkably bubbly and consistently apolitical demeanor on Fox & Friends, was among the first to call BS on the Cuomo lovefest. Outraged by the death of both of her husband’s parents due to Covid-19, she was the first to pull back the veil and bravely call Cuomo out for mistakes she saw him make early in the pandemic, namely the sending of Covid-19 patients to nursing homes. That decision alone may have led to thousands of deaths.

Since then, Dean has been on something of a mission to call out Governor Cuomo’s apparent cult of personality. There was an autobiography published about how he successfully handled a pandemic, perhaps prematurely published amidst a still raging pandemic.

On Tuesday, Dean hit out at what she saw as a botched rollout of the vaccine, which she called a “disaster.’”

“It is just another leadership failure from this governor,” Dean said.

The Governor’s office has not cottoned to Dean’s consistent criticism, though they have largely ignored it. But this last comment of hers? It inspired pushback.

Richard Azzopardi, a spokesperson for Cuomo, told DailyMail.com in response: “Every state has had issues with vaccine distribution because of lack of federal funds but we’re rapidly ramping up distribution and currently have administered more than 60 percent of the vaccines we have.”

But then he added the rather rude, if not sexist, dig. “Last I checked, she’s not a credible source on anything except maybe the weather.”

Is he suggesting that weather girls should just shut up and look pretty? Maybe not, but I know of a handful of women that recoiled at reading that rude rejoinder.

The truth of the matter is that both the Governor’s office and Dean are correct in their assessment. There is no roadmap for municipalities to handle a pandemic of this scale, so of course, there will be significant bumps in the road. And not every decision made has been a perfect one, so it might be wise for Governor Cuomo to occasionally own his mistakes and take a break from the premature victory laps.

I’ve long advocated that the best possible thing that could emerge from the Cuomo vs. Dean conflict is a meaningful and on-camera sit-down between them. While her criticism of the governor has been tough and unrelenting, Janice Dean is well-known, in media circles, to be genuinely kind and genial. And Governor Cuomo appears to possess an EQ that is 99th percentile.

In this hyper divided world, we need to engage with our philosophical and political rivals in a meaningful manner that still abides by a basic social contract.  So let’s get Gov. Cuomo and Janice Dean to sit down for a one hour interview, and the harmonic convergence can officially begin.