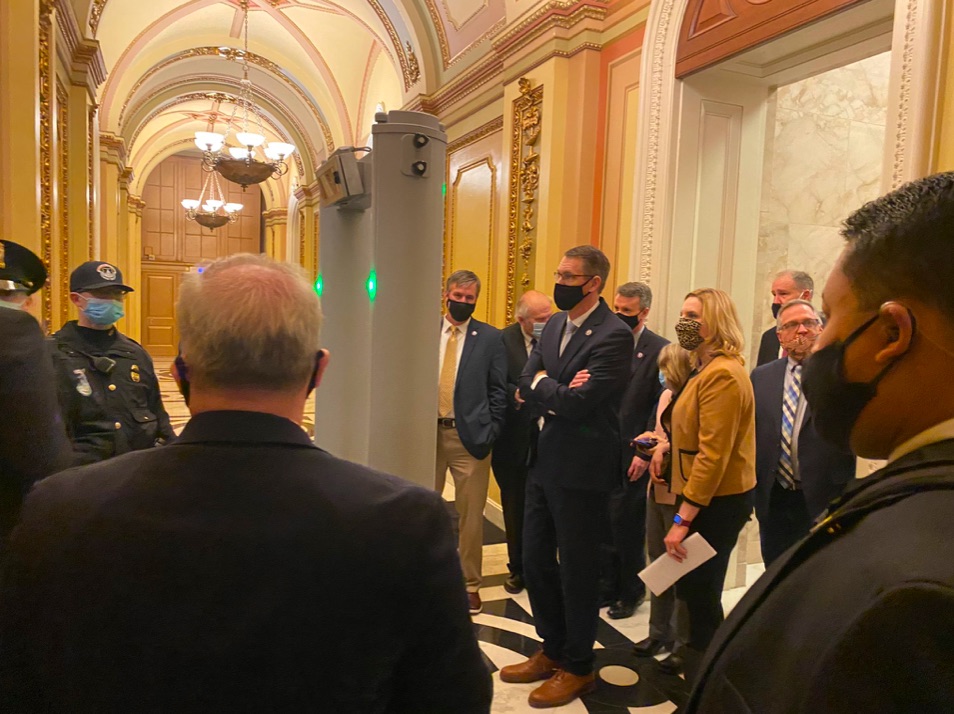 Rules for thee, but not for me?

House Republicans furiously lashed out at — and brazenly disobeyed — new safety protocols that American schoolchildren, air travelers, and sports fans must abide by every day. Newly-installed metal detectors put in place outside the House chamber — in response to last week’s violent insurrection in the Capitol — ignited both anger and hyperbole among some of the most ardent fans of the president who incited that attack.

Per a NBC News report, the extra layer of security quickly became a flash point for some Republican lawmakers, who wanted to enter the House chamber unimpeded for floor votes. After lines began forming to enter and Capitol police begin asking to wand members of Congress who triggered the detectors, a small contingent of far right Republicans began to complain and flout the protocols.

CNN’s Congressional correspondent, Manu Raju, captured some of the outrage.

House GOP furious at new mags outside the chamber. Reps. Markwayne Mullin and Steve Womack erupted at Capitol Police as they were forced to go through the mags. Womack shouted “I was physically restrained!” And Mullin said “it’s my constitutional right” and “they cannot stop me

Rep. Steve Scalise, the No. 2 Republican, told me that the situation is “untenable” because it “impedes the ability of members to come and vote. This is our job.” These are the lines pic.twitter.com/Z6WP9ZXmC0

One House Republican from Arizona, Rep. Debbie Lesko, angrily condemned the idea that Capitol police should be able to sweep to ensure no weapons were being brought onto the House floor. This new security measure, which is already in place in thousands of official government offices and courthouses around the country, amounted to “being wanded like criminals,” she claimed. Lesko then upped the ante of absurdity, saying the upgraded security response to the unprecedented attack on the Capitol was tantamount to living in “[Nancy] Pelosi’s communist America.”

For members of Congress to enter the floor of the U.S. House, we now have to go through intense security measures, on top of the security we already go through. These new provisions include searches and being wanded like criminals. We now live in Pelosi’s communist America!

Congressman Greg Steube (FL), not at all overreacting, described the new layer of House security protocols with a term more commonly used to characterize things like war crimes and genocide.

Rep. STEUBE, a Republican, complains on the floor about “atrocities” occuring on the House floor today — the installation of new metal detectors installed outside the House chamber, which he says “prevent members from exercising their Constitutional rights.”

Ohio Congressman and election fraud conspiracist Rep. Jim Jordan also complained about the inconvenience that everyone who boards a commercial airplane must endure.

Jim Jordan is on the floor complaining about members needing to walk through metal detectors.

Fellow Ohio Rep. Steve Stivers made the judicial assessment that the metal detectors are “unconstitutional.”

Rep. Steve Stivers (R-Ohio) just told the cops at the door he believes the magnetometers are unconstitutional.

MAGA superfan Rep. Louie Gohmert (TX) simply skirted around the screening and all but dared the police to do anything.

Others walked through, set off the magnetometer, but then refused to stop for a personal search.

Another member — didn’t catch who it was — sets off the metal detector.

He doesn’t stop to get wanded and the Capitol Police don’t stop him.

Another member — I believe it was Russ Fulcher — just pushed his way through. He went through the metal detector, set it off, ran into a cop, and then pushed his way past her.

Among that group was newly-elected Congresswoman Lauren Boebert (CO), who was last making headlines for faking a video about carrying a concealed weapon to Congress — which would be illegal.

RIGHT NOW-> Congresswoman Lauren Boebert, who has bragged about her desire to carry a weapon on Capital Hill is currently in a standoff with Capitol Police at the newly installed Metal Detectors outside the chamber doors.

Boebert walked through with her bag which set off the mags. She refused to offer the bag over to be searched and is now in a standoff with Cap Police.

Democrats in Congress, however, found the selective GOP outrage a bit too much. Newly-elected Rep. Cori Bush (MO), mocked the Republican pushback as little more than entitled, out-of-touch whining: “Have you ever had a job before?!”

To my colleagues who won’t go through the metal detectors:

Have you ever had a job before? If you work at McDonald’s and you don’t wear the uniform, you don’t work that day.

If you won’t abide by the rules of this job, go find another one 👋🏾 https://t.co/rPO2xek1iB

Added Rep. Don Beyer to the GOP hyperventilating: “Get over yourselves”:

Do these people not understand that literally everyone else has to go through metal detectors to get in here? Average people do not get to bring guns into the United States Capitol in normal times. Get over yourselves