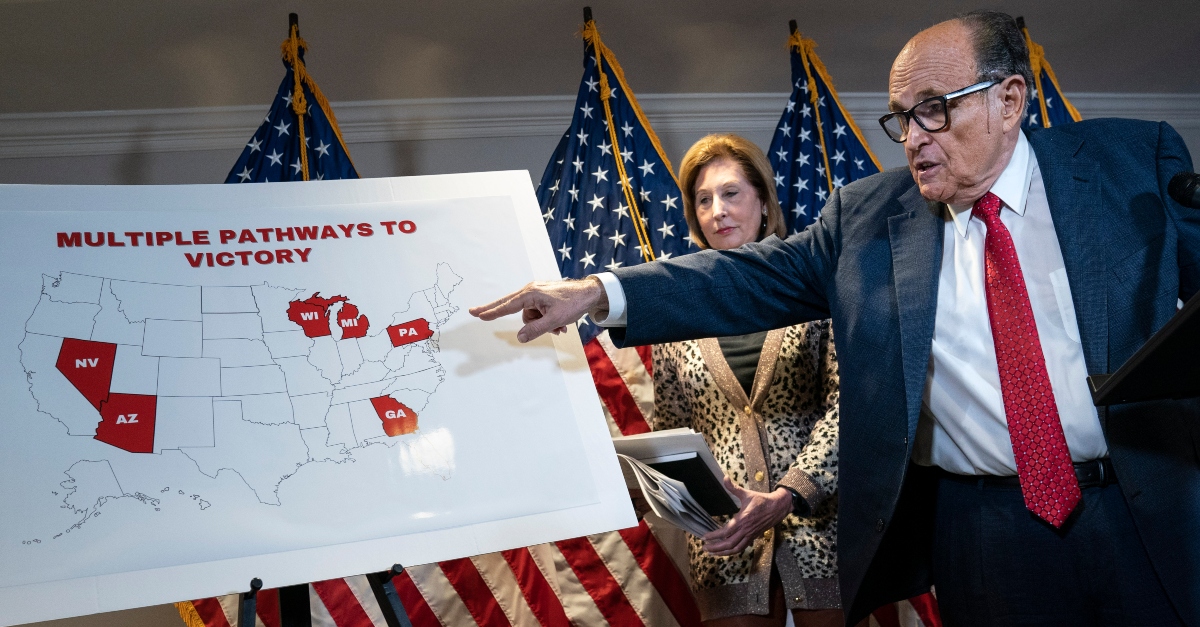 From far away, the dozens of lawsuits attempting to overturn President-elect Joe Biden’s victory look like different beasts, but closer inspection reveals that many are a handful of charities apparently coordinating as different tentacles of the Trump campaign—like a Kraken, if you will.

“Petitioners do not disclose that their request is part of a coordinated effort launched this week to ‘file federal and state lawsuits challenging the presidential election results in Wisconsin, Pennsylvania, Michigan, Nevada, Georgia, and Arizona,’” the Democratic National Committee wrote in response to one such legal blitz by the Thomas More Society, a not-for-profit religious group.

The Thomas More Society listed Rudy Giuliani as a “partner” in that litigation in a press release.

“The ‘partners’ in this new wave of litigation are seeking to demonstrate a variety of ‘common violations across the six states,’ with the goal of using the judiciary to deliver the presidency to Donald J. Trump, never mind how the voters have spoken,” the DNC brief continues.

The Thomas More Society—named after the Catholic saint, lawyer and philosopher behind Utopia—and based in Chicago, Illinois, is far from the only 501(c)3 chipping into Trump’s efforts to invalidate his electoral defeat in a manner that even mainstream commentators have likened to an attempted “coup.” Supporters of the effort can even claim a tax write-off.

Others have included the Texas-based True the Vote, the Michigan-based Great Lakes Justice Center, and the Arizona-based American Freedom Law Center, a group whose president David Yerushalmi is listed by the Anti-Defamation League as an anti-Muslim extremist.

Here is a breakdown of some of the 501(c)3s and 501(c)4s behind the spate of last-gasp, pro-Trump lawsuits nationwide.

Lawyers Sidney Powell and Lin Wood also claim to have set up 501(c)4s—which are not tax-deductible—chipping into the effort. Both declined repeated requests to share exemption applications for the purported charities, and the names of neither organization appears in searches for Florida and Georgia business entities.

The website for Powell’s organization, called Defending The Republic, directs donors to write checks payable to her law firm, Sidney Powell, PC, a fact that a representative for the anti-corruption watchdog Citizens for Responsibility and Ethics in Washington found concerning.

“You send the money to the nonprofit, not to a person who works there,” Libowitz added. “No one sends CREW donations to my bank account.” 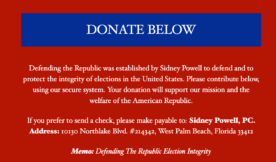 Screenshot from Sidney Powell’s website for Defending the Republic

Asked about how she handles donations written to her firm, Powell told Law&Crime: “All contributions for DefendingTheRepublic are being held in trust while we are working around the clock to fight the corruption and my lawyers are dotting eyes [sic] and crossing T’s.”

Powell’s post-election litigation has been known for dotting neither “eyes” nor “i’s” and being rather slapdash about the “t’s.” She filed a federal complaint that misspelled the word “district” twice in the caption as “DISTRICCT” and then, a few words later, “DISTRCOICT,” before flubbing the name of her lead plaintiff. Likening her legal offensive to a “Kraken”—a mythical, octopus-like monster—Powell filed lawsuits with Wood in three states: Michigan, Georgia and, on Tuesday, Wisconsin.

Wood, who represents accused Kenosha murderer Kyle Rittenhouse and has a QAnon hashtag on his Twitter bio, lashed out at a reporter who requested paperwork for his #FightBack Foundation.

“Are you a donor to #FightBack or just trying to attack my organization as you are attempting to do so with Sidney Powell’s organization?” Wood asked Law&Crime in an email. “Send me some of your recent reporting so that I can determine if you are a propaganda arm of the third party bad actors seeking to overthrow our Constitution or a professional journalist who adheres to journalistic standards.”

Under federal law, 501(c)4 charities must make certain exemption applications available for public inspection, and there is no exception for charities that disagree with the editorial decisions of a reporter. Neither Powell nor Wood immediately provided the formally requested paperwork. Wood said that he sent the request to his charity’s counsel K. Lawson Pedigo, who defended the lack of transparency by claiming that his client filed paperwork not subject to public scrutiny.

“#FightBack filed IRS Form 8976 in accordance with the guidelines set forth in IRS Revenue Procedure 2016-41, which form is not subject to disclosure per the IRS,” Pedigo wrote in an email.

Libowitz explained that this is not the document that gives the group its exempt status in the eyes of the IRS, which would be the publicly accessible Form 1024-a.

Before Wood became co-counsel in Powell’s “Kraken” lawsuits in Michigan and Georgia, the celebrity lawyer sued as a plaintiff in the Peach State, where Trump-appointed U.S. District Judge Steven Grimberg said his lawsuit was meritless and lacking in standing. During a hearing in that case, Wood’s attorney Ray Stallings Smith III disclosed that Trump’s campaign also retained him as counsel. The Trump campaign recently distanced itself from Powell, after her unforgettable press conference with Giuliani.

A Catholic saint executed by King Henry VIII whose best known fictional work created the concept of “Utopia,” Sir Thomas More coined the word for an imaginary and perfect society from the Greek words for “no place” (or “happy place,” to some). Scholars note that the idyll of More’s creation could have been described as radical when first published in Latin in 1516, but it is a far cry from a modern democracy. Slavery existed in More’s utopia, though the children of slaves could be set free.

The saint’s namesake charity, the Thomas More Society, has sought to invalidate election results across the country with help from Giuliani, whom the organization’s press release described as a partner of its so-called “Amistad Project.”

“The Amistad Project has uncovered an organized effort involving multiple private organizations and partners working with government officials to design, fund, and implement an improper and illegal scheme to create an unconstitutional two-tiered election system to deliver the presidency to Joseph R. Biden,” Giuliani falsely claimed in a press release, in sharp contrast to his concession to a federal judge that he was not alleging fraud.

“This is not a fraud case,” Giuliani previously told U.S. District Judge Matthew Brann, in a remark quoted by the Third Circuit Court of Appeals and a judge of the Supreme Court of Pennsylvania.

The Pennsylvania litigation included the ill-fated appeal of the case associated with Giuliani, which won the scathing rebuke of a Trump-appointed appellate judge and an all-Republican-appointed circuit panel. The Chicago-based group, which reported more than $6 million in revenue in 2018, did not immediately respond to emails to their press representatives and attorney Erick Kaardal requesting comment.

Unlike political campaigns, 501(c)3 charities do not need to disclose their donors publicly in great detail on tax filings known as form 990s, which become public on an annual rather than quarterly basis. But one of the charities involved in Trump’s post-election lawsuits had additional transparency thrust upon them.

Based in Houston, Texas, True the Vote filed election lawsuits in four federal courts before precipitously withdrawing from all of them.

That angered donor and venture capitalist Fred Eshelman, who sued the company in a federal complaint alleging that its founder Catherine Engelbrecht agreed to pay him back his $2.5 million contribution if their lawyer James Bopp did not perform the legal work promised.

“Those requests [for a refund], however, were met with platitudes and empty promises of follow-up,” Eshelman complained, adding that “nothing was accomplished” with the money he spent.

Eshelman’s massive donation was more than five times than annual revenue True the Vote reported in 2017, the last filing publicly available, opening a window into how lucrative the election lawsuits has been for charities on board with it.

“When the consultants called us on November 5, it seemed like an answer to prayer,” Engelbrecht told Law&Crime in a statement. “Now, it seems like a nightmare.”

Ill-fated though it was, True the Vote’s since-withdrawn lawsuits created real if truncated court dockets.

“The decision to abandon those cases was made in concert with counsel for the Trump campaign,” Eshelman’s lawsuit alleged.

One lawsuit filed by Bopp, the mastermind of the Republicans’ Citizens United litigation that helped give rise to super-PACs, promised “evidence will be shortly forthcoming” before withdrawing their complaint without that evidence on the morning of the hearing. The same group also pulled out of an election lawsuit in Michigan based on the false claim that the refusal of Wayne County canvassers to certify made it unnecessary. The canvassers in the county and state certified the vote.

Appearing in the dossiers of the anti-hate watchdogs at the Southern Poverty Law Center and the Anti-Defamation League, American Freedom Law Center’s president David Yerushalmi lent his group’s legal firepower to Trump’s election-toppling quest in Michigan—side-by-side with the Thomas More Society and another charity.

Yerushalmi earned the Southern Poverty Law Center’s scorn with such pronouncements as “Islam seeks our destruction.” He has backed a number of lawsuits with right-wing blogger Pamela Geller seeking to put incendiary ads on the public transit systems of major U.S. cities, sometimes successfully taking advantage of broad First Amendment protections for such provocations. Other efforts fell flat, like Yerushalmi and Geller’s bid to force New York City to run mass transit ads depicting a Palestinian man with a keffiyeh alongside the message “Killing Jews is Worship,” before the Second Circuit Court of Appeals upheld the city’s ban.

Joining the election-lawsuit offensive, American Freedom Law Center’s attorney Robert Muise is one of the lawyers in the latest iteration of a lawsuit by two Michigan voters who want to claw back the Wolverine State’s certification of its results. One of those voters, Angelic Johnson, withdrew an earlier version of her lawsuit only to refile on Nov. 26, some three days after Michigan certified the results.

Muise, who was listed as counsel in both state and federal election litigation, did not respond to an email requesting information about how the group got involved in the election lawsuits and whether it coordinated with the Trump campaign. Muise appeared in one lawsuit alongside counsel for both the Thomas More Society and Great Lakes Justice Center, an organization behind a spate of litigation in Michigan.

A group focused mainly on Michigan litigation, Great Lakes Justice center is a project of Salt and Light Global, a Lansing-based 501(c)3 that reported $122,612 in its last fiscal year that ended in June 2019.

Its vice president David Kallman has been behind several lawsuits seeking to discredit elections in Wayne County, whose seat is majority-Black Detroit.

Shot down all the way up to Michigan’s Supreme Court, Kallman’s suit included an affidavit with a theory that Dominion Voting Systems switched votes from Trump that handed victory to Biden, discredited claims that a judge found unsupported, unsubstantiated and “not credible.”

That was not the only spurious theory peddled by the group.

Detroit’s attorney David Fink pointed to one tall tale that illegal votes had been entered for people with birth dates of “Jan. 1, 1900,” making such voters 120 years old. Noting that such an implausible voter age would be a ludicrous way to execute a fraud, Detroit’s attorneys held it up as an example of the ignorance of the voting system masquerading as smoking-gun evidence. In fact, the date was a common placeholder for the system in cases where a voter’s date of birth was not immediately available to election workers. True to the meaning of “placeholder,” those dates were changed once that information was learned.

On top of the failed state litigation, Great Lakes Justice Center attorneys have been listed on a federal lawsuit from which they withdrew.

Kallman, who previously played down the importance of Dominion voter machines to his lawsuit in a phone interview with Law&Crime, did not immediately respond to an email requesting comment about his group and its ties to Thomas More Society, American Freedom Law Center and the Trump campaign.