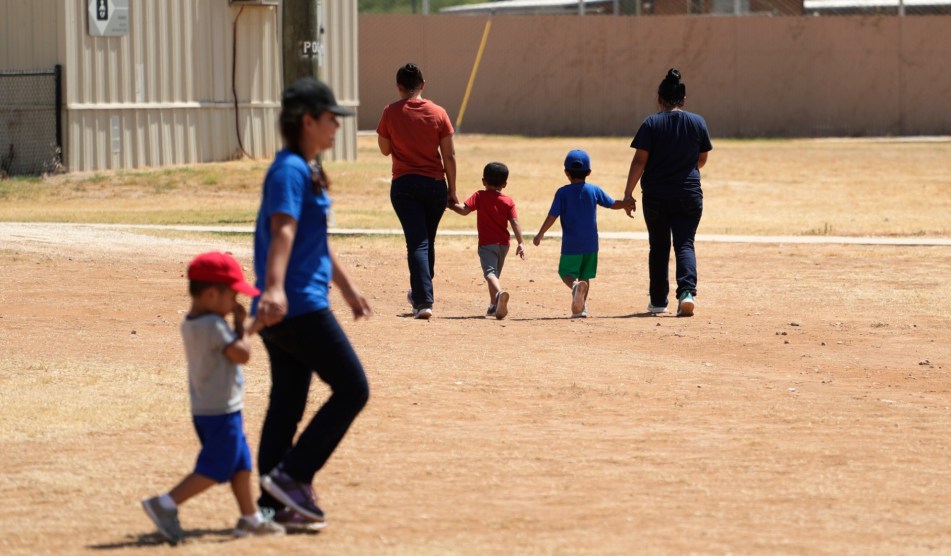 Time has run out for Immigration and Customs Enforcement to release the more than 100 children currently being held in immigration detention. After several delays, a federal judge’s ruling that ICE must release minors held in the agency’s three family detention centers is set to go into effect today. On Saturday, the Trump administration asked Judge Dolly Gee of the US District Court of Los Angeles to delay the order again, but Gee held firm. Her message was clear: Release the children—but don’t even think about ripping them away from their parents without their consent.

In April, Gee ordered ICE  “to make every effort to promptly and safely” release children in the wake of the coronavirus pandemic as part of her oversight of the Flores settlement, which set standards for the treatment of children in immigration custody. The settlement states that children can be held by ICE for no longer than 20 days. But it says nothing about the parents detained alongside their children. So following Gee’s decision, ICE presented parents with an unthinkable decision: Release their children to sponsors and be separated, or remain together in detention and risk contracting COVID-19. As my colleagues Fernanda Echavarri and Noah Lanard reported:

Lawyers with the legal-aid groups RAICES, ALDEA, and Proyecto Dilley say ICE effectively ambushed their clients and blocked parents from consulting attorneys before answering that question. In some cases, parents were asked if they would want to put their children up for adoption or send them to foster homes, said Andrea Meza, RAICES’ director of family detention services. “Our clients were appalled that this would even be a question posed to them,” Meza added. “One client stated that he and his family expected more coming to the United States and seeking protection.”

Judge Gee would follow up her April order with an even stronger one in June, likening the threat of coronavirus in the family residential facilities to a house “on fire” and putting a firm deadline on the kids’ release: July 17. (This deadline was then delayed by 10 days after both sides asked for more time.)

In the meantime, RAICES and ALDEA lawyers have tried to secure the release of entire families by way of a separate lawsuit, also citing the imminent threat of COVID-19. On Wednesday, they filed a preliminary injunction requesting the immediate release of families, but it was denied by a different judge.

For advocates, it was another sign pointing to the inevitability that detained families might once again be faced with the “binary choice” of releasing children to a sponsor and facing indefinite separation, or staying together inside. Another indicator? An influential attorney representing child detainees has come out in support of asking parents to make this choice. As Tina Vasquez at Prism lays out, Peter Schey—the veteran LA lawyer who has argued Flores on behalf of children since the case’s inception in 1985—has clashed in recent years with other immigration lawyers over his support for a child release protocol that amounts to family separation.

On July 21, RAICES and ALDEA lawyers filed a motion to intervene in the Flores case, saying the interests of the children “are not adequately represented and irretrievably at odds” with Schey’s opinion. They say that especially in the wake of a pandemic, any policy forcing parents to make such a choice is inherently coercive, and that ICE should release entire families to protect them from the virus. Schey replied by saying he didn’t believe any intervention by the other lawyers was necessary.

The government took this internal division among child immigration attorneys as an opportunity to request another delay in the deadline, but Judge Gee rejected it. In a last-minute order issued Saturday, she said in no uncertain terms that the deadline for release would remain firm, and that ICE has been expressly forbidden from separating children from their parents without their consent. Until a process for waiving that consent is established, things remain at a standstill.

Though reports submitted to the courts indicate that ICE has improved sanitary conditions inside its detention centers, the threat of the coronavirus is still very real. Forty-seven cases of the virus have been documented at the Karnes family detention center and one at the Dilley detention center, both located in Texas. And lawyers say their clients still aren’t being adequately protected.

On a video conference hosted by RAICES, Shalyn Fluharty, the director of Proyecto Dilley, a group that offers pro bono legal representation to families detained inside the South Texas family detention center, described the practice of cohorting, keeping people who have tested positive for COVID-19 together in an isolated part of the facility, as a “failure” at the center. Maldonado described a Fourth of July celebration of over 100 people at Dilley where there was “not consistent mask-wearing.”

As of July 22, 3,781 people in ICE custody have tested positive for the virus since February, and four detainees and four guards have died.

Maldonado believes that the pandemic should be enough to compel the government to release people, but doubts that it will. “I believe they are going to continue fighting to detain families—some with children as young as one year—simply to be cruel.”