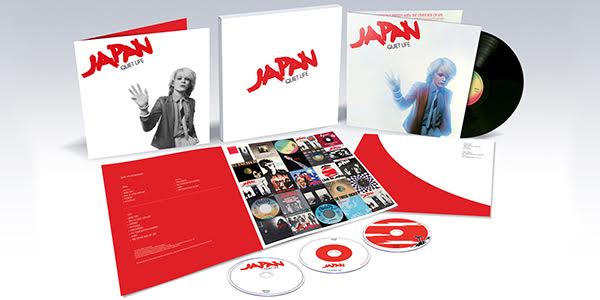 Japan’s classic album Quiet Life is to be reissued as special Deluxe, CD, LP and Digital formats on 5 March.

Quiet Life, released in December 1979, was the third, final and most successful release for the band on the Hansa Records label. The album and its attendant singles; Quiet Life and All Tomorrow’s Parties, as well as other non-album singles included on the new deluxe version; Life In Tokyo, European Son and I Second That Emotion, acted as a forerunner for the alternative, new wave and New Romantic sound of the early 80s.

While the album wouldn’t make the Top 50 in the UK the first time around its enduring influence would be felt for decades to come and it is now universally acknowledged of one of the great British albums of the era.

Quiet Life is now the subject of a major new reissue featuring a brand new half-speed remaster of the original album, alternate mixes, B-sides, singles, rarities and live material including an audience recording of the sought-after ‘lost’ Live At Budokan show from March 1980 previously only available as the four-track EP Live In Japan.

Speaking about Quiet Life in 2019, Japan Drummer Steve Jansen said: “It felt like a more accomplished body of work as a group of musicians who had begun to find a voice rather than simply proving the ability to write/play music.”

Keyboard player Richard Barbieri also acknowledged the seismic shift that the band had experienced: “It’s as if we discovered sophistication, subtlety and nuance overnight. A big change was that David started writing more on the piano and I think this produced stronger song material at that time. This lent itself towards more open and spacious sounding pieces and we started to understand about how to build arrangements.”

The album is available to pre-order now and you can also listen to the Japanese 7″ mix of Quiet Life here.

Fall In Love With Me

The Other Side Of Life

Sometimes I Feel So Low (Live In Japan)

Fall In Love With Me

Sometimes I Feel So Low

I Second That Emotion