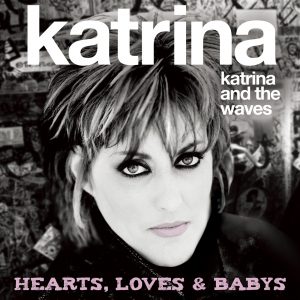 Katrina Leskanich, former frontwoman of Katrina & The Waves, is back with her first new solo studio album in five years – Hearts, Loves & Babys.

Released on 28 August, the record is a deeply personal look into Katrina’s world that the Walking On Sunshine singer will release on her own label, tackling topics from love and relationships to bereavement and grief.

“I was digging deep,” she says of her new work. “I’m a very private person but a strong person with a bit of a soft core. I think some of that probably came out – [it] kind of surprised me.”

However, the first track to be released – Drive, which you can listen to from 24 July – is an escape from the more heartfelt material we’ll hear on Hearts, Loves & Babys. Drive reminds us of the simple pleasure of hitting the open road. “I [didn’t] want to think about death,” she explains. “I wanted to think about something fun to cheer me up. I was dreaming about a road trip. One of my absolute favourite things is just to drive and not even have a plan.”

Katrina writes openly about her late mother in two tracks from the new album, most poignantly on Move On when she details her mother’s final moments: “It was tough, writing that,” she says. “Sometimes people hang on through a lot of pain. I call it a death-bed lullaby, sitting at the side of the bed with someone saying, ‘It’s OK to move on.’”

Yet the album will stay true to her pop-rock past, with high energy moments and feel-good dance tracks creating stand-out moments, too.

Tune into The Ken Bruce Show on BBC Radio 2 at 11:15am this Friday 24 July to hear her brand new single, Drive, and pre-order Hearts, Loves & Babys here.