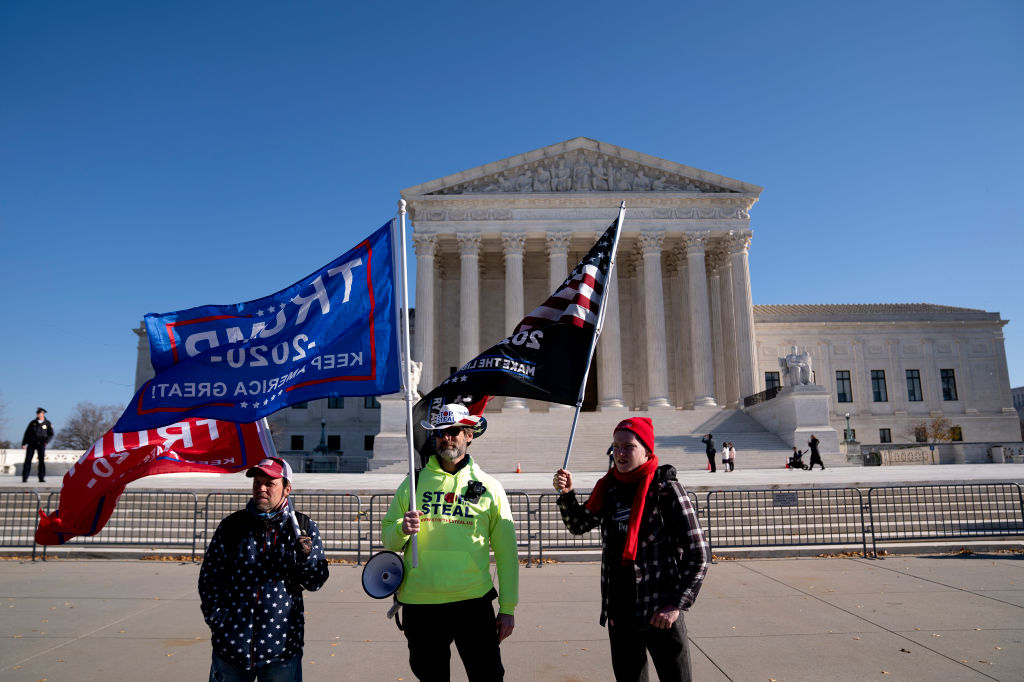 After the Court issued its one-page summary denial of Texas’ standing, it effectively slammed shut the door on the Trump campaign’s most highly-touted gambit to re-instal Donald Trump as president by overturning the will of the voters in four swing states. Coming weeks after President-elect Joe Biden was called the winner by all major news organizations, all the states had certified their votes, and the Trump campaign had lost dozens of previous lawsuits, this latest defeat inspired a tsunami of liberal Schadenfreude and I-told-you-so’s.

📺WATCH! #SCOTUS just put the FINAL nail in the coffin for Trump and his allies. While this is the end of a dark chapter, we can’t ignore the parade of sycophants that tried to disenfranchise millions of their fellow Americans.

In a way, Alito and Thomas smacked this down hardest of all.

The other 7 Justices said essentially: we wouldn’t even let Texas in the door.

Alito and Thomas said: we *would* let Texas in the door, and then we’d throw them out.

After the Supreme Court calls a lid for the Trump presidency. https://t.co/Po7i2ghKjn

He won MI/WI/PA by 3x as much as Trump

A Confederacy of Dunces https://t.co/zv1bJmKrZD

Defeat. Dismissed. Denied. That’s the resounding and unequivocal answer Donald Trump and his craven cronies get from the Supreme Court. But the effort was, and remains, dangerous, dire, and fundamentally undemocratic.

Number of House Republicans who signed onto Trump lawsuit: 126

Words it took Supreme Court to reject the case: 126 pic.twitter.com/9gtqJm0vVN

You’re fired, Don. Supreme Court agrees. Clean out your desk and put your fat ass on the street.

.@seanhannity told me last night it would be a “no brainer” that the Supreme Court would take up the Texas case.

The Supreme Court wants to avoid having to listen to Ted Cruz as much as decent Americans do.

Trump was rejected by every woman on the Supreme Court.

Trump lost the Electoral College by 74 votes, lost the popular vote by 7 million votes then lost 56 post-election lawsuits including two that went to the Supreme Court and were rejected 9-0.

Tired of winning yet?

But on the other side of the political spectrum, Trump supporters took the news hard — so hard, in fact, that some of them bemoaned the future of the country, when not publicly turning secession and coup-curious, or engaged in outright denial, promising that the next case brought by the Trump campaign’s legal team was sure to be the one that turns things around.

It is unfortunate that #SCOTUS decided not to take this case and determine the constitutionality of these four states’ failure to follow federal and state election law.

I will continue to tirelessly defend the integrity and security of our elections.https://t.co/TIbse4yKxb

The @TexasGOP is out with a statement in the wake of the Supreme Court decision, all but calling for secession:

“Perhaps law-abiding states should bond together and form a Union of states that will abide by the constitution.” pic.twitter.com/4bB3gk88t4

Pro-Trump and QAnon communities have been living the last month genuinely, truly assuming Trump would still be president for a second term.

Tonight is hitting them like a ton of bricks. They sincerely did not expect this outcome and are running out of legal options. https://t.co/jVqyWefFey

The Supreme Court just told us that we are no longer a Constitutional Republic and our votes no longer matter.

The PENNSYLVANIA CASE is still alive (Mike Kelly/Sean Parnell Vs the Commonwealth of Pennsylvania) Georgia is unsettled. Michigan lawsuits not over. NOT OVER.

The true casualty of the Supreme Court’s decision is an erosion of the power of state legislators to make election law.

There’s still evidence that needs to be considered. The House may be the last forum available for us to present our arguments. pic.twitter.com/OCrLmvINpn

A travesty of justice and an insult to the rule of law.

Courts thus far seem to have let fear and/or politics deny the American people the fair adjudication of the core issue that the battleground states broke laws on mail-in ballots and that this law-breaking led to Joe Biden’s purported victory. @RealDonaldTrump @JudicialWatch

If all of President Trump’s legal challenges do not succeed, every single Biden nomination should be given the Kavanaugh treatment in the Senate.

1. The irony of the Supreme Court’s latest duck is that, in the end, it may have ruined itself — that is, if the Democrats take both Senate seats in Georgia, and Biden is sworn in as presidents,