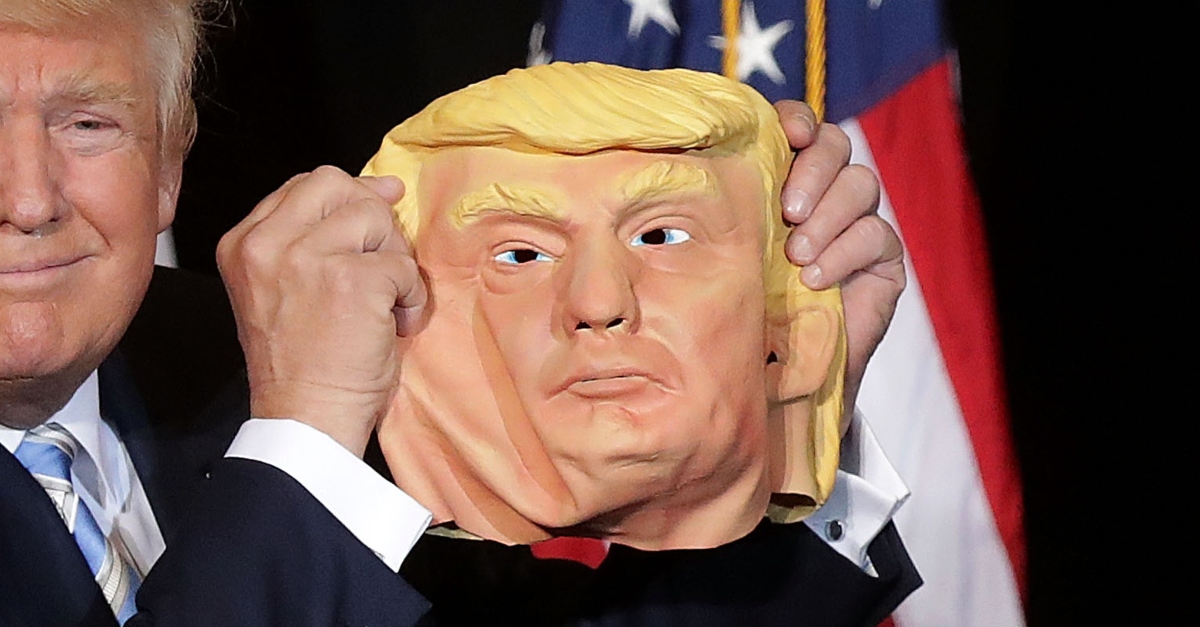 Then-candidate Donald Trump seen, incidentally, holding a rubber mask of himself in 2016.

Authorities in California say a man shot his estranged brother-in-law. The victim survived. What’s really striking about this story is the alleged attire of defendant Gerald Jacinth, 75. Investigators claim he was wearing a “rubberized over the head mask resembling Donald Trump,” a white beard, and a Santa hat. From the Rohnert Park Department of Public Safety:

He had parked his black Dodge car across the street from the victim’s house wearing an over the head mask resembling Donald Trump, white long curly beard and a Santa hat as he made his way up the driveway.

Investigators describe defendant and victim as estranged. They say they got a 911 call from a woman on Saturday morning about her 77-year-old husband being shot. Officers were initially told that the shooter fled in a vehicle featuring an out-of-state plate.

Authorities say that Jacinth, a Las Vegas resident, parked his vehicle across the street. In his Trump/Santa get-up, he allegedly had a “small present” and a duffle-bag. He walked up to the victim’s open garage, where he was approached by the 77-year-old man. Investigators said the brother-in-law did not recognize Jacinth. From authorities:

The victim did not recognize Jacinth so he asked if he could help him. Jacinth held the present up and said he had a special delivery. Once closer, Jacinth tried to hand the present to the victim. The victim was reluctant to take the present and refused.

Investigators said that Jacinth raised the duffle-bag and shot the man a first time. There was a second shot when the 77-year-old retreated. The wounded brother-in-law managed to take a picture of the fleeing Jacinth getting back into the Dodge, according to officials. Authorities said they found a suspicious package on the driveway, but it turned out to be a towel wrapped in the box.

Investigators said they were able to find the shooter. They claimed to discover a .380 handgun in a duffle-bag, as well as the Trump mask, and “long white curly beard.”

Jacinth is charged with a count of attempted murder. It is unclear if he has an attorney in this matter. Online records show he is scheduled for a court date on Tuesday.