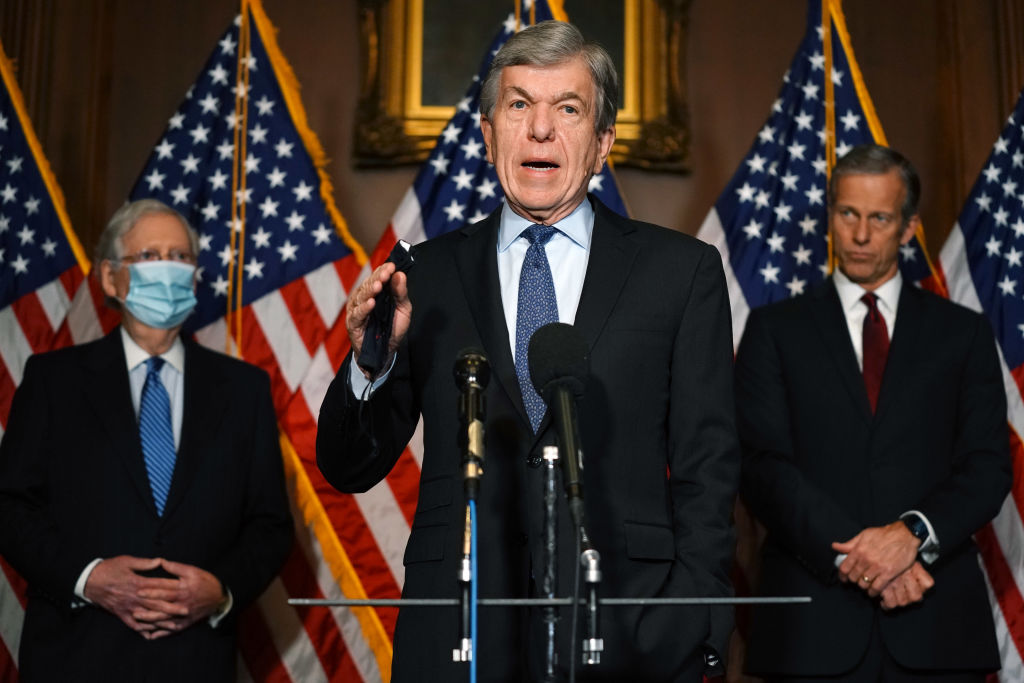 Recalcitrant Senate Republicans, who have ducked and dodged commenting on the outcome of the presidential race in the weeks since the election, finally displayed signs of acknowledging reality after Monday’s Electoral College vote. But not all of them could yet bring themselves to accept the results.

Notably, the second and fourth-ranking members of the Senate GOP leadership, Majority Whip John Thune (SD) and Chair of the Republican Policy Committee Roy Blunt (MO), publicly recognized President-elect Joe Biden and said it was time for their party focus on a future without Donald Trump as president after January 20th.

As Politico found in its round-up of Senate GOP reactions, Blunt said after Biden received 306 electoral votes:  “There’s clearly a constitutional president-elect.” Likewise, Thune conceded that “at some point you have to face the music. And I think that once the Electoral College settles the issue today, it’s time for everybody to move on.

Retiring GOP Sen. Lamar Alexander (TN) also made clear his acceptance of Biden’s win, saying: “I hope President Trump will put the country first, take price in his considerable accomplishments, and help president-elect Biden get off to a good start.”

GOP TN Sen Alexander: “The electors have voted. I hope that President Trump will put the country first, take pride in his considerable accomplishments, and help president-elect Biden get off to a good start.”

Those comments sounded similar to Sen. John Cornyn (TX), who warned Republicans not to indulge any more obstructionist shenanigans on January 6th, when Congress certifies the Electoral College vote. “I think there comes a time when you have to realize that despite your own efforts, you’ve been unsuccessful. That’s sort of the nature of these elections,” Cornyn said. “I just hope they realize that it would be futile and it’s unnecessary.”

“Cornyn, Thune signal acceptance of electoral vote for Biden, are dismissive of any GOP challenge”https://t.co/mNLMlzDa6z pic.twitter.com/UzDk57qJ3z

But Republican acceptance of President-elect Joe Biden after the Electoral College vote was still more of a trickle than a dam breaking. This fact was driven home by the Senate’s top Republican, Mitch McConnell, who refused comment on Monday after the latest official act affirming Biden’s win.

Other Senate Republicans didn’t even settle for silence and instead resorted to absurdly contorted rhetoric or outright denials to avoid reality — and possibly ignite the Twitter wrath of a lame-duck president.

Sen. Jim Inhofe (OK) offered a one-word denial of reality when asked if Biden would be the next president: “No.” Sen. John Barrasso (WY) lashed out at being confronted with Biden’s victory, calling it a “gotcha question” to reporters. And Sen. Steve Daines (MT) suggested that until every one of the — baseless — claims of election fraud were litigated, he would not consider Biden a legitimate successor to Trump.

And in what you might call the Senate GOP’s absurd caucus, they tried mightily to obscure their true position with hedging or confusing comments.

“Certainly walking down that path, isn’t it?” Sen. Ron Johnson (WI) said, not making clear what event short of the Inauguration would convince him that Biden will be the 26th president.

Close Trump confidante Sen. Lindsey Graham (SC) said he’d talked to Biden about working with him as the incoming president, and yet in the same breath held out some glimmer of hope for Trump retaining power.

“It’s a very, very narrow path for the President,” Lindsey Graham said. He told me he spoke with Biden “a while ago” for about 10 minutes and had a “very pleasant’ conversation with him, saying he would work him where he could.

But Sen. Kevin Cramer (ND) outdid all his GOP colleagues with a head-scratching statement that doubled and tripled back on itself into an impenetrable logic pretzel that manages to drag the DOJ’s Hunter Biden investigation into the discussion, even though the agency has confirmed the president-elect is in no way connected to it.

“Well, it seems to me that being elected by the Electoral College is a threshold where a title like that is probably most appropriate and it’s, I suppose you can say official, if there is such a thing as official President-elect, or anything else-elect. And there’s inauguration that will swear somebody in and that person will be the president of the United States, but whether you call it that or not, you know, there are legal challenges that are ongoing — not very many — probably not a remedy that would change the outcome but, so, I don’t — again I don’t know how politician refer to another politician but it does look to me like the big race is really between the inaugural committee and the Justice Department at this point so we’ll see how the emails turn out.”