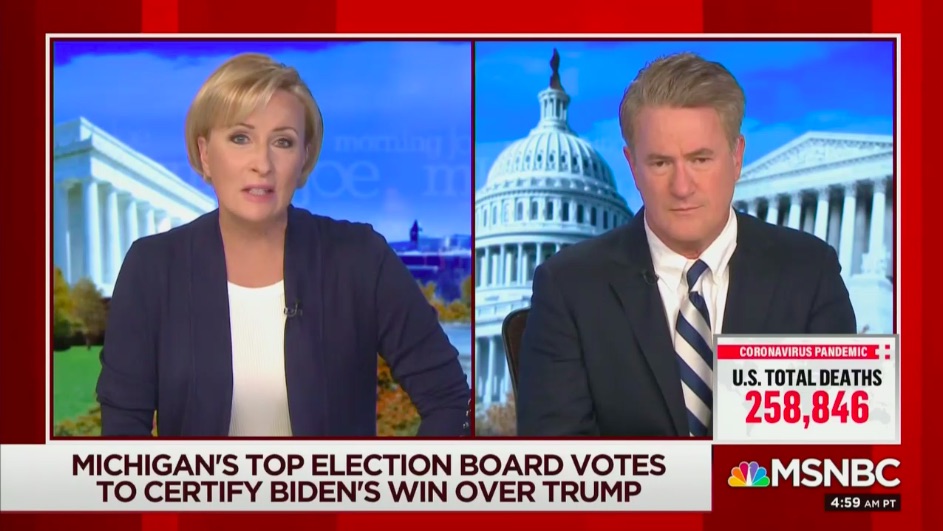 MSNBC scored major ratings wins in the morning and primetime on Tuesday, as Morning Joe and The Rachel Maddow Show swept to victory in overall viewers as well as those in the coveted 25 – 54 age demographic. Meanwhile, CNN extended its win streak topping the competition in the demo across total day and primetime.

According to Nielsen Media Research, CNN handily beat its cable news rivals with 564,000 viewers in the demo in primetime, as MSNBC came in second with 450,000 and Fox News dropped to third with an audience of 432,000. (Of note: Fox News had guest hosts in two of its three primetime shows on Tuesday and CNN had a guest host during its 8:00 p.m. hour as well.) TRMS was the top-rated show in all of cable news with 602,000 A25 – 54 viewers, closely followed in second place by CNN’s Cuomo Prime Time‘s 596,000, and Anderson Cooper 360‘s 551,000 in third. Tucker Carlson Tonight was Fox’s most-watched show in the demo, with 533,000, good enough for fifth place in all of cable news on Tuesday.

MSNBC, however, was the most-watched cable news channel in primetime, thanks to Maddow‘s top-rated performance of 3.68 million overall viewers. The network averaged a total audience of 2.85 million from 8:00 p.m. – 11:00 p.m., beating out Fox News’ 2.69 million and CNN’s 1.98 million total viewers. Carlson continued its streak of being the most-watched show on Fox, pulling in 3.38 million overall viewers, while Cuomo represented CNN’s total audience peak with 2.20 million.