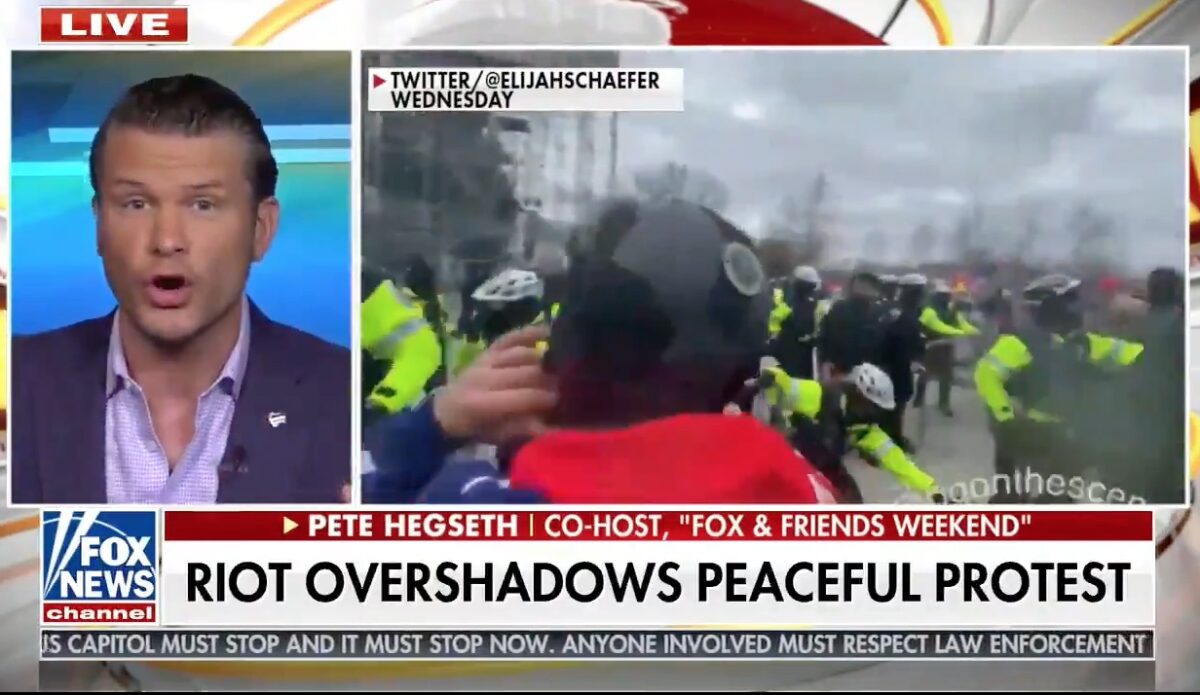 Fox News’ Pete Hegseth made excuses for Donald Trump’s supporters while defending the crowd that gave way to the mob of insurrectionists who stormed the U.S. Capitol over the president’s election defeat.

Shortly after Brian Kilmeade took time on Thursday’s Fox & Friends to pan Trump’s “terrible” post-election conduct, he asked Hegseth “where does the movement” go from here after plunging the Capitol into chaos. Hegseth answered that “the movement is obviously defined by far more than one day,” and he channeled one of the rioters who told him “I’m a born-again American. I have been reawaken to the reality of what the left has done to my country.”

Watch the video below:

Pete Hegseth, one of the biggest MAGA guys on Fox, says “this is the result of frustration that a lot of people feel. I frankly wasn’t surprised. I am not saying it is okay, I’m not saying all those things, but images didn’t shock me.” Listen to him channel the rioters… pic.twitter.com/7gciFGrGTq

“These are not conspiracy theorists motivated by lies. That’s a bunch of nonsense that people want to tell us,” Hegseth said. He continued to list a series of gripes with the “anti-American left” before once again sowing doubt over the election because of the voting processes that were adopted because of the coronavirus pandemic.

Steve Doocy pushed back somewhat by noting that Trump and his allies have been claiming for months that the election was corrupted, but failed to prove it while spouting off conspiracy theories. At the same time, however, he took a leaf out of Rudy Giuliani’s book by claiming “99 percent” of the mob was peaceful before rampaging through the Capitol and demanding the election be overturned.

Hegseth continued to rail against Trump’s sociopolitical enemies while arguing that what happened at the Capitol “doesn’t mean you need to condemn the entire thing.” When asked if Trump could try to make a comeback in 4 years, he said “of course he does” and “the movement he’s created is not over.”

Watch above, via Fox News.