After some nervous weeks last spring coping with the pandemic-induced economic shutdown, truckload (TL) carriers have rebounded with demand outpacing capacity in many cases. Now, even when shippers find suitable capacity, they’re finding it costs more to ship the same amount of freight.

“Market capacity is extremely tight,” says Greg Orr, president of CFI, the TL unit of Canada-based TFI International. CFI will push $2 billion in total revenue this year, thanks to a robust recovery from the spring economic shutdown throughout North America.

In the meantime, demand for TL services is likely to increase, says Wadewitz, thanks to a surge in U.S. factory orders in June. Overseas, China’s factory output this summer was its largest since 2011—and, eventually, a lot of those Chinese goods do land ashore as truckload freight.

Indeed, shippers who have solid contracts can thank their good planning. Tight capacity and surging demand have led to as much as a 30% increase in spot market rates. “Earlier this year, shippers were trying to take advantage of the market while they could,” says Orr. “That has now completely flipped. Rates are improving, and they’re improving quickly.”

Other carriers are seeing the identical situation. “The surprise is how strong demand has been the past eight weeks as the economy reopened,” says Derek Leathers, vice chairman, president and CEO of Werner Enterprises, the nation’s sixth-largest TL. “The demand we’ve seen is stronger than we expected.”

So, let’s take a closer look at the three trends currently driving this better than normal seasonal pattern for TL freight—diversification, drivers and how to plan for demand. And finally, we’ll disclose truckload carriers’ plans for rates heading into 2021.

Increasingly, successful TL carriers are finding that diversification is key as they work to even out the inevitable peaks and valleys of trucking. When carrier executives speak of diversification, they mean across various customers, products and industries to help smooth demand in this notoriously cyclical industry.

In general, most TL carriers tend to lose money in January, hope to break even in February, and then make whatever profit there is during March. That again happened this year—until the pandemic largely shut down the economy in late March,

This seasonality continued rebounded surprisingly well in the second and third quarters when agricultural and gardening products surged, automobile manufacturers geared up for the new model year, and then finally the back-to-school sales usually create a late-summer surge. The first couple months of the fourth quarter tend to be good, followed by a sharp drop off in demand immediately after Thanksgiving.

However, successful TL executives say that it’s not enough to smooth out demand throughout the calendar year—the secret is expanding customer bases, not just by balancing retail versus industrial demand, but individual companies within different sectors.

“Diversification is critical to running a successful logistics or trucking company,” says Leathers. “You have to diversify by geography, industries and across peak seasons. Obtaining multiple peaks and layering them inside your network is key.”

But there’s even a more important criteria shippers should know. Trucking companies want to align themselves with what Leathers calls “winning companies with winning strategies” across various industries. “Those companies tend to do well in good times and bad,” he says. “They tend to have successful management teams and profit models focused on growth and being best in class. That’s an ongoing focus for us.”

CFI’s Orr adds that diversification within sectors is important. While the overall auto industry slumped earlier this year due to the pandemic restrictions, he said the auto parts sector continued to do well as Americans put off buying new vehicles and decided to maintain their older ones with new parts. “The strategy is taking it a layer deeper, and that will allow you to survive if we have to go through this again,” he adds.

The decades-old driver shortage has not been made easier by the pandemic. If anything, trucking executives say, it has worsened the situation and made finding experienced, drug- and alcohol-free drivers even harder. Even before the pandemic, the American Trucking Associations (ATA) estimated the industry was short some 60,000 drivers—analysts and executives say it’s even worse now.

Experts and trucking executives contend that there are two reasons for this situation. First, COVID-19 caused a number of veteran drivers in their late 50s or early 60s to retire because of health concerns. Second, many driver training schools were forced to close or cease to do business because pandemic restrictions ordered them to cease in-person classes. Training classes using social distancing produced about 60% of pre-COVID graduates, experts said.

“Experienced drivers are even harder to come by now,” Orr explained. “And new entrants into the industry have been cut in half because schools haven’t been able to process people into the marketplace as quickly as in the past.”

Statistics back up that claim. There were 100,000 fewer Commercial Driver Licenses issued in July compared to July 2019. “That just tightens the driver supply that much more,” adds Leathers. That means more driver “churn” from one carrier to another and continued “poaching” of drivers from other fleets. For shippers, it translates into higher rates because carriers are continuing to raise driver pay.

In the old days, prior to trucking deregulation in 1980, carriers had the luxury of creating elaborate five-year business plans. That was because rates were predicated on Interstate Commerce Commission, innovation was stagnant, and everyone was content on making their 3% to 5% over costs.

Welcome to 2020. The pandemic restrictions limited operations in some cases, but caused demand for certain consumer products—Clorox wipes, food essentials and personal protective gear, among them—to soar. Those carefully crafted three-year plans tended to go in the wastebasket, executives admit.

“We’ve tried to focus on a timeframe that’s less than three years,” says CFI’s Orr. “But in years two and three…we’ve not been very good at reading the tea leaves.” That’s because trucking demand can change so quickly. The U.S. economy contracted in the eight weeks in March and April as severely as it did in the two-year Great Recession in 2007-2008.

“Our approach has been to really try to invest in people, technology and processes,” Orr adds. “That’s what we’re driving toward. If you stay focused on those three things, you have a good path forward. “But it makes it tough for both corporate leaders and employees. Communication is the key, and we try to over communicate on exactly what, where and why we’re doing things.”

Demand is rising, and the capacity constraints due to the driver shortage are real. And if these current trends stay the course, it almost certainly means that shippers will be seeing higher TL rates in 2021. 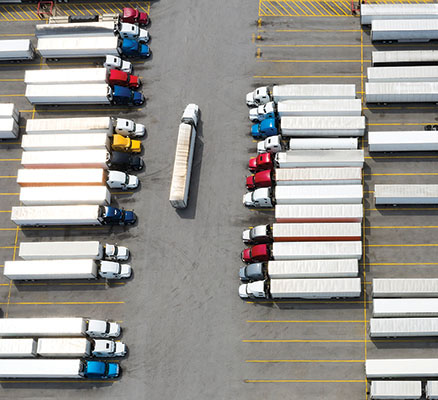 According Orr, through July CFI had secured almost as many contract bids as it did during 2019, which was a record year. Werner’s Leathers says that they’re “spot rates are up meaningfully, and our contract rates are quickly following.”

And by all indications, demand shows little signs of waning. The Census Bureau recently reported seasonally adjusted retailers’ inventory-to-sales ratio fell to a new low at 1.23x in June. This was down from 1.35x in May and 1.68x in April, when pandemic-related shutdowns halted large portions of the retail economy.

Such inventory replenishment is a key driver of truckload and intermodal demand, and low inventories point to strength in demand for the remainder of this year and likely into 2021.

Truck capacity is constrained as well. Class 8 sales are well below last year’s record levels, and appear only at replacement levels. Fleets are hesitant to expand because they say they can’t find enough drivers. And with demand up, experts and carrier executives say that means rates rising as well into 2021.

“Carriers can afford to be selective about acquiring new customers and are even restricting transactional business from 3PLs and freight brokers,” says Brian Thompson, who closely tracks the trucking industry as chief commercial officer at SMC3. “That indicates rates are rising.”

While spot TL rates have definitely jumped by double digits since demand began in earnest this summer, Thompson says that uncertainty about the future of the economy “will likely put on a ceiling on increases in contractual rates.”

Look for the driver shortage to get even worse.

Consider that the average age of a long-haul truck driver is currently around 59 years old, and early retirements have accelerated as concerns over their health have worsened.

Additionally, truck-driving schools, that were forced to close as the very start of the pandemic, have produced fewer and fewer newly trained drivers this year.

And as the pandemic concerns have spread into the fall along with fears that a “second wave” will arrive as the colder weather sets in, trucking executives say it’s becoming even harder to find safe, well-trained, regulatory-compliant truck drivers.

So, the pressure to raise driver pay is now enormous, as demographics, retirements and low pay hamper driver recruitment.

“The only solution that will work is raising compensation packages significantly,” says Michael Belzer, a professor at Wayne State and an expert in the truck driver dilemma. “This is a labor market problem, so individual carriers must recognize and meet the demands of the market. J.B. Hunt took this approach 25 years ago and it remains the only sure solution.”

Belzer says that carriers will need to raise pay rates to compete, but that’s not all. Carriers also need to provide compensation for non-driving time—and they need to minimize that down time. He adds that carriers should also renegotiate contracts with shippers to reflect these higher costs, while cargo owners will need to recognize that this is the only way to move their freight reliably.

“This really is simple supply-and-demand at work,” says Belzer. “The survivors will make the necessary adjustments to attract and retain the driver workforce they need.”

That means the hunt for experienced, compliant, safe drivers will become that much tougher and more expensive as we roll into 2021.