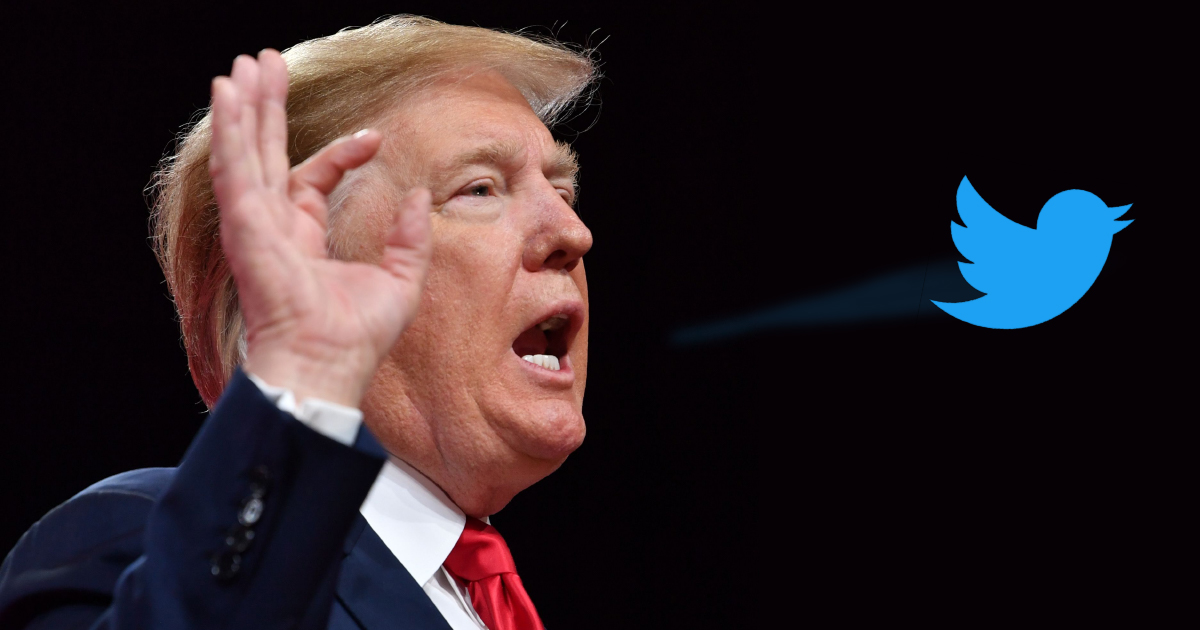 On Friday, January 8, 2021, President Donald Trump’s Twitter feed was permanently suspended. That marked the end of perhaps the most extraordinary posting run in the history of social media, in which a real estate developer turned reality T.V. star propelled himself to the White House on the power of 140 character brain dumps.

After losing the 2020 election, Trump certainly expected to be able to command his vast base from the very platform that fueled his ascent to the presidency. But then, in the wake of the bloody Capitol riot he incited, Jack Dorsey made the call: @RealDonaldTrump, and its more than 88 million followers, was banned.

How Trump will survive having his favorite megaphone unplugged remains to be seen (rallies and Fox & Friends appearances, no doubt, but also maybe a venture of his own). For now, it’s worth looking back at the tweets themselves, which ranged from the absurd to the consequential, particularly once Trump was elected the commander in chief of the United States.

Here is an incomplete collection of the weirdest Trump tweets of all time.

Robert Pattinson can do much better 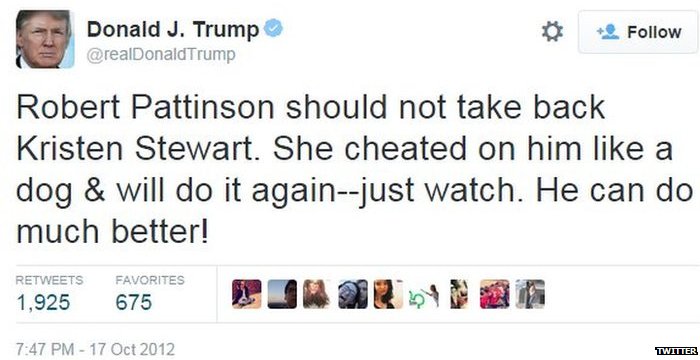 Trump tweeted about Robert Pattinson and Kristen Stewart’s relationship eight times, according to an archive of his tweets. In many of those posts, he insisted that Pattinson could do better than Stewart. 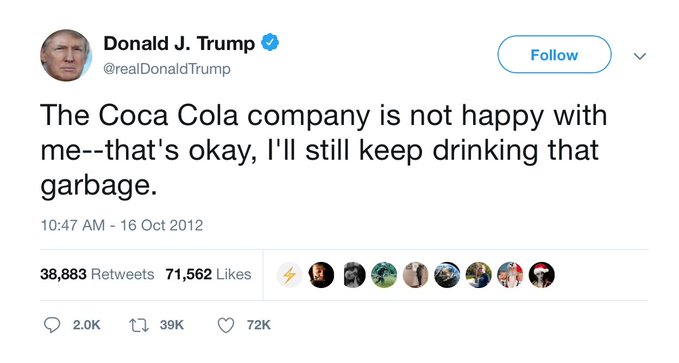 He did indeed “keep drinking that garbage.” Trump famously maintained a red button on the Resolute Desk in the Oval Office that summoned a Diet Coke when pressed. He reportedly drank 12 Diet Cokes a day, which is a large quantity of garbage.

I have a friend that wants to meet your sister 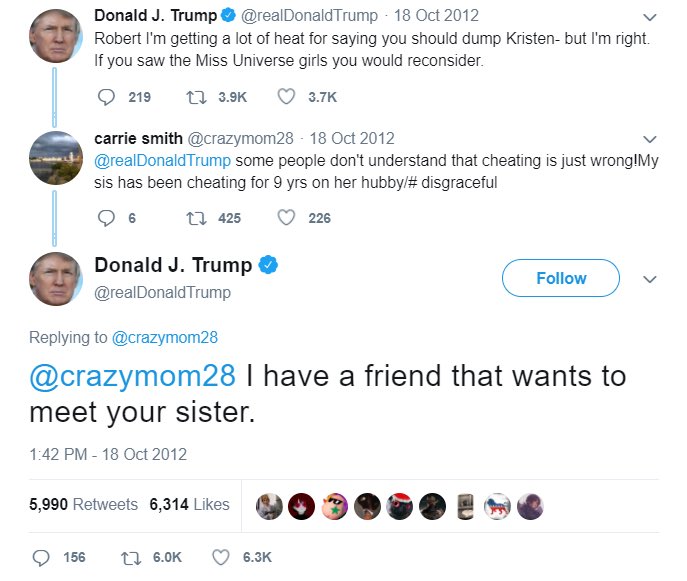 In this post, Trump informed Twitter user @crazymom28 that he had a friend to introduce to her sister, who had been cheating on her husband for nine years. 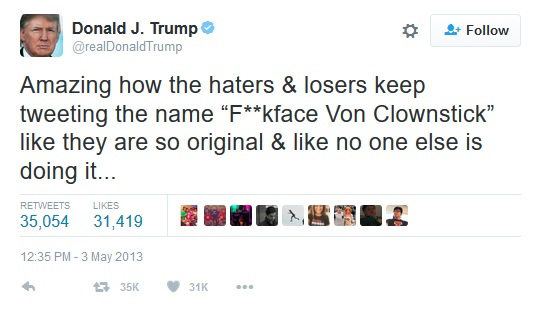 This one requires some context: Trump was going after Jon Stewart on Twitter in 2013. He was mocking Stewart’s real last name, Leibowitz, and stating that the Daily Show host should be “proud” of his heritage (yikes). Stewart replied by joking that Trump’s real name is “Fuckface Von Clownstick” and that Trump should embrace the “Von Clownstick” heritage. That prompted a lot of people to tweet that name at Trump, which then prompted the above tweet, addressed to all the haters and losers out there. 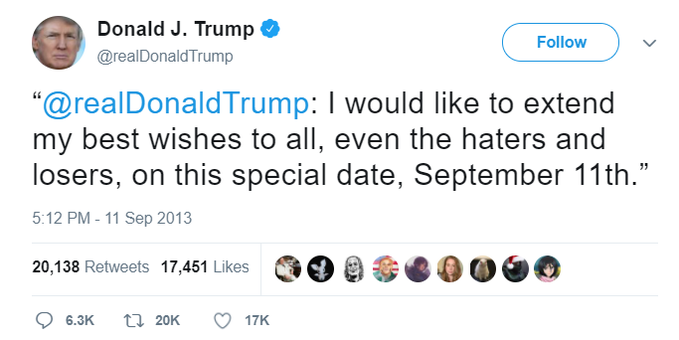 In this tweet, Trump extends his best wishes to “the haters and losers” on the somber date commemorating the 9/11 terror attacks.

Trump tweeted a staggering 30 times about Graydon Carter, the erstwhile editor of Vanity Fair, and gatekeeper to a tier of Manhattan society that never really accepted Trump. Before serving as editor of Vanity Fair, Carter tormented Trump in the pages of Spy magazine. Many of Trump’s tweets targeting Carter attacked the quality of food at his West Village restaurant, The Waverly Inn.

This tweet was issued as part of a clean-up job after Trump said that Hillary Clinton got “schlonged” by Barack Obama in the 2008 election.

Bleeding badly from a face-lift

Trump continued to feud with the hosts of Morning Joe well into his presidency. In one peculiar tweet that would become the subject of much discussion, he claimed friend-turned-foe Mika Brzezinski was “bleeding badly from a face-lift” upon their last visit to Mar-a-Lago.

My button is bigger 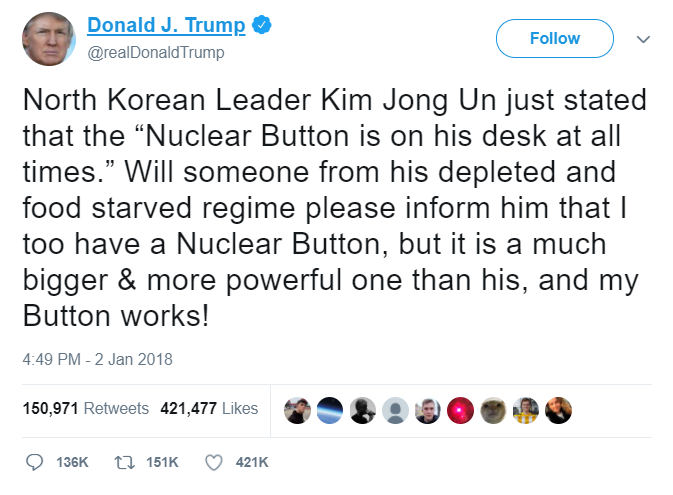 Trump had a hot and cold relationship with North Korean dictator Kim Jong Un. Sometimes, the U.S. president spoke giddily about the “love letters” he had received from Kim. In this particular instance, Trump threatened the dictator with nuclear warfare, boasting that his “Nuclear Button” is “much bigger & more powerful,” with the added bonus that it “works.” 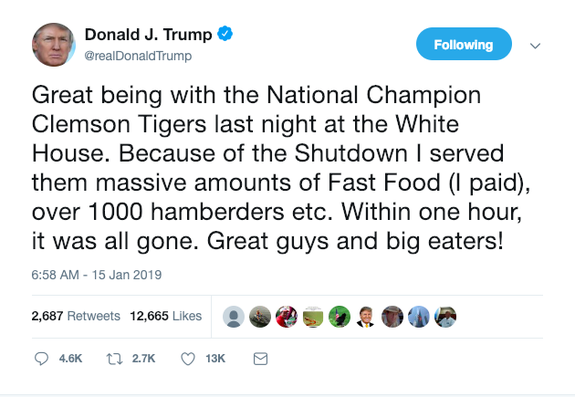 Remember that iconic photo of Trump, arms splayed, presiding over an enormous table of McDonald’s? This was what he tweeted about it.

I pride myself on my ability to write 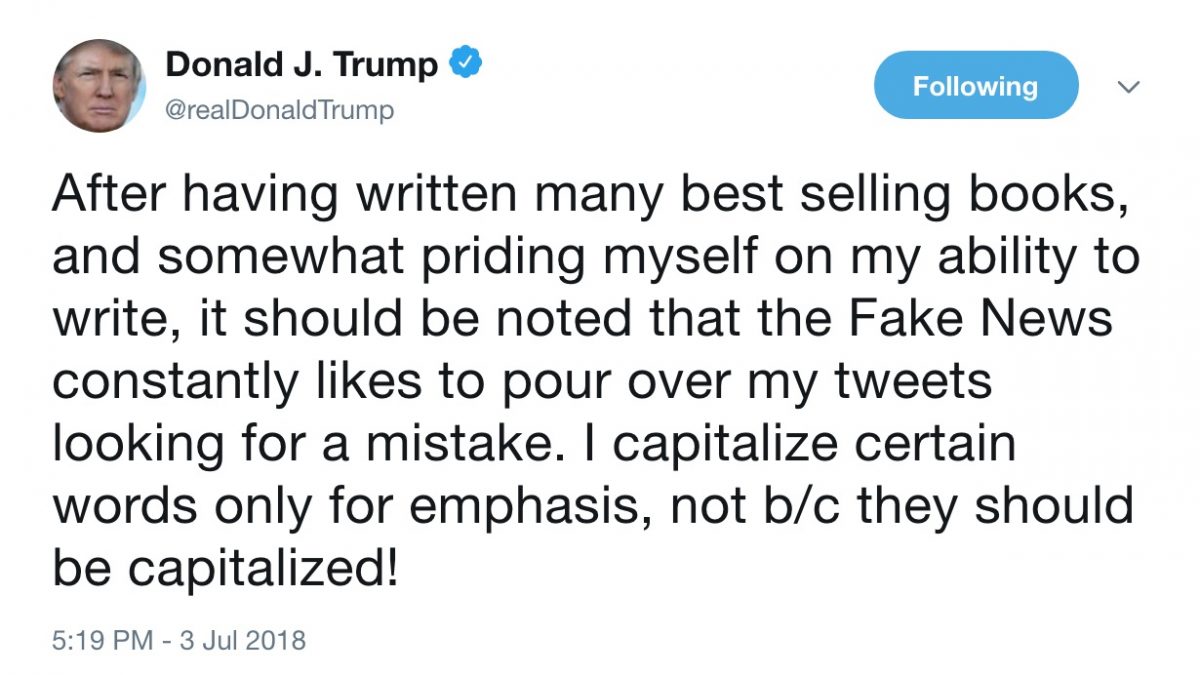 After endless speculation about the president’s peculiar syntax, Trump finally explained in a 2018 tweet why he capitalizes random words: emphasis. He added that he prides himself on his ability to write.