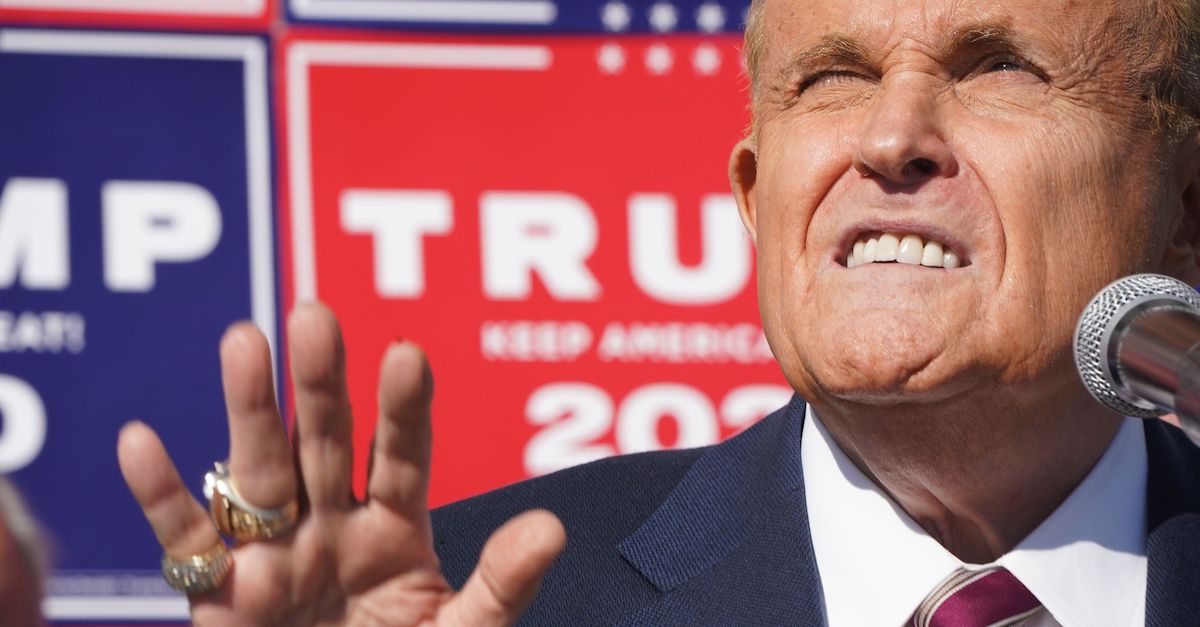 Rudy Giuliani’s debut performance for the Trump campaign in federal court on Tuesday afternoon looked like his freewheeling press conference at the Four Seasons Landscaping Company. He recapped the same baseless allegations of voter-fraud—only this time, in front of a judge in a riff that bore little resemblance to his lawsuit.

“They stole an election,” Giuliani claimed in the Middle District of Pennsylvania, in one of the many inflammatory remarks alleged in neither the 85-page original complaint nor the redlined amended version that struck broad swaths from the original suit.

The former mayor of New York City alleged that 1.5 million votes had been illegally counted, without explaining how he arrived at that number. He falsely claimed that Republican observers had not been allowed to watch the ballot-count, an assertion he soon undercut by asserting that they were kept too far away from the action. He submitted an exhibit that he described as someone wearing binoculars to observe the count.

Pressed on whether one of his exhibits was from Philadelphia County, Giuliani said: “I was told that.”

Giuliani promised to correct himself later if he learned that was not true.

Saving most of his venom for the majority-Black Philadelphia, Giuliani depicted the City of Brotherly Love as a hotbed of corruption and ground zero of the airy shenanigans that he alleged.

“This doesn’t happen in an honest place,” Giuliani fumed. “This is an outrage, your honor, to do this to people.”

Just what “this” is has little definition in the actual complaint, which alleges precisely two suspected instances of fraud in Fayette and Luzurne County. The Trump campaign did not sue either of those counties (which voted overwhelmingly for him), opting instead to attack seven Democratic counties.

“Counsel on the side of the aisle focused on allegations that aren’t in the complaint,” Donovan said.

Splashing cold water on the wild allegations of voter fraud, Donovan added: “There is no claim in the complaint that any Pennsylvania voter cast more than one ballot.”

“This is not a fraud case,” the Trump campaign’s lawyer Kory Langhofer told a Maricopa County judge last week.

The campaign’s other lawyers said the same before state judges in Montgomery and Philadelphia Counties.

The federal Pennsylvania lawsuit argues that different practices across the Keystone State’s various counties amount to an equal-protection violation. Some counties gave mail-in voters the opportunity to cure defective ballots, and others did not.

That would have required the two Pennsylvanian voters joining the Trump campaign in the lawsuit to have sued their home counties Fayette and Lancaster County, which did not happen.

Both of those counties voted double-digits for Trump.

Mark Aronchick, counsel for the Allegheny County Board of Elections, also pilloried the former mayor’s opening.

“Mr. Giuliani is talking about another case,” Aronchick said. “Not the case before your honor.”