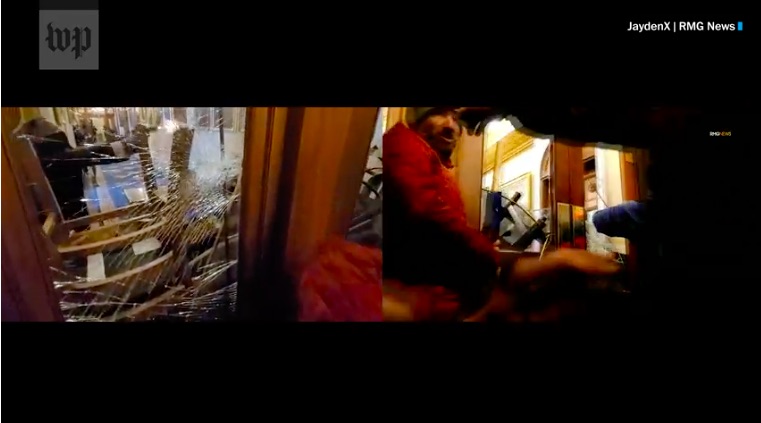 Shocking videos captured the final moments leading up to the Capitol Police shooting of Ashli Babbitt, as a she and a mob of fellow pro-Trump rioters began to breach a set of doors leading to the Speaker’s Lobby in the House chamber.

One segment, taken by a left-wing documentarian Jayden X, was part of a much longer video, where he followed the MAGA insurrectionists inside. The mob was eventually stopped at a set of double doors right outside the House chamber, which leads down to the Speaker’s Lobby, where Nancy Pelosi’s offices are located.

Three police officers stood outside the doors guarding it, but were vastly outnumbered and threatened by the rioters. At times, the rioters literally punched at the door’s glass just inches away from their heads. After a tense standoff, someone in the crowd negotiates a path for the officers to exit and the mob’s fury quickly refocuses on breaching the doors.

“Let’s fucking go!” someone yells and two rioters step forward and proceed to smash the shatter-proof windows with a baton and helmet, attempting to tear the windows from their frames. Just seconds before one of the windows is pulled away, the hands of a police officer holding a pistol appear in the left side of the frame, visible on the other side of the doors through the glass. As people start frantically warning “There’s a gun! There’s a gun!” Babbitt begins to climb through the opened hole in the door, at which point the officer advances slightly and fires one round point blank at her. The mob immediately recoils and she drops back to the floor and quickly begins to bleed out of her mouth. Just seconds later, tactical police armed with assault-style rifles arrive on the scene from the staircase behind the rioters and regain control, pushing the stunned mob back.

Warning: this graphic video is not edited to obscure the shooting victim.

the clip is from this much longer YouTube account of the entire mob, riot of the Capitol.https://t.co/RjENzRn2wb pic.twitter.com/XzOkcCUgls

The Washington Post also composed its own package of the incident, combining two different videos — one from Jayden X and one from RMG News — and highlighting the key figures, including Babbitt as the assault on the door transpired.

In the Post’s compilation, it shows that just moments before the mob begin its attempt to breach the doors, Members of Congress could be seen gathering in the hallway just behind the doors. One Congressman, Rep. James McGovern (MA), can be seen looking down the hallway. At the moment of the shooting, the Post switches to a split-screen to show both videos.