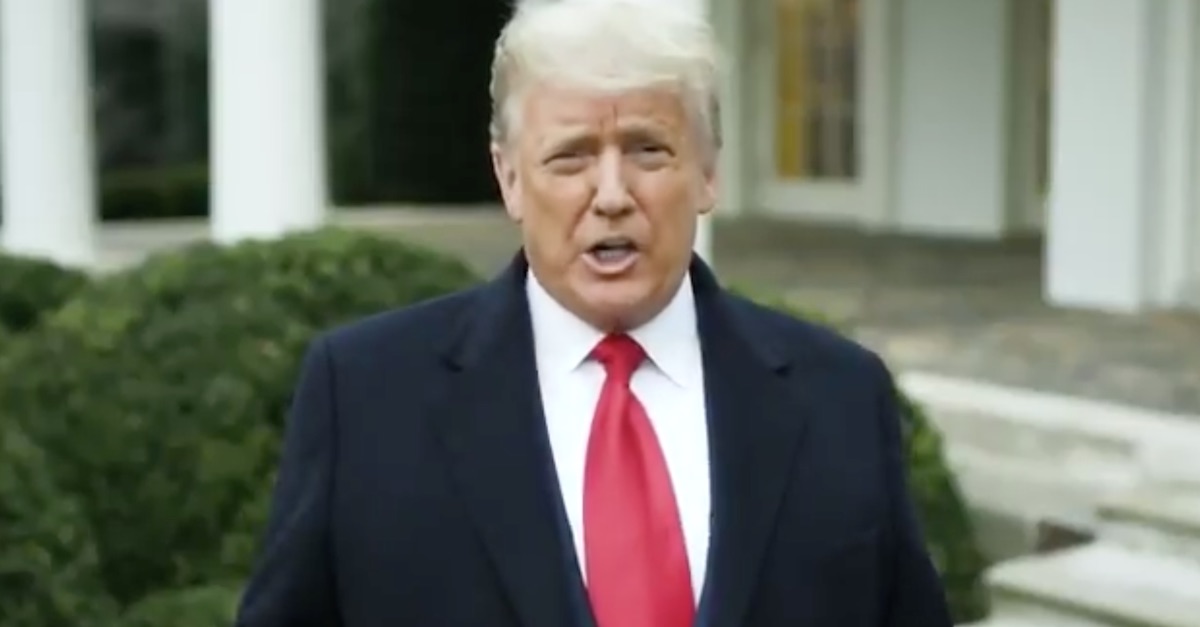 A new report from the Washington Post details President Donald Trump’s failure to react right away to the horrific mob violence that broke out at the U.S. Capitol Building last week.

The president of the United States’ first tweet as the Capitol was being evacuated last Wednesday was to attack his own vice president Mike Pence for not doing more to save his presidency during the electoral college tally. (Something that, once again, Pence could not actually do.)

His subsequent tweets didn’t exactly help things much, especially the video he put out to tell people to go home in peace — a video that contained his usual lie about the election being stolen, as well as him saying of the people storming the Capitol, “We love you. You’re very special.”

According to the Post, the president wasn’t exactly that responsive at first:

But as senators and House members trapped inside the U.S. Capitol on Wednesday begged for immediate help during the siege, they struggled to get through to the president, who — safely ensconced in the West Wing — was too busy watching fiery TV images of the crisis unfolding around them to act or even bother to hear their pleas.

“He was hard to reach, and you know why? Because it was live TV,” said one close Trump adviser. “If it’s TiVo, he just hits pause and takes the calls. If it’s live TV, he watches it, and he was just watching it all unfold.”

Even as he did so, Trump did not move to act.

The report matches other reporting that the president was pleased watching the mob at first, with the Post saying he “was busy enjoying the spectacle” and was “buoyed to see that his supporters were fighting so hard on his behalf.”

The Post’s account even includes these absolutely staggering details:

Shortly after 2:30 p.m., the group finally persuaded Trump to send a tweet: “Please support our Capitol Police and Law Enforcement,” he wrote. “They are truly on the side of our Country. Stay peaceful!”

But the Twitter missive was insufficient, and the president had not wanted to include the final instruction to “stay peaceful,” according to one person familiar with the discussions.

At one point, Trump worried that the unruly group was frightening GOP lawmakers from doing his bidding and objecting to the election results, an official said.

His calls for healing and reconciliation were more than a day too late, many aides said. Yet as Trump watched the media coverage of his video, he grew angry.

The president said he wished he hadn’t done it, a senior White House official said, because he feared that the calming words made him look weak.

Democrats are pushing for the president to be impeached again, and a smattering of Republicans have indicated they’re supportive of this idea.