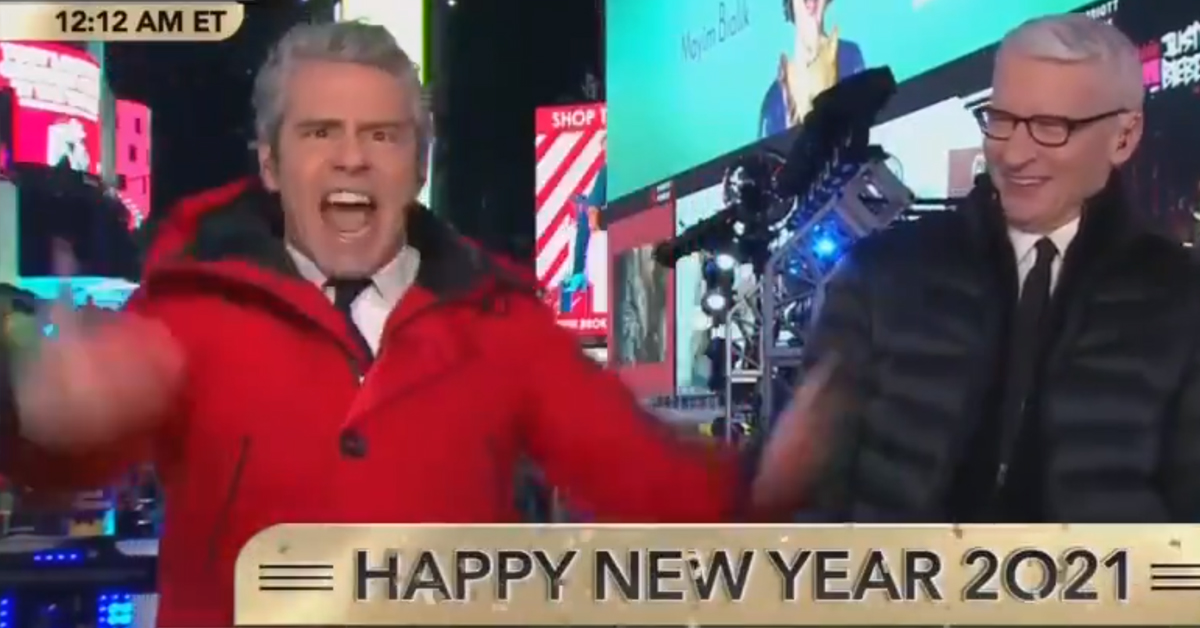 “2021 lookin up” seems to be the general verdict on CNN ending the old year and ringing in the new one with, among a slew of clippable moments, co-host Andy Cohen suddenly launching into a short, spontaneous burst of hot fire directed at Mayor Bill de Blasio.

Social media was chock-full of clips featuring Cohen and Anderson Cooper putting on their own unique show. The two drank it up, and Andy Cohen was especially on, even managing to upstage Snoop Dogg, as perpetually surprised Anderson Cooper, the perfect straight man, utterly lost it.

One of the best and most unexpected riffs was the sudden flash of righteous anger from Cohen directed at the New York City mayor, and the reactions came from all over, including political conservatives, New York residents, journalists and everday folks. A real coming together of hating de Blasio (and what his mismanagement during Covid represents) to kick off 2021.

The clip was as instant hit. The words “hero” and “icon” popped dozens of times for Cohen in Twitter searches. And it got big reactions with a lot retweet action from all sorts.

From news watchers, writers, and hosts…

Andy Cohen Torches de Blasio: “That’s how I felt when I saw mayor #deBlasio dancing, just now. I just don’t need to see that at the beginning of 2021. Do something with this city! Honestly, get it together!” ⁦@EveningEdit⁩ https://t.co/1LAUTXhGNi

Andy Cohen screaming at de Blasio to do something to help New York City is an unexpectedly wonderful way to spend the first few minutes of 2021. #CNNNYE

Drunk Andy Cohen going off on Bill de Blasio to kick off 2021 with Anderson Cooper pic.twitter.com/cecbOeWpOq

A mini-rant from @andy on Bill de Blasio dancing at midnight — “do something with this CITY!” — to kick off your 2021: pic.twitter.com/XpA9zR7oEm

To frustrated (and amused) New Yorkers…

Oh my god I cackled, coops holding him back

LOL Andy Cohen was channeling the frustrations of every single New Yorker this year. GET IT TOGETHER MAYOR DEBLASIO! pic.twitter.com/g3ZUjW4MJo

… To a little bit of everyone else, too.

If only we all wouldn’t be fired for speaking the truth. Bravo @Andy pic.twitter.com/ncaqtyEQFz

I will just always enjoy someone shitting on Bill de Blasio, I don’t care the reason. https://t.co/aFhNxp3BBR

By the way, here’s de Blasio dancing with his wife, in a nearly empty Times Square, enjoying the echoing emptiness of the city as its residents, his royal subjects, watch from behind locked doors.

Happy #NewYear from the greatest city in the world. pic.twitter.com/47CmOAanxD