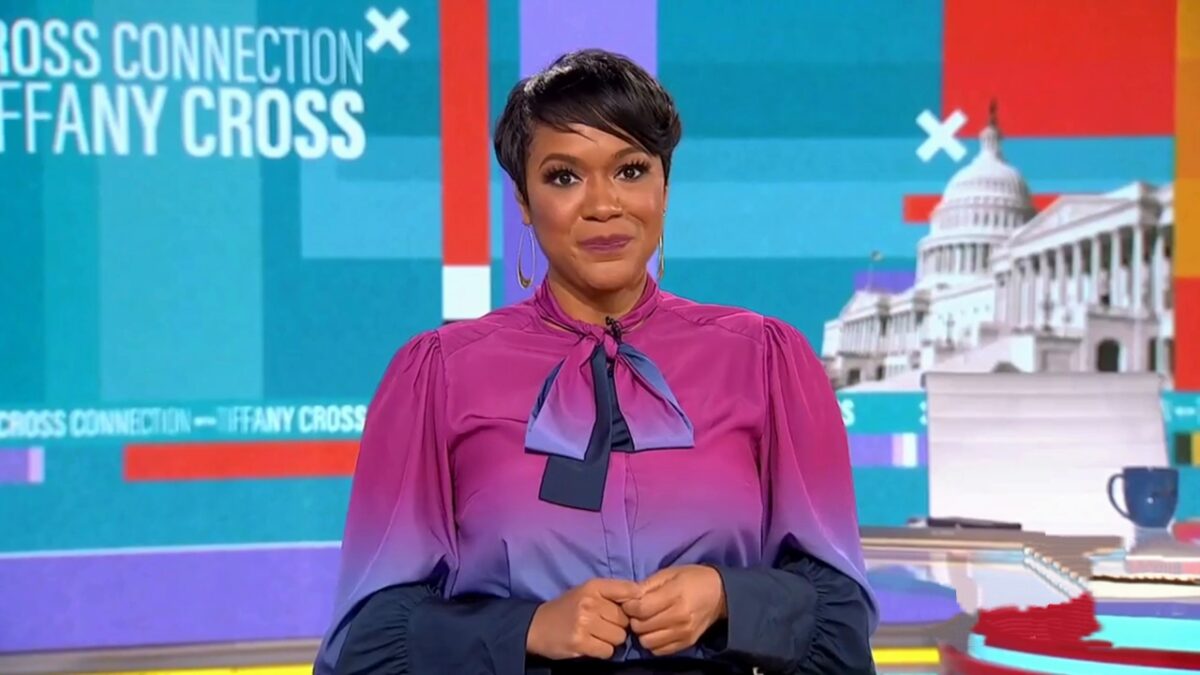 Tiffany Cross is a political analyst and author. And now, she’s the host of her very own new MSNBC show.

The Cross Connection, a two hour program airing Saturdays at 10 a.m., premieres today. I called up Cross on Friday afternoon — for this week’s episode of The Interview — to talk about her program, which is launching at a tumultuous time in American politics and culture.

First off, the president of the United States is refusing to concede an election he lost by seven million votes. Then, there’s the Covid-19 pandemic, which the CDC director says will be responsible for a 9/11s-worth of deaths every day for the next two to three months. The end of 2020 also caps off a year marked by one of the most powerful racial justice movements in recent memory, an upheaval sparked by the caught-on-excruciating-video killing of George Floyd — and others Black Americans — at the hands of the police.

The Cross Connection is launching against that backdrop. Its host is a cable news connoisseur, having worked at CNN and, after a stint as Washington D.C. bureau chief for BET Networks, as a political analyst for MSNBC. She is the author of Say It Louder! Black Voters, White Narratives & Saving Our Democracy, and served in 2020 as a resident fellow at the Harvard Kennedy School’s Institute of Politics.

We spoke about the awkward transition of power between the Biden and Trump administrations. I asked Cross what she made of Trump’s record with regard to Black Americans (not good) and whether she thinks a Biden administration is well-equipped to address racial inequality.

Cross said she is “optimistic” about the next administration but will apply the “same scrutiny” to the Biden White House that she did to his predecessor.

Cross was also optimistic that the reckoning over racial inequality in America was not fleeting, but rather will make for permanent changes, both in the media industry and beyond.

“Black people have always had to die in spectacular fashion to pierce the white narrative of what happens to us,” she noted.

Cross had been guest-hosting MSNBC weekend show AM Joy for some time. That show, which aired on Saturday and Sunday, was previously hosted by Joy Reid until she was promoted to host The ReidOut, which airs in the highly coveted time-slot vacated by Chris Matthews: weekdays at 7 p.m.

Reid’s promotion to prime time was one of the first programming moves carried out by Cesar Conde, the chairman of the NBC’s news networks. The selection of Tiffany Cross to replace Reid on Saturday (Washington Post columnist Jonathan Capehart replaces her in the Sunday slot) comes amidst another shakeup at 30 Rock: Rashida Jones was just named the president of MSNBC, replacing network veteran Phil Griffin.

Cross recalled the first time she met Jones, in the executive’s corner office at 30 Rock.

“Even though we did not know each other well, I knew her and she knew me,” Cross said of Jones. “She understood my lived experience. And I have never in all of my years in journalism sat across from someone that was my age, had my experience, and I didn’t have to mute who I was, shrink who I was. I could just be me and have that person get it.”

The MSNBC host described that encounter as a “turning point in my career.”

Cross hailed MSNBC for its efforts to reach communities of color through putting a diverse set of voices on air — a priority of Cesar Conde.

“There are still some networks out there who are treating race as a vertical,” she said. “It’s like, oh, we’ll have a race beat. One of the great things that catapults MSNBC lightyears ahead of competition is they understand that communities of color are not the side dish.”

“If you build it, they will come. And I think MSNBC is building it,” she added. “It’s one thing to cover protests in the street and thrive on if they’re violent. What if we treated systemic racism like breaking news? What if we address things from a perspective of the rising majority of the country? And I think that’s what’s happening at MSNBC. And that’s certainly what I plan to be doing.”

Cross also noted that she used to appear on Fox News, but stopped after she was surprised by topics she had not been told were up for discussion.

“I just felt like that trickery was beneath me and I wasn’t reaching people who had any level of intellectual curiosity about hearing another side,” Cross said. “Every time I would get flooded with the most ridiculous, hateful, racist, xenophobic messages and I’m like, you know, this isn’t really a good use of my time. So I stopped doing it.”

As for the cable news personalities Cross admires: Joy Reid is top of the pile. Rachel Maddow, Yamiche Alcindor, Abby Phillip and John Berman also got shoutouts. Listen to the entire conversation on this week’s episode of The Interview, and catch The Cross Connection on MSNBC Saturdays from 10 a.m. to noon.