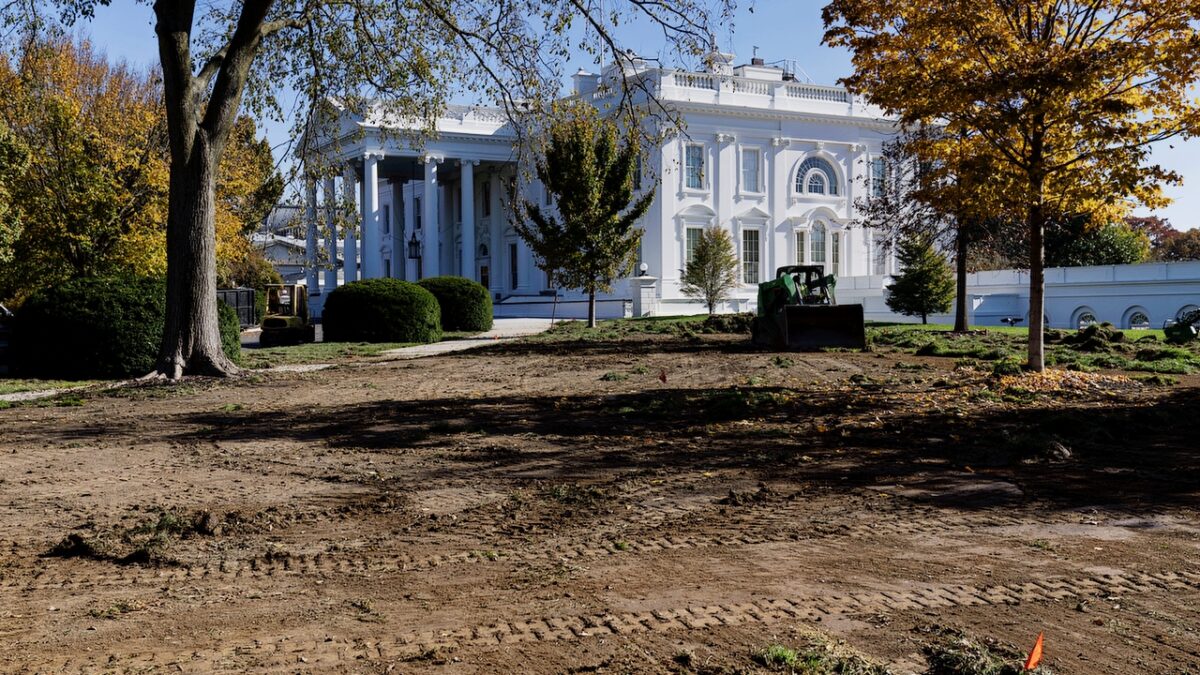 Speculation abounds as the North Lawn of the White House was extensively dug up days after President Donald Trump lost his reelection bid, and President-elect Joe Biden was declared the winner by most major news organizations.

That event was, itself, characterized by a lawn maintenance theme, as Trump lawyer Rudy Giuliani had the news of the loss broken to him as he held a press conference in the parking lot of Philadelphia’s Four Seasons Total Landscaping. Trump himself was surrounded by lush grass when the news broke while he was golfing at his Sterling, Virginia resort.

And on Monday, CNN’s Betsy Klein got DC tongues wagging when she posted photos of the North Lawn’s transformation into the North Dirt Patch:

Sometime between 5:30 am and now the White House North Lawn was dug up pic.twitter.com/3zEtPb3wkV

Some just wanted to know what was going on, while others had theories — and jokes.

What is happening at the White House?!? After tearing up the lawn, is he going to peel off the wallpaper and run away with the silverware? pic.twitter.com/ZO7VtvR8nr

Fairly certain the outgoing huckster is taking up the White House lawn to sell one-inch squares on his web site to raise money. pic.twitter.com/UbAftDMIpV

They’re tearing up the entire White House lawn just so they can pretend they had a real reason for being at a Landscaping office. https://t.co/cQ3Oz1hLpZ

If only there was a landscaping company that worked all year round– during EVERY season. https://t.co/OaC2adAWj1

Maralago is gonna magically get some new “turf” https://t.co/RF8KetlQ5S

Is this where they are installing the trebuchets https://t.co/WL24K8ddMB

The Defense Secretary was just fired for REFUSING to let Trump use the military for his own personal gain, Trump’s Atty. General finally popped up again, and the White House is tearing up its lawn.

I’m getting a growing sense of unease that these three things are connected.

The weirdest part is that it was done by bellhops from the Four Seasons https://t.co/Ha8MDP2j9S

Newsweek’s Leda Reynolds reached out to the White House for an explanation, but didn’t get an answer.

However, there’s every chance that the work has something to do with preparations for President-elect Biden’s inauguration, which are already underway, as The Daily Mail’s Nikki Schwab suggested might be the case.

Not sure about the North Lawn.

As amusing as the timing may be, there’s really nothing unusual about extensive lawn work at the White House.