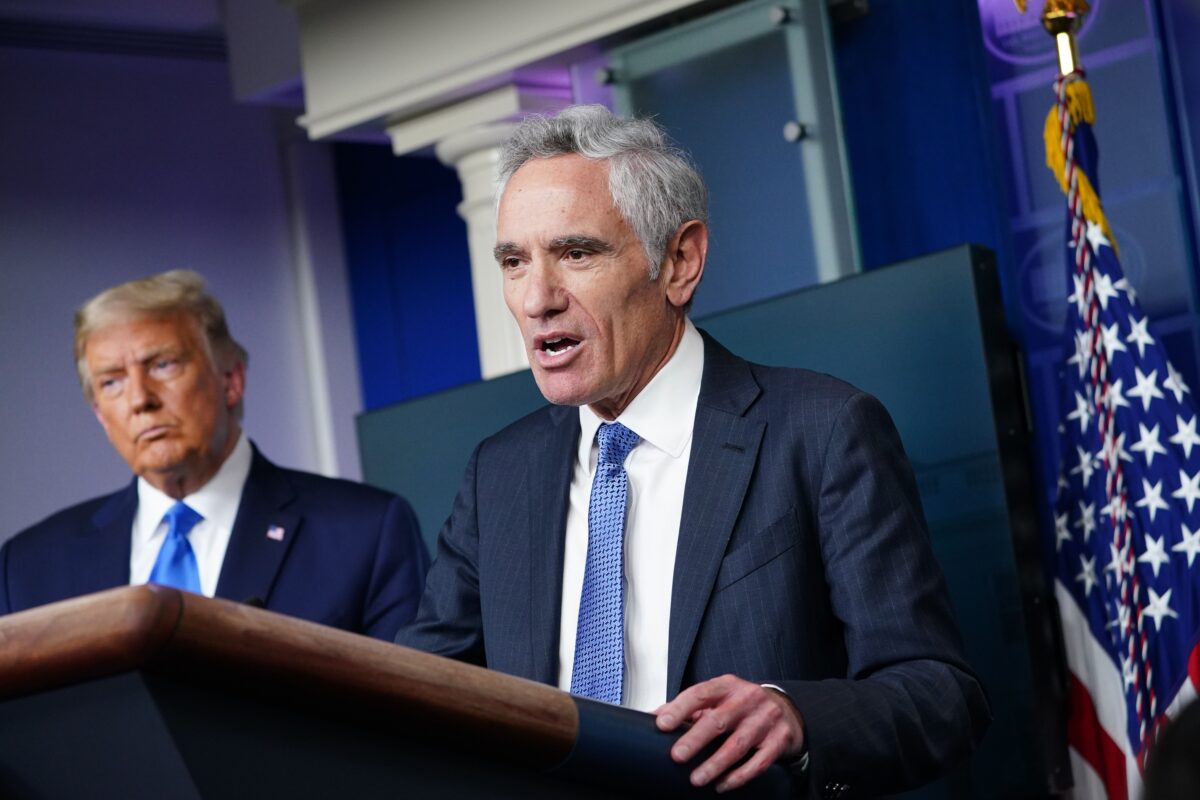 Atlas’ original tweet came in response to one that Huffington Post reporter Philip Lewis posted about new restrictions that Whitmer was enacting as Covid-19 cases have spiked alarmingly, in her state and across the country.

On  Sunday, the U.S. surpassed 11 million coronavirus cases, with hospitalizations also at an all-time high. Nearly a quarter of a million Americans have died from the virus.

“The only way this stops is if people rise up,” Atlas tweeted on Sunday. “You get what you accept. #FreedomMatters #StepUp.”

The only way this stops is if people rise up. You get what you accept. #FreedomMatters #StepUp https://t.co/8QKBszgKTM

Atlas has been sharply criticized for some of his comments about how to respond to the pandemic — including claiming masks don’t work and pushing a “herd immunity” approach that an actual infectious disease expert called a “most amazing combination of pixie dust and pseudoscience.” He has frequently been at odds with other members of the White House coronavirus task force, like Dr. Anthony Fauci and Dr. Deborah Birx. Nonetheless, because Atlas’ views more closely align with the president’s, he has remained a close adviser to the president.

Reaction to Atlas’ tweet was swift, loud, and highly critical, with many calling it irresponsible to encourage people to “rise up” against a governor who was recently the target of a plot to kidnap and murder her.

What the hell is wrong with you? People are dying you stupid son-of-a-bitch. Is it worth it just so you can be up Trump’s ass?

Is… is a White House official advocating ppl rise up against a governor, and against one who was almost kidnapped by armed militiamen for exactly this reason? https://t.co/ARpGvGzqFc

This is despicable. You must know that.

A few hours later, Atlas posted a tweet that he said was intended to “clarify the obvious,” arguing that pandemic policy in the U.S. was “federally supported” and then “state managed” and “locally implemented.”

The tweet seemed to be inadequate to quiet his critics.

Just to clarify the obvious.
In a little more than two months you will:
No longer have any power over the federal government’s pandemic response.
Will slink back to the crank “think tank” known as @HooverInst.
Predictably end up a pundit at @FoxNews.
Good. And Good riddance.

Then, finally, a little less than an hour later, Atlas tried to explain himself on Twitter again.

“Hey,” he tweeted. “I NEVER was talking at all about violence. People vote, people peacefully protest. NEVER would I endorse or incite violence. NEVER!!

Hey. I NEVER was talking at all about violence. People vote, people peacefully protest. NEVER would I endorse or incite violence. NEVER!! https://t.co/LljvwMvjDV

Many Twitter users remained skeptical, noting Atlas’ claim that he was talking about people voting rang false when we literally just had an election, and others noted a similarity with Trump’s “stand back and stand by” comments about the Proud Boys.

I don’t believe this for a minute. Also why don’t you delete the tweet and apologize and then also tell the president to take the virus seriously

You were urging people in Michigan to vote … in the next elections, two years from now?

Sure, that definitely checks out.