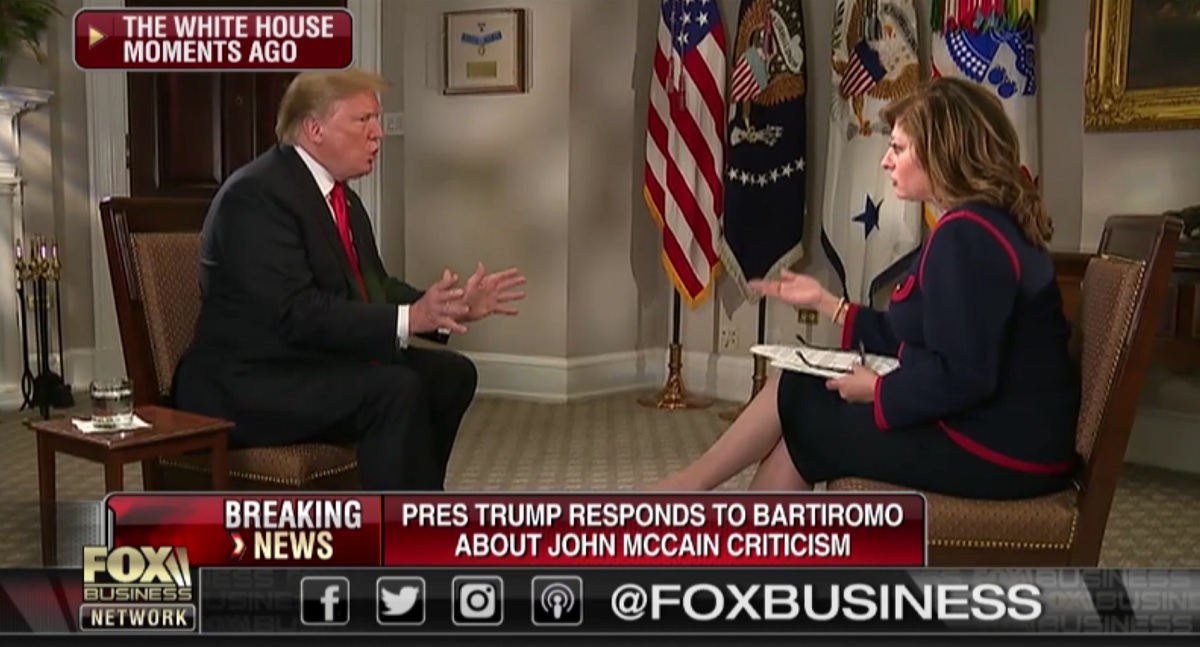 President Donald Trump defended Fox News anchor Maria Bartiromo on Christmas Eve, amid a barrage of false, angry tweets railing against the results of the 2020 election.

Trump is celebrating Christmas at Mar-a-Lago in Florida while Washington remains in turmoil between his veto of the National Defense Authorization Act, the uncertainty over attempts by Congress to pass Covid relief, and the possibility of a government shutdown.

Between rage-tweets about Republicans not offering him enough support for his attempts to overturn the election, Trump had some glowing things to say about Bartiromo.

“Maria’s show and ratings are better than ever,” he said, in response to a tweet defending Bartiromo against a “hit piece.”

“They are trying to shame her into not telling the truth,” Trump added. “Her audience would be gone, and she is far too smart for that. Rigged Election!”

Maria’s show and ratings are better than ever. They are trying to shame her into not telling the truth. Her audience would be gone, and she is far too smart for that. Rigged Election! https://t.co/g3AyaOx3dv

It’s not exactly clear which “hit piece” prompted the tweet from Tim Young and the subsequent retweet from the president. It could have been two separate pieces — one from the Washington Post and another from the Los Angeles Times — both of which were published on Wednesday, and asked how Bartiromo devolved from a prominent journalist to a loyal Trump-booster.

In any case, it is notable that Trump claimed Bartiromo’s critics are “trying to shame her into not telling the truth” — given she was just forced to air a fact-check of baseless conspiracy theories aired on her own show after a legal threat from voting systems company Smartmatic.

Since the election, Bartiromo has provided a platform for baseless claims that the 2020 contest was stolen by mass voter fraud. Many of these conspiracy theories revolve around the companies that provided voting machines during the election, including Dominion and Smartmatic. Both companies have threatened Fox News and other pro-Trump outlets with legal action.