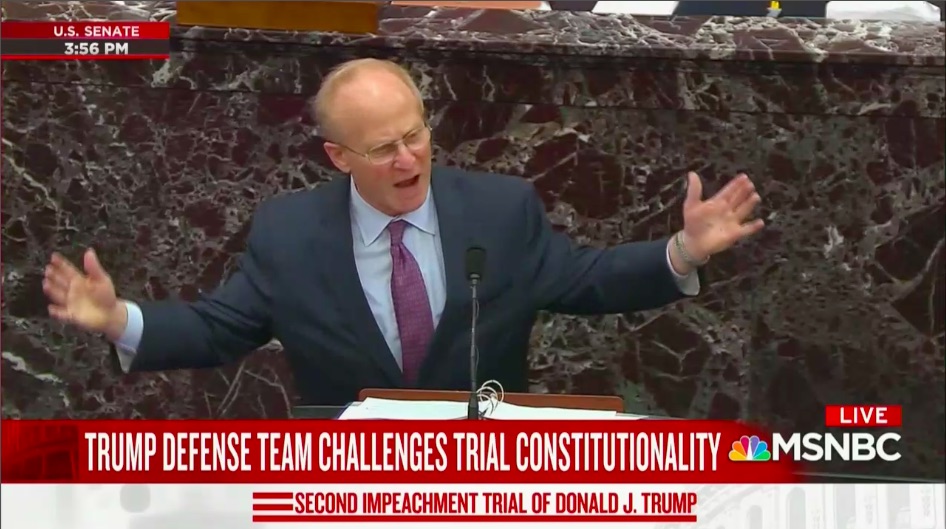 The Trump impeachment defense counsel’s second presentation, by attorney David Schoen, cut a strikingly different and angry tone on Tuesday afternoon. And the reactions online were correspondingly outraged by his vitriol aimed at the House Impeachment Managers and Schoen’s not-so-subtle implication the Senate trial could lead to a second civil war.

Schoen’s heated and aggressive argument, from the outset, contrasted with his co-counsel Bruce Castor’s wandering and often-befuddling opening statement. It didn’t take long for observers to point out Schoen’s ugly, implied threat to the Senate, his contradictory claim that the second Trump impeachment was both rushed and too slow, and his hypocritical attack on the House Democrats for using a “movie”-like video as evidence — just minutes before doing the same himself.

Did Schoen just threaten that there could be a second civil war if Trump is convicted?

“They want to put you through a 16 hour presentation, over two days, focusing on this as if it were some side of blood sport … this is a process fueled irresponsibly by base hatred” — David Schoen is angry pic.twitter.com/ZfGps6bIUz

The Schoen speech is truly despicable.

And Schoen’s like “Nah, bruh. Hold my beer. I’m gonna threaten civil war if they go through with this.” https://t.co/VCw2x79xqX

Trump lawyer David Schoen seems to argue there could be another civil war if Trump is convicted?

“This trial will tear this country apart, perhaps like we have only seen once before in our history.”

Trump lawyer Schoen is now telling senators this process is too early — wait for “more evidence” and further investigation — while also arguing the opposite, that this trial is “too late” to be constitutional because Trump left office.

How dare the House managers show edited footage of the attack on the Capitol, Schoen bellows before showing, as a defense exhibit, a movie with a score.

Where Bruce Castor went with “amiable dunce,” David Schoen seems to be going for “dumb asshole.”

I thought Castor was bad, but with Schoen we’ve entered the depths of stupid.

Mitch McConnell refused to recall the Senate until the day before the inauguration and now Schoen has the chutzpah to say that the delay strips the Senate’s jurisdiction.

Just before he stood up on the Senate floor, Schoen was heard to say, “And you think Castor was bad?”