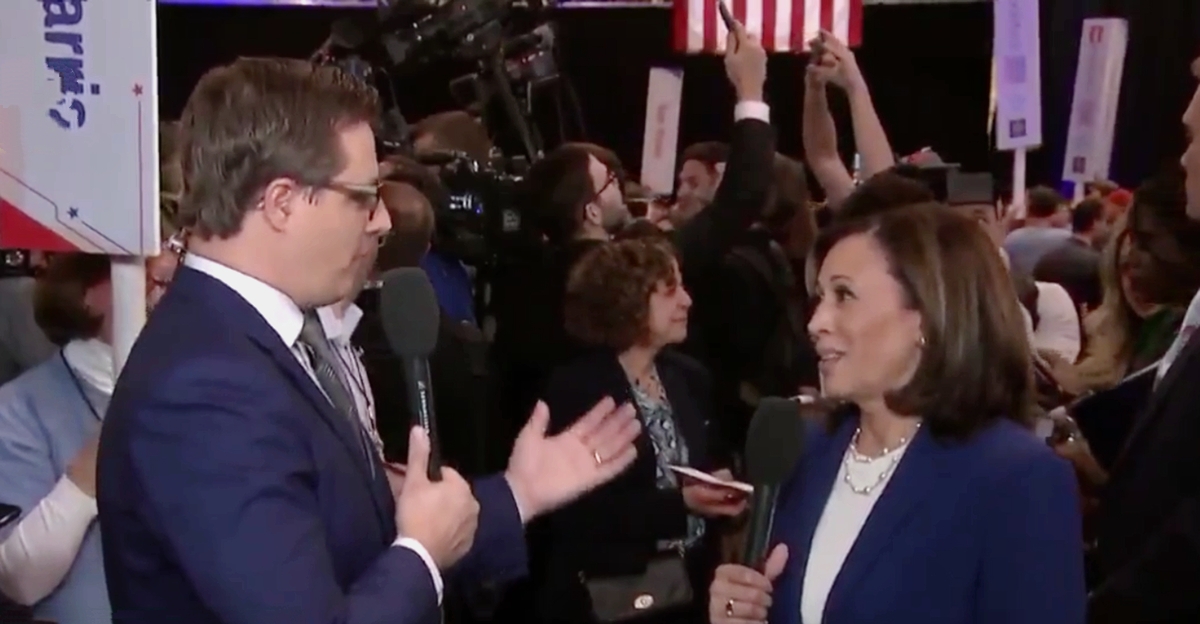 Vice President-elect Kamala Harris was widely mocked and literally laughed at when she demanded Twitter suspend President Donald Trump over a year ago — but the carnage at the Capitol is the latest evidence it was no laughing matter.

On Friday, Twitter announced it was banning Trump permanently, then spent their evening suspending other accounts that a desperate Trump tried to use instead, and apart from the rabidly pro-Trump among the media, there was general agreement that in light of recent events, the step was a prudent one.

But that wasn’t the case a year and a half ago when, after Trump had already incited acts of violence that included multiple pipe bombings and mass shootings, then-Senator Kamala Harris began pushing in earnest to have him banned from the platform. Although she’s been vindicated now, here are just a few of the people who should have listened then instead of chuckling.

On September 30 of 2019, Harris told CNN’s Anderson Cooper that Trump should be banned from Twitter, telling him, among other things, that “What we want to make sure is that his words do not actually result in harm to anyone.”

The senator followed that up with a letter to Twitter CEO Jack Dorsey in which she asked for Trump’s suspension, writing “When this kind of abuse is being spewed from the most powerful office in the United States, the stakes are too high to do nothing.”

Twitter’s reply was a lengthy “Nope.”

That same day, Massachusetts Senator Elizabeth Warren was asked “Should Donald Trump be banned from Twitter?”, and dismissed the idea with a terse “No!” and a derisive laugh.

But the issue really exploded two weeks later when Sen. Harris tried to persuade Warren, during a nationally televised debate, to change her mind and was met with the same terse “No” and a subject change to reining in “big tech.”

Following the debate, MSNBC host Chris Hayes asked Harris about the exchange, but did so by saying “Why does that matter? Of all the things, why that?”

Among other things, the future VP told him to “Ask the whistleblower. Ask members of the United States Congress. Ask the people who are prepared to testify about this president’s lawlessness and obstruction of justice,” and most importantly, “Ask the people and the families in El Paso when that shooter admitted in his manifesto that he was influenced by Donald Trump’s tweets.”

Senator Harris reiterated her prescient position to others following the debate.

Kamala Harris on challenging Elizabeth Warren over shutting down President Trump’s Twitter account: “We have to take seriously the implications that are about the threatening witnesses, intimidating witnesses and obstructing justice” pic.twitter.com/JSFEG9bG30

The exchange also fueled a lot of Twitter mockery from people who are likely not similarly trashing Twitter’s current decision.

Harris seems to believe she is running for Social Media Moderator in Chief.

I’m with @ewarren—kicking Trump off Twitter doesn’t make sense. It’s a silly gimmick. But I’m appalled that Warren thinks that the tech industry—the crown jewel of the US economy—is so evil that she won’t take contributions from its executives. #DemDebate4

i think by now most people see the Harris “delete Trump’s twitter” call as a gimmick at best. weird point to push Warren on

I don’t see why Kamala thinks this helps her. Warren just shrugged it off and went into her spiel about breaking up tech companies. https://t.co/LosnAzFQp0

Yeah and it’s not something that is smart to organize a populist campaign moment around. Still very puzzled. https://t.co/ISPSN5BGrd

Did Harris actually just attack Warren because she won’t call for Trump to be banned for twitter??

Kamala Harris going after Elizabeth Warren on banning Trump from twitter is one of the more pathetic stunts I’ve seen in a debate.

I cannot believe @KamalaHarris is pushing this suspend Donald Trump’s twitter account bullshit at a presidential debate. It’s so small ball. She is bigger and better than this.

Kamala lamely going after Warren for not having Twitter ban Trump. This ain’t it. #DemDebate4

Clearly @KamalaHarris thinks this is her big play tonight, forcing @ewarren to agree to shut down Trump’s Twitter account. Interested to see how that plays out. #DemDebate

C’mon, Kamala. Taking down Trump’s Twitter feed is not a national issue.#DemocraticDebate

Kamala Harris really thinks she’s onto something here with kicking Trump off Twitter.

8 million things to fix in this country and Kamala Harris is spending several minutes going at Elizabeth Warren for not trying to kick Donald Trump off of twitter.

And props to some of those who supported Harris.

I think this is a fair distinction between @KamalaHarris and @ewarren. Harris wants to kick Trump off of Twitter. Warren wants to break up Twitter.
I agree with both of them, I think. But, I think Harris’s position makes my 1st A spidey senses tingle a bit more, but is also right

I agree with Kamala Harris that Trump’s twitter account should be shut down. Based on Twitter’s own terms and conditions, the man has violated it them for years. #DemocraticDebate

Retweet if you agree!!!

Apologies won’t help now, but maybe these folks can reflect on what they should do the next time they have an opportunity to be right about something this important. Especially the journalists.