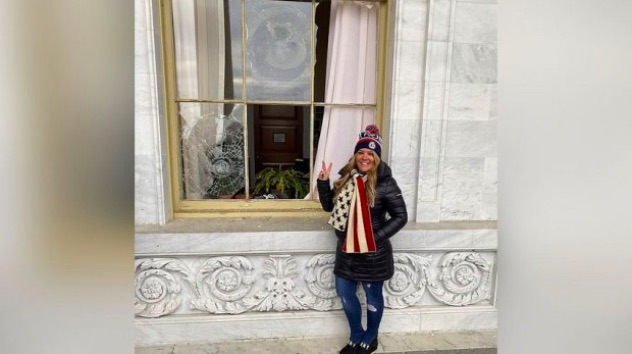 North Texas realtor and Trump supporter Jenna Ryan pleaded for a presidential pardon outside the front door of her house on Friday, after being arrested for participating in the storming of the U.S. Capitol last week.

Ryan told a CBS DFW 11 reporter that she could not discuss the details of the case, but said her decision to attend last Wednesday’s protest, which ultimately turned into a violent insurrection where one police officer was killed and Vice President Mike Pence was targeted for assassination, was simply a case of “basically following my president. I was following what we were called to do.”

Despite her refusal to talk about that day’s events because of the charges against her, Ryan has already left a wealth of documentary evidence online about her intentions and conduct on January 6th.

Prior to arriving at the pro-Trump rally, she posted a picture of herself next to the private jet she and a few other Trump fans were taking to Washington, D.C. Once she’d joined the Trump supporters in the city, she posted a video of herself walking toward the Capitol, saying: “This is a prelude going to war.”

She later posed next to a broken window at the Capitol and issued a threats to news organizations, while smiling and flashing a peace sign in a photo she posted on her Twitter account, which has since been deleted.

Ryan also live-streamed herself surging into the Capitol, right after saying “I’m not messing around” and boasting of her prowess as a real estate agent.

Texas real estate broker, Jenna Ryan: “I’m not messing around. When I come to sell your house. This is what I will do. I will f*ckin sell your house.” Then storms into the Capitol. pic.twitter.com/CVLJV6DjHz

Nine days later, however, Ryan complained to the news crew about the backlash to her involvement in the unprecedented attack on the Capitol. “I do feel a little wronged in this situation because I’m a real estate agent,” she said. “This has taken my company. This has taken my business.”

Still, Ryan insisted that she didn’t feel any shame or guilt in having joined the mob storming the halls of Congress.

Donald Trump, of course, was impeached by a bipartisan House majority on Wednesday — the second such rebuke of his presidency, a new record — for inciting an insurrection at the Capitol.

“I think we all deserve a pardon,” Ryan insisted, before explaining how she and hundreds of others are now confronting the consequences of their actions. “I’m facing a prison sentence. I think I do not deserve that and from what I understand, every person is going to be arrested that was there, so I think everyone deserves a pardon, so I would ask the President of the United States to give me a pardon.”

Watch the video above, via CBS DFW 11.