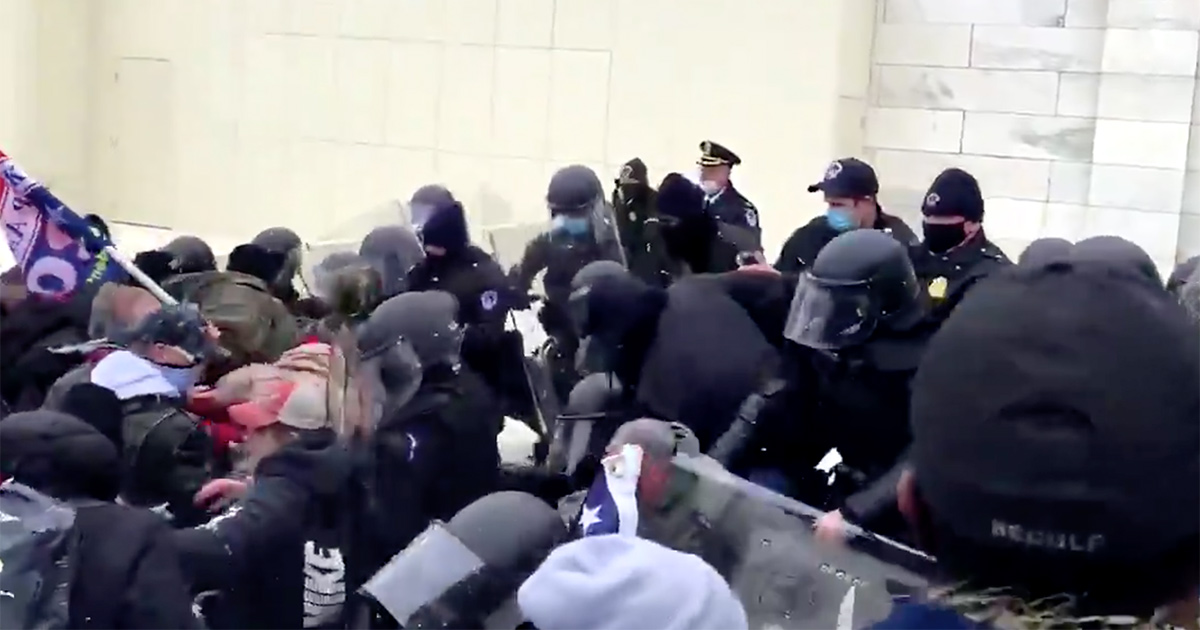 Chaos erupted in Washington D.C. near the Capitol on Wednesday when Trump supporters clashed with police and tried to literally storm the Capitol.

And no, that is not an exaggeration.

The Trump supporters smashed down barricades and got really confrontational with the Capitol Police as they tried to head for the building where Congress is currently tallying the 2020 election results. (Joe Biden is the winner and will be inaugurated, but Republicans are voicing objections anyway.)

There’s already a ton of video on the ground showing how dangerous things are getting:

Pro-Trump protesters have breached the barricade behind the Capitol building and are yelling to “move forward.” pic.twitter.com/hbJdNj6Knt

BREAKING: Trump supporters have breached the Capitol building, tearing down 4 layers of security fencing and are attempting to occupy the building — fighting federal police who are overrun

This is the craziest thing I’ve ever seen in my life. Thousands, police can’t stop them pic.twitter.com/VVdTUwV5YN

Hundreds of Trump supporters have stormed the barricades at the back of the Capitol and are marching toward the building. pic.twitter.com/68nB7QyiP9

Trump supporters are trying to break past police lines at the Capitol building.pic.twitter.com/kzLo2vWyfq

This is just straight up turning into a brawl between police and patriots.
Washington, DC #StopTheSteal #DCProtests pic.twitter.com/VZAAD0QZC7

Before he ended his speech — in which he got people fired up with his baseless claims and conspiracy theories about voter fraud — the president of the United States told his supporters, “We’re going to walk down to the Capitol and we’re going to cheer on our brave senators and congressmen and women.”

“I know that everyone here will soon be marching over to the Capitol building to peacefully and patriotically make your voices heard,” Trump said.

Meanwhile, buildings close to the Capitol are being evacuated because of how dangerous it is right now:

Scenes from Cannon: A police officer stood in the center of the rotunda and shouted: “EVERYONE OUT, RIGHT NOW … WE’RE EVACUATING”

US Capitol Police have evacuated two buildings on the Hill, the Madison Library of Congress Building and the Cannon House Office Building, where our crew is set up.

Here’s a look at some staffers and press waiting in a hallway in the Longworth House Office Building. pic.twitter.com/MyMlSNqEUt