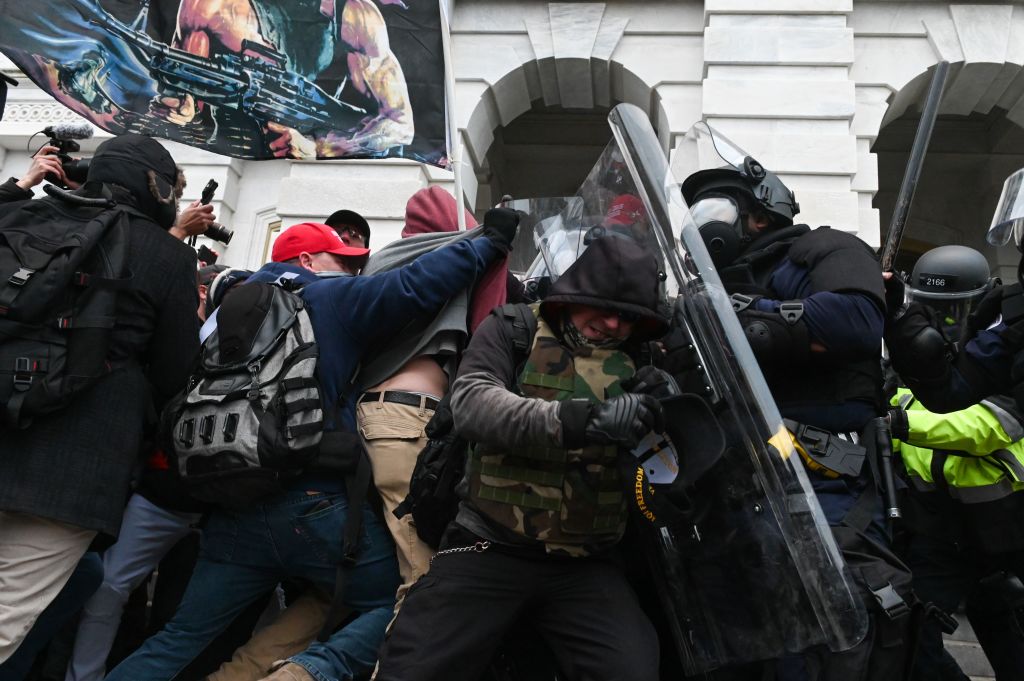 Metropolitan Police officer Michael Fanone was nearly killed as he fought off a pro-Trump mob on the West Terrace of the Capitol last Wednesday, after he was knocked down, beat with pipes, and tased  by his own stun gun.

Throughout the entire, violent assault, the rioters chanted “U.S.A.!”

Fanone’s near-death encounter is detailed in a chilling report in the Washington Post, which profiles the D.C. Metropolitan Police’s role in defending the Capitol. The 3,800-member force arrived on scene as one of the few back-up forces to arrive and support the overwhelmed Capitol Police.

The 40-year-old Fanone was on assignment elsewhere in Washington, when dispatchers issued an citywide emergency call for support as a MAGA mob laid siege to Congress. He and his partner rushed to the scene and set a perimeter to block one set of doors into the Capitol.

“We weren’t battling 50 or 60 rioters in this tunnel,” Fanone told the Post. “We were battling 15,000 people. It looked like a medieval battle scene.”

Not long after taking their position, Fanone’s helmet was grabbed by a rioter, who used it as leverage to pull him to the ground and drag him down the stairs. A second Metropolitan cop also fell to the mob as well. Now lying prone, other rioters descended upon him hammering at him with metal pipes torn off the nearby scaffolding already being erected for President-elect Joe Biden’s inauguration.

Both were struck with stun guns. Fanone suffered a mild heart attack and drifted in and out of consciousness.

“We got one! We got one!” Fanone said he heard rioters shout. “Kill him with his own gun!”

The Post notes that five dozen Metropolitan Police officers were injured during the Capitol assault, among them were “bruised and sprained limbs, concussions, and irritated lungs.” One Capitol Police officer died from his injuries, and another who was on scene committed suicide this past Saturday.

Fanone said he feared for his life — frightened that his weapon would be used against him — as the rioters pulled him farther down the steps and away from his fellow officers.

“I was being beat from every angle,” he recalls. “I thought, maybe, I could appeal to somebody’s humanity.”

Only after a surge of officers pushed into the mob, swinging their batons, was Fanone’s partner finally able to pull him back to safety.