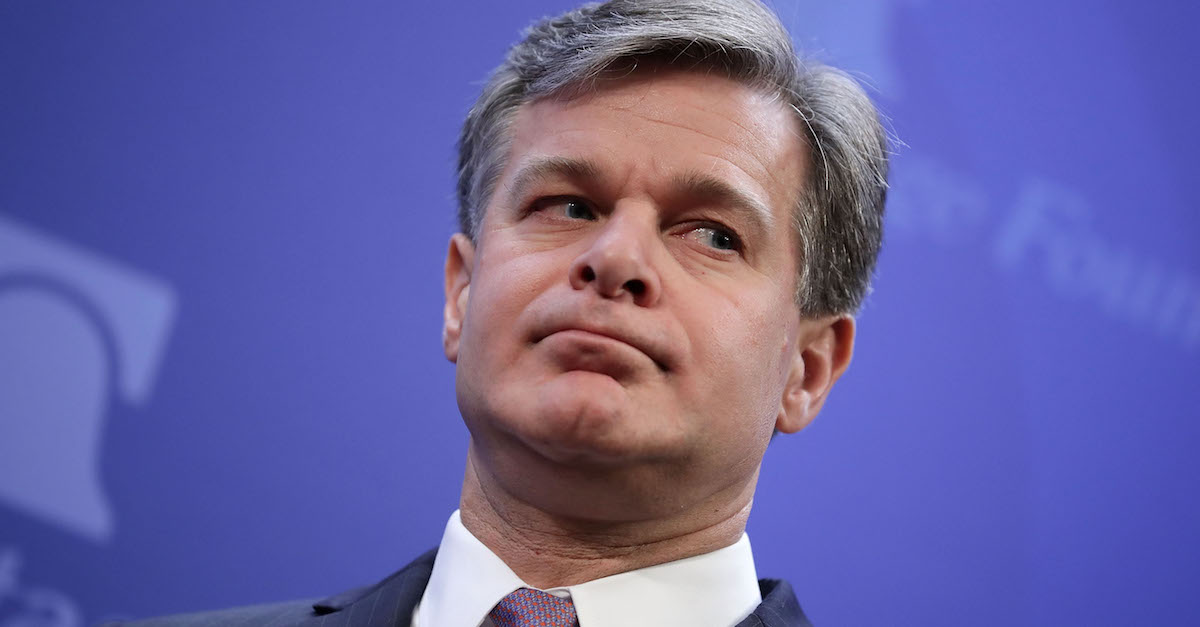 FBI officials and members of the Department of Justice held a press conference Tuesday to announce updates on the investigation into the pro-Trump mob that violently attacked the Capitol last week — but two key members were missing.

Both FBI Director Chris Wray and acting Attorney General Jeffrey Rosen were absent from the briefing, sparking people to question how “a dead police officer and an assault on the U.S. Capitol intended to kill Speaker Pelosi and the Vice President” didn’t warrant their attendance.

While FBI official Steven D’Antuono and interim United States Attorney for D.C. Michael Sherwin were able to deliver coherent updates themselves, viewers of the presser condemned Wray and Rosen for failing to address the nation following a domestic terrorist attack.

This is good news, if accurate. No offense to Sherwin, but Wray and Rosen should have been the ones to say this. https://t.co/sIy6ktIzFS

Where in the world is Christopher Wray?

Whether or not they intended it, the absence of acting AG Rosen and FBI director Wray from that law enforcement press conference risks sending the signal that the Trump administration is NOT taking this terrorist attack on the US with the utmost seriousness.

Where was @FBI Director Wray and Acting A.G Rosen? Why weren’t they at this presser? Unbelievable.

It’s absolutely insane that no leadership thought this event important enough to attend the briefing. It should’ve been Wray and whoever fuck is running the DOJ these days.

Thread on the press conference at the DOJ that just concluded.

Apparently neither FBI Director Chris Wray nor Acting Attorney General Jeffrey Rosen feel like they need to address the public at all, or maybe they had better things to be doing, because neither was there. https://t.co/JTSQpoznOF

So, where are Wray and Rosen?

After six days of inexplicable silence.

I am sorry that a dead police officer and an assault on the U.S. Capitol intended to kill Speaker Pelosi and The Vice President did not warrant warrant your participation at a press conference.

Was Christopher Wray too busy to FUCKING ADDRESS THE AMERICAN PEOPLE ABOUT A FUCKING DOMESTIC TERRORIST ATTACK OF THE FUCKING CAPITOL THAT HAPPENED ALMOST A WEEK AGO MY GOD!!!

I do wonder why neither FBI Director Wray nor Acting Attorney General Jeffrey Rosen have addressed the public about the Capitol attacks.

What was so important that Director Wray could not show up to the first presser about the insurrection that happened 6 days ago? Did he not want to alienate Trump Family? Wray needs to be replaced with someone who is unquestionably loyal to the republic, not the Trump Family. https://t.co/7rbRwurXnT

Echoing the question in my replies… You do wonder where is Director Wray?

I just watched the DOJ briefing… where was Chris Wray? We have a siege on the Capitol and the FBI director is MIA? WTF?

The acting US atty in DC is making significant announcements about forthcoming sedition and conspiracy charges — people are going to be “shocked,” he says about what they’ve uncovered. **The FBI Director and Acting Attorney General are not present for this briefing.**

Where is Chris Wray?

Where are Chris Wray and Jeffrey Rosen? Shouldn’t they be the ones briefing on an unprecedented attack on the US Capitol?