You can’t fix the economy without getting control of the virus.

Governors in states like Texas, Florida, Georgia, and Arizona happily followed Trump’s advice to relax restrictions and reopen their states in the midst of a pandemic. This is the result. 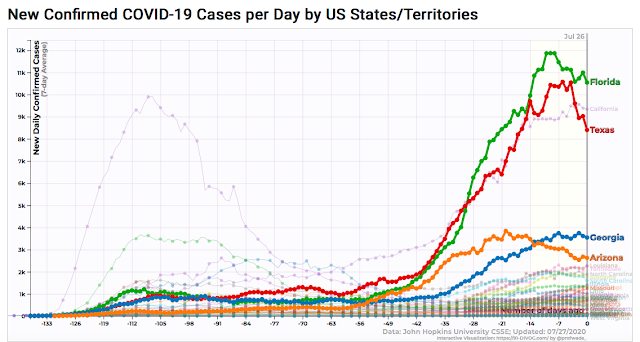 Monday morning’s news that at least 14 members of the Miami Marlins and their staff have tested positive for the novel coronavirus in recent days was chilling. The immediate consequences were the postponements of the Marlins’ home opener against the Orioles and the Phillies’ home game against the Yankees, who would have been occupying the clubhouse those Marlins just showered and dressed in Sunday.

The wider effect: Back-to-normal, or even semi-normal, in sports was shattered, just days after being reintroduced.

In the midst of all of that, Allison Shuster wonders why Democrats are resisting the Trump administration’s pressure to reopen schools in a few weeks. The president says it’s all political.

Corrupt Joe Biden and the Democrats don’t want to open schools in the Fall for political reasons, not for health reasons! They think it will help them in November. Wrong, the people get it!

But writing about the pandemic’s impact on sports, Thomas Boswell summed up the situation well.

Why are we here? The answer is pretty simple, yet inexplicably unacknowledged in wide swaths of this country: The pandemic is in control, and it stays in control until you stop it, suppress it, dominate it and crush “the curve.”

America has not come within a million miles of that outcome — though many other countries have…The entire American experience of this pandemic has been: Stay ahead of this virus or it will crush you.

That is essentially what Joe Biden said not long ago.

Amazingly, [Trump] still hasn’t grasped the most basic fact of this crisis: To fix the economy, we have to get control over the virus.

Donald Trump is acting like a child who just can’t believe this pandemic has happened to him. pic.twitter.com/06xilwAmlV

One has to wonder how many people will have to lose their health, lives, and livelihoods before people like Trump, DeSantis, Abbott, Ducey, and Kemp begin to understand that basic fact—or if they ever will. It’s not like their ignorance is gaining them anything politically. All of them are sinking like rocks when it comes to job approval ratings.

If the stated goal of all of this nonsense is to reignite the economy in order to help Trump and Republicans in the November election, they are failing miserably and will continue to do so.

As an example of that failure, Trump and his spokespeople continue to say that testing for COVID-19 is no longer a problem.

We do more testing than any country in the World, by far, over 55 million tests. Fake News @CNN says we should do more testing. But even if we did 100 times more, they would then say it is still not enough. They are totally discredited, just want Sleepy Joe to win in November! https://t.co/eqtBtXrEzJ

But from Senate candidate John Ossoff in Georgia, we hear a completely different story. Ossoff’s wife is a medical professional and tested positive, so he needed to be tested. Here’s what happened.

I’m good at the internet and I’ll be honest — it wasn’t easy to figure out testing in Georgia. The state’s DPH web site is just plain bad. An isolated & ailing senior would have a lot of difficulty. I finally found the info I needed on Fulton County’s website.

I arrived at the testing site at 8:30 this morning (it opened at 9) and got my test by around 10. The line was much longer by then. I was told to expect results in 2-4 days. Clinics I called last night (some charging $200) and CVS stores in Georgia currently estimate 6-10 days.

Senior docs I’ve talked to confirm there’s a shortage of accurate rapid tests in Georgia, which is a big problem. Labs are having trouble with timely turnaround even for normal tests — and there are severe shortages of reagents (chemicals used for testing & processing).

We’re in Month Five of this pandemic. Testing shortages are totally inexcusable.

Everything we know about dealing with this pandemic is that it all starts with adequate and timely testing. Obviously that isn’t happening in Georgia, even as the number of cases continues to rise. What is that doing to the economy? Last week Georgia ranked second highest in the number of unemployment claims filed—lagging only behind Florida. That’s what happens when you fail to grasp the most basic fact about the pandemic: “Stay ahead of this virus or it will crush you.”