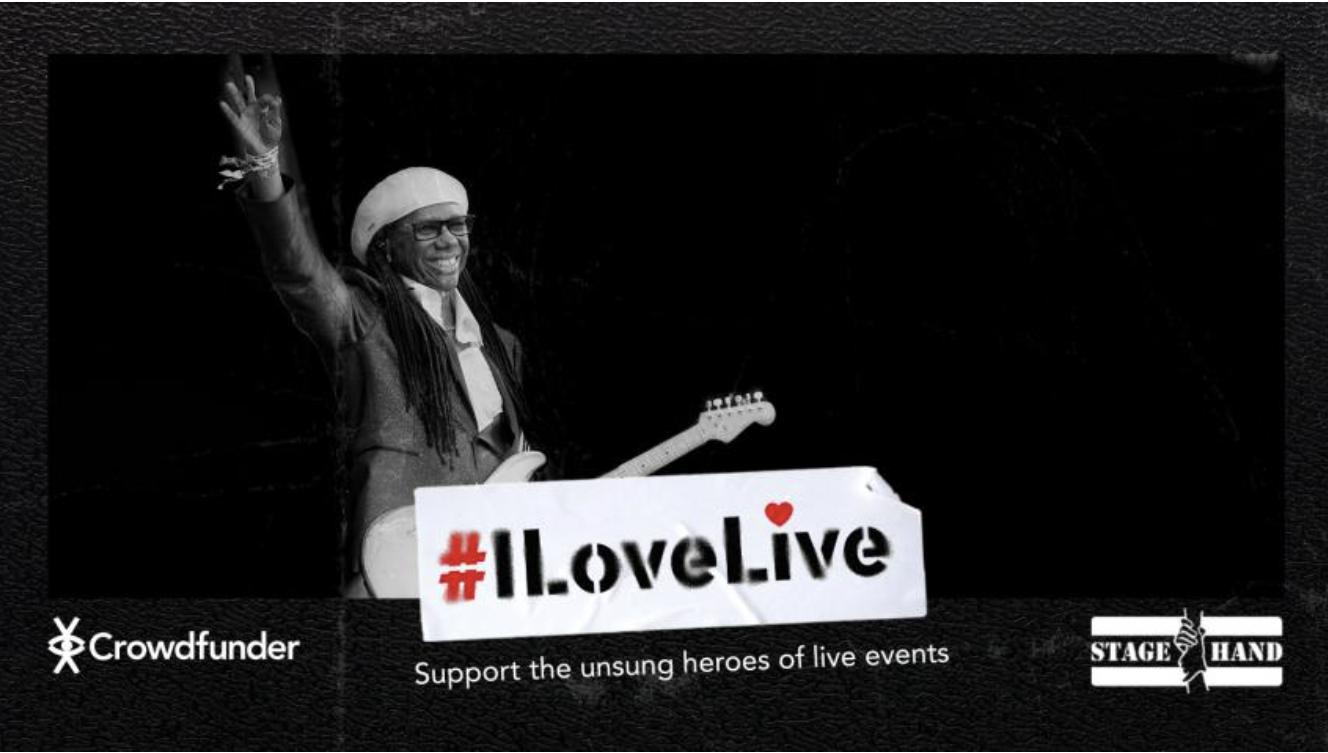 Fancy owning a bit of music history? Well, here’s your chance, as Stagehand in partnership with Crowdfunder, have launched #ILoveLive, a prize draw campaign organised to raise funds for the production staff and stage crew impacted by the loss of work caused by the Covid-19 pandemic. Stagehand is the only UK charity specifically dedicated to providing hardship funding for live events industry workers, and aims to raise at least £1 million before Christmas.

Some of the exciting prizes on offer include a signed replica of Nile Rodgers’ classic 1957 ‘Hitmaker’ Fender Stratocaster; Mark Knopfler’s Fender Stratocaster (signed); Tom Bailey’s ESP guitar that he played at Live Aid in 1985 and some handwritten lyrics by Robbie Williams. That’s among other items donated by, among others, Eric Clapton, Craig David, Chemical Brothers, Liam Gallagher, Nick Cave and Florence Welch. For the full list go to the Crowdfunder website.

Workers within the live music industry are in urgent need of support. The industry was the first to close and will be the last to reopen, resulting in thousands of people facing immense hardship. The problem is intensified by the nature of the industry. Over 60% of the people working in the industry are freelancers without any support from a larger company and over 20% of all crew have discovered that they don’t qualify for any government support at all. Stage crew have been the forgotten ones in the current pandemic.

A former stage manager who has already received a grant from Stagehand said: “I can’t express how much this is going to help me. I woke up in tears this morning, upon the realisation that I had less than £10 to my name. I was desperately wondering how I was going to survive for the rest of the month when £500 landed in my account from Stagehand. Stagehand and all of the people who are creating fundraising projects are doing such an amazing thing for those of us who are currently unable to work in live music, and who have been unsuccessful in finding other work.”

The #ILoveLive campaign gives fans the chance to give something back to the people who make life-affirming live events happen and to win money-can’t-buy prizes from their favourite artists. The #ILoveLive campaign, in partnership with Crowdfunder UK (who have waived their platform fees), features a list of all of the artists who have contributed prizes. Fans can choose which artists they want to buy tickets for, and can increase their chances of winning by purchasing multiple tickets. Tickets are priced at £5 each. The draw is now live and remains open until 6.00pm on 17 December. The winners will then be chosen on 23 December and prizes will be sent out in January.

The #ILoveLive campaign has been spearheaded by artist manager and promoter David Stopps with Andy Lenthall and Mike Lowe at Stagehand. They appealed to PPL, the BPI, major record labels and artist management companies, and raised £280,000 – most of which went to the 300 crew members in the most desperate need earlier this month.

The idea for a prize draw was suggested by Ian McAndrew of Wildlife Entertainment, whose management roster includes Arctic Monkeys and Royal Blood. He had previously set up a similar draw with Arctic Monkeys to benefit the Music Venue Trust.

David Stopps said: “When I heard about the tenth suicide among stage crew in late August I knew I had to do something. Stage crew are not only suffering great financial hardship but most are also experiencing ill mental health.  Money raised from these prize draws will actually save lives and help to safeguard their future.”

Rob Love, CEO of Crowdfunder added: “This is a really exciting campaign and we are thrilled to be partnering with Stagehand and an array of incredible talent. Running prize draws with money-can’t-buy prizes can be a really effective fundraising tool. This crucial campaign will help support the ‘behind the scenes’ workers in the live music industry who have been left without work for months.”