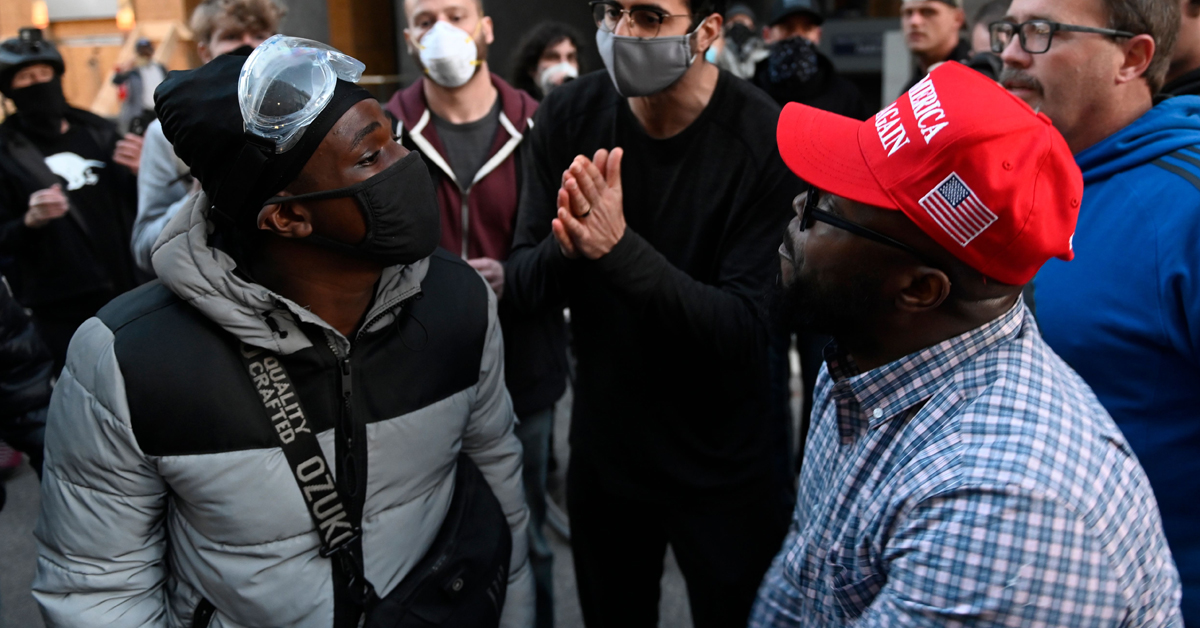 Supporters of President Donald Trump confront counter-protesters during a pro-Trump rally on November 14, 2020. (Photo by Andrew Caballero-Reynolds / AFP via Getty.)

Following the huge rally of supporters of President Donald Trump in D.C. on Saturday, incidents of violence broke out around the city as the marchers began to disperse and were confronted by counter-protesters. The phrase “ANTIFA and BLM” quickly became a trending topic on Twitter.

In most cases, the only identification of the involved parties is from the individuals sharing the video from the scene. But in general, the videos were part of the trending “ANTIFA and BLM” topic on Twitter, which later became just a trending topic for “Antifa.”

Throughout the day there were various reports of confrontations and even scuffles, including between the militant far right group The Proud Boys and groups carrying Antifa flags and gear. As the day turned into evening, and the crowd began to disperse, the scuffles involved smaller groups, but a great deal more direct violence.

Townhall’s Julio Rosas, formerly of Mediaite, caught some of the most viral footage during the aftermath of the march.

Antifa and BLM members attack people who are eating dinner near BLM Plaza. They threw projectiles and a large firework. pic.twitter.com/w96nbZaJ8F

DC Police rush to protect the entrance of a hotel near BLM Plaza. Lots of shoving by police. pic.twitter.com/KMoZOWjQOm

DC police make some arrests and use pepper spray as they push back the anti-Trump crowd. pic.twitter.com/FrVmNK6JZC

Antifa/BLM continues to attack Trump supporters who are eating outside with fireworks in Washington, DC. pic.twitter.com/8k32VN4Sm7

Here’s more from Phillip Nieto, of Daily Caller and also formerly of Mediaite.

“What are you going to do bitch?”

And from Joe Kalil at NewsNation.

Things are getting a little more tense now outside the White House, big groups dueling protests- there was a MAGA hat burned, led to some pushing and shoving. Lots of police getting into the middle of it @NewsNationNow pic.twitter.com/gre53RRSIk

Clashes got violent in DC. This was the aftermath of one skirmish -looked like a few proud boy gear got into it with some vocal anti-Trump counter protesters @NewsNationNow pic.twitter.com/Cixth6wrOD

A number of videos have gone viral from non-Verified accounts. The Verification process has been closed to new users for some time, and the blue check press haven’t shared many videos, so here are some of the ones that went viral.

You can hear see and hear the female Trump Supporter cry in fear pic.twitter.com/No1QDp4KLd

Fight breaks out on BLM Plaza between a family supporting Trump and pro-BLM supporters moments ago. DC police trying to calm the situation and separate groups. Sad scene , children are crying and very scared. pic.twitter.com/tWHta2iZFq

things are getting very heated in #BLMPlaza with #Antifa after the #MillionMAGAMarch, Police are now rescuing Trump supporters from the area pic.twitter.com/NB1nIelYwh

fighting broke out earlier between Trump supporters and Antifa pic.twitter.com/iS3orwqyuP

At BLM plaza where Trump supporters are being ran out by BLM and ANTIFA members.

Right before I started rolling they grabbed this woman’s hair and stole her American flag.

Trump supporters are either being escorted out by police or attacked by a mob pic.twitter.com/WObSZ44lQW

Brutal assault by a violent armed group who was later arrested for assault and illegal weapon (firearms and concealed knives) charges. pic.twitter.com/vuj2Hn6hj5

Really fun scene front of the Capitol Hilton where out-of-town Trump protesters are staying and yelling at counterprotesters to “go home!” pic.twitter.com/TfWCCVWee8

Although some face-offs appear to still be going on in some locations, overall police have begun to restore order.

#breaking view from above where the police have divided trump supporters (who are still here from #MillionMAGAMarch) from counter protesters- things appear calm, some yelling from opposing sides but police appear to have control. #washingtondc #protests pic.twitter.com/RGIFCuT1fm

The news in the last hour the news has spread from social media to the Washington Post and other publications.

Not cool: “When darkness fell, the counter protesters triggered more mayhem as they harassed Trump supporters and set off a large firework just outside a restaurant, prompting police to pepper spray the instigators.” https://t.co/eNqfYYL530

There were many reporters, crews, and photojournalists on scene throughout the day, and those reports may show up more on cable and elsewhere overnight and into Sunday.

UPDATE: The situation has escalated.

We’ll keep monitoring and update this post if needed.