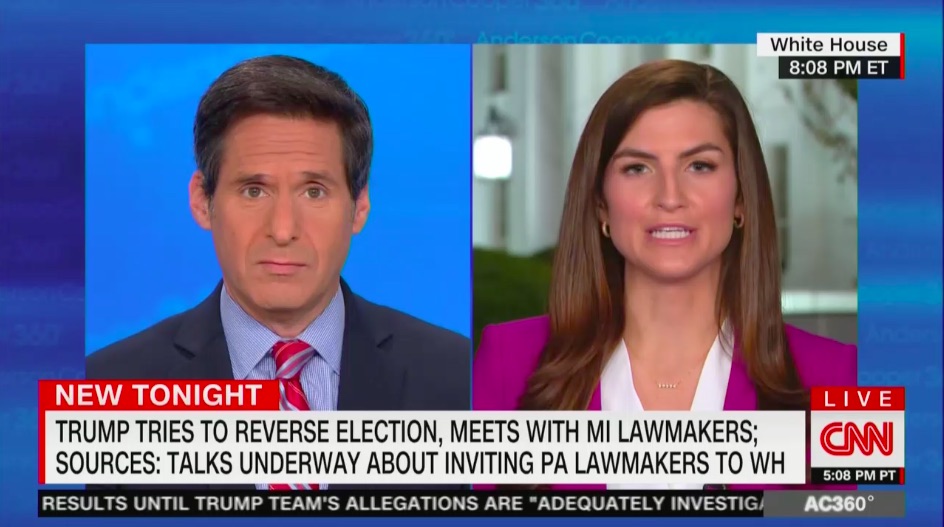 Tucker Carlson Tonight suffered a rare ratings defeat on Friday night in the coveted 25 – 54 age demographic, falling to a John Berman-hosted version of Anderson Cooper 360, as CNN enjoyed yet another post-election sweep in both total day and primetime.

According to Nielsen Media Research, AC360 was tops in all of cable news on Friday with 604,000 viewers in the demo, barely edging its 9:00 p.m. successor, Cuomo Prime Time, which was cable news runner-up of the day with 603,000 viewers. The guest-hosted AC360 handily won its 8:00 p.m. timeslot over Carlson, which attracted 534,000 A25 –54 viewers, on a night when the Fox host offered a highly anticipated response to Trump lawyer Sidney Powell, after she angrily dismissed his skepticism of her baseless election fraud claims earlier in the day. And one day after its host’s emotional return, The Rachel Maddow Show landed in the top three in cable on Friday with 586,000 viewers in the demo, knocking Fox’s Hannity special down to third at 9:00 p.m. with 434,000.

On average, CNN comfortably won Friday primetime in the demo with 573,000 viewers. Fox News’ 464,000 A25 – 54 viewers barely eked out a second-place finish over MSNBC, which attracted an audience of 435,000. Fox, however, continued to be the most-watched cable network in primetime with 3.07 million viewers, with MSNBC close behind at 2.92 million, and CNN trailing behind with 2.31 million.

The post-election ratings surge continued to buoy CNN during daytime, as the network cruised to hour after hour of ratings wins in the demo on Monday and won total day in the demo. The network’s daytime ratings peaked at 5:00 p.m. as The Situation Room‘s 512,000 A25 – 54 viewers marked a surprisingly dominant victory over Fox’s ratings behemoth, The Five, which only mustered 402,000 viewers in the demo.