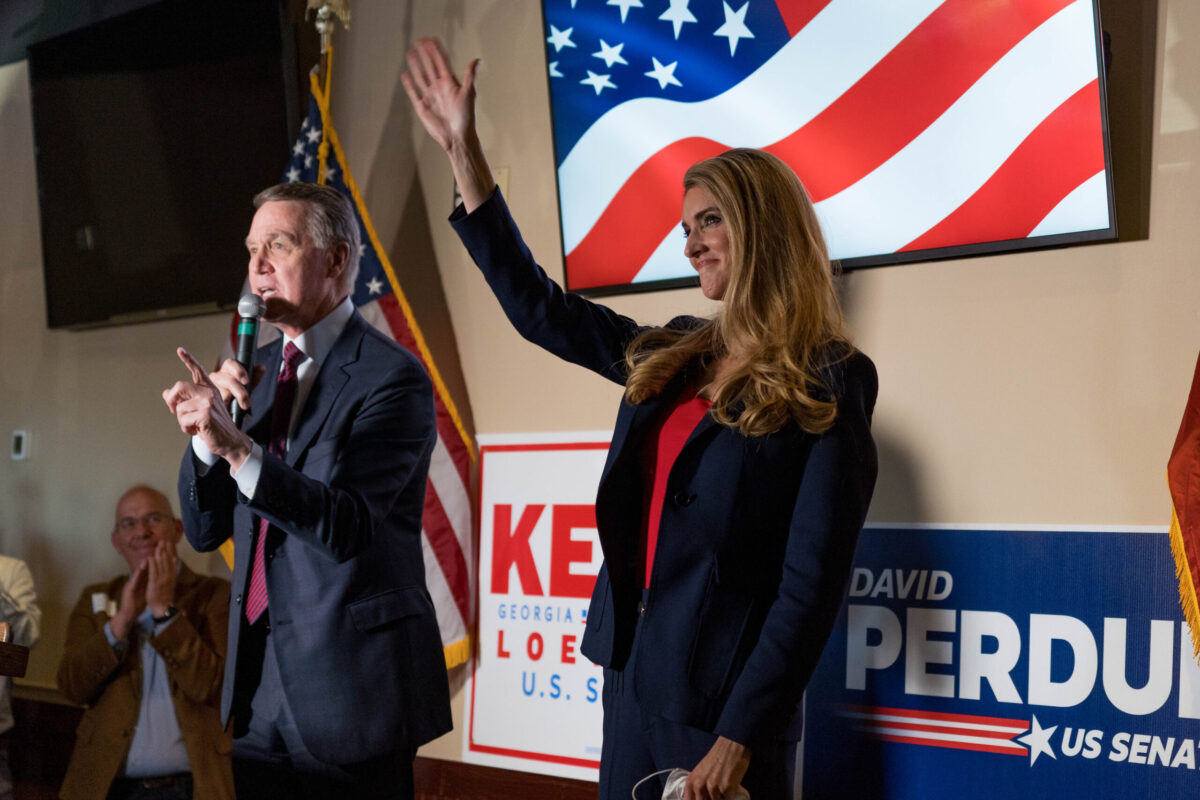 Conservatives went to war on Thursday over Georgia’s Jan. 5 runoff election, which will determine which party controls the Senate, after pro-Trump attorneys Lin Wood and Sidney Powell held a rally urging Republicans to refrain from voting in the election.

“We’re not going to go vote on January 5th on another machine made by China,” Wood told attendees at a Wednesday “Stop the Steal” rally in Alpharetta, GA. “Why would you go back and vote in another rigged election? For God’s sake, fix it. You gotta fix it before we’ll do it again.

At stake are Georgia’s two Senate seats, held by incumbent Republican Sens. David Perdue and Kelly Loeffler. Perdue prevailed in that election with 49.7 percent of the vote to 47.9 percent for his Democratic opponent, falling short of the 50 percent required to win outright and forcing him to compete in the Jan. 5 runoff — without a Libertarian candidate, Shane Hazel, who garnered 2.3 percent of the vote.

Loeffler, by contrast, obtained a paltry 25.9 percent of the vote, compared to 20 percent for fellow Republican Doug Collins and 32.9 percent for Democrat Raphael Warnock. Loeffler and Warnock will compete in the runoff sans a slough of candidates who each acquired marginal numbers.

The slim margins make it likely Democrats will win both seats if Republicans break ranks — creating a 50-50 split in the Senate. That dynamic has ironically fueled contention over Wood’s directive.

The Trump campaign quickly fired back on Twitter Wednesday evening, sharing a Breitbart article noting that Wood — a Georgia native and registered Democratic voter — has contributed to a number of Democrats, including President Barack Obama and Perdue’s Democratic opponent in 2014.

“While he did shift a little bit during the Trump era and made some donations to Trump and some congressional Republicans and to the Republican National Committee, per Federal Election Commission (FEC) records, Wood has long backed Democrats for federal office and especially for Georgia offices,” Breitbart’s Matthew Boyle noted. “Donations to Democrat Party politicians from Wood over a decade plus total more than $40,000, and span from as far back as 2004 through as recently as 2018.”

Breitbart editor Joel Pollak followed up with a Thursday column. “Republicans who boycott the runoffs are not helping Trump, or Georgia, or America,” Pollak argued. “They are helping Democrats, and socialism. And they could bury Trump’s MAGA legacy.”

Former House Speaker Newt Gingrich, who represented Georgia as a Republican in the House from 1979 until his resignation in 1999, echoed the comments. “Lin Wood and Sidney Powell are totally destructive,” Gingrich wrote Thursday on Twitter. “Every Georgia conservative who cares about America MUST vote in the runoff. Their ‘Don’t vote’ strategy will cripple America.”

Raheem Kassam, The National Pulse editor in chief who formerly led Breitbart’s London bureau, took exception with the attacks on Wood, which he described as “neoliberal signaling.”

“The GOP establishment puts party over country,” Kassam wrote on Twitter Wednesday. “Remember they dinged Trump for the same thing in 15/16. I don’t know Wood or his background. But I know this is a dumb hack reason to write someone off.”

The GOP establishment puts party over country. Remember they dinged Trump for the same thing in 15/16.

I don’t know Wood or his background. But I know this is a dumb hack reason to write someone off.

The Gateway Pundit took a similar stance in a Thursday column. “WTH? Breitbart Wages War Against Attorney Lin Wood,” blared a top-of-the-page headline from the website’s Jim Hoft. It added that Wood was “defending President Trump” against an “evil Marxist horde.”

Newsmax White House correspondent Emerald Robinson also chimed in, writing on Twitter, “Lin Wood did NOT say that Republicans should avoid voting for Loeffler and Perdue. He said that Loeffler & Perdue had to EARN your votes by getting Gov. Kemp to clean up the election system in Georgia.”

Amen. People need to stop misrepresenting #StoptheSteal‘s goals and what they are advocating in regards to the runoffs and beyond. https://t.co/fhg9NBLYu8

Trump is set to visit Georgia on Saturday to host a rally in support of Loeffler and Perdue.

More than a dozen Republican leaders in the state urged Republicans in a Wednesday statement to rally around their candidates, with some of the signatories including former Gov. Nathan Deal; former Sens. Saxby Chambliss, Johnny Isakson, and Mack Mattingly; and former Reps. Bob Barr and Jack Kingston.

“As former elected officials and long-time party activists, we must always act to ensure the integrity of the elections process,” the group wrote. “However, we cannot let this ongoing work detract from am mission that only Georgia Republicans can accomplish: maintaining control of the U.S. Senate so that our children and grandchildren can continue to enjoy the national security, economic opportunity and personal freedom that have defined our great nation since its founding.”