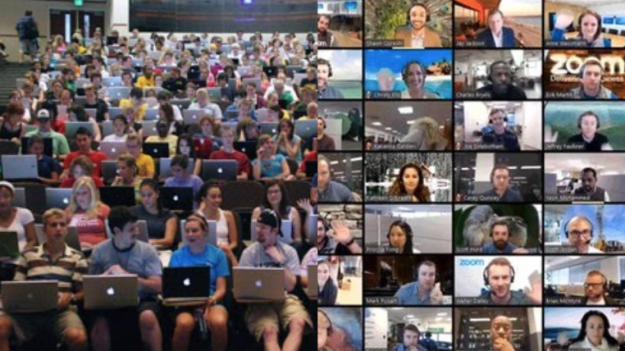 Death by Zoom: are we mistakenly trying to recreate the classroom instead of making something web-native?

A few weeks ago I was invited to talk at an online mini-fest about a ‘big idea’ for the future of online learning. I decided to talk about what I called ergodic education — how concepts from interactivity can be used to inform teaching as learners move online. In this post I talk about some of those concepts and how they can be adopted to a lockdown-era classroom.

Why ergodic education? The shovelware problem

Back in 2011 in the first edition of the Online Journalism Handbook, I created a simple diagram: the journalist, reader, and another reader connected by a triangle of double-headed arrows.

When we take our teaching online the same point is worth making: interaction between students is just as important as their interaction with us as teachers.

For my students, for example, that interaction takes place in Slack channels — but even there, the volume of my contributions risks establishing a ‘lecture’ culture rather than that of a genuine conversation.

But, looking at the classroom analogy of interaction between students, I realise that the picture with teaching isn’t that simple: our user (student) isn’t just communicating with other users (fellow students) — they may well be interacting with other things too: the presentation slides online, for example, or some related reading.

They may be getting alerts from (and posting to) a group chat, or receiving news alerts and emails.

In short, their attention may not be fully on what the lecturer is saying and showing.

In physical classes we can exert some control over those things: we can ask students to put phones away at the start of the class, or use them to look something up.

We can use our physical presence, movement, noise, touch and eye contact to provide a whole range of cues to students to re-focus on what’s being said or done.

In short, there’s a whole lot of interactivity in the physical world.

Classes conducted via Zoom and other platforms, however, don’t come with this interactivity by default. Instead they bring other forms of interactivity:

Another diagram from that first edition of the Online Journalism Handbook outlined four dimensions across which we can give users control: space, time, input and output.

Video classes can give the user control over the space, and time if recorded, where the learning takes place.

This can be liberating and empowering, but it also comes at the expense of control by the educator — and, by extension, that person’s power to judge and hold the attention of an audience, to involve them physically, and to adjust the delivery accordingly.

In other words, our ability to ‘tell a story’.

This is partly because video classes also reduce control over input into a story. In a physical class the students’ input into the lesson being delivered can be as subtle as a shuffle or the furrow of a brow, or as explicit as a question asked.

Much of that input is missed or made harder by the video format (conversely, new forms of input like the chat channel or ‘raising a hand’, may make it easier for some students to have an input into a lesson than would be the case in person).

A fourth dimension of control is over output: an example from physical classes would be the lecturer offering students an option on which topic to cover next, or asking if they would like to go off on a tangent based on a particular question.

Online, we can control output by clicking on a link to explore further, or choosing between a video and a transcript.

From the narrative era to the database era

Control over output is embodied in 21st century education in the Virtual Learning Environment, or VLE. A VLE is a website – Moodle and Blackboard are two of the biggest providers – that is used to manage the content given to students as part of their learning experience.

In requiring students to use this interface, we are also providing a degree of control over their learning experience — at least in theory — that reflects a wider shift noted in 1999 by the theorist Lev Manovich, who argued that we were moving from the narrative era to the age of the database:

“Historically, the artist made a unique work within a particular medium. Therefore the interface and the work were the same; in other words, the level of an interface did not exist. With new media, the content of the work and the interface become separate. It is therefore possible to create different interfaces to the same material.”

In the database model of education learners now have an interface. They have some choice over what elements of education – the lecture, the reading – to experience, and in what order.

But educators don’t tend to use these VLEs in that way: instead they are used as a repository, a place to keep material in case students need to find it. In other words, as shovelware.

We are perhaps missing some of the potential of the interface here for education.

I have been using Pinboard, for example, for a number of years as a way of providing an interface to students into my own knowledge bank: by bookmarking and tagging material on Pinboard I am able to say to a student interested in a particular issue: “Look at my bookmarks tagged ethics+research“, for example, and that student can create an entirely new educational journey which wasn’t planned as a narrative.

But I worry that this interface model of education risks being overwhelming: at the time of writing there are 68 resources tagged ethics+research: in giving control to my student I have also given them responsibility, and potentially anxiety.

To some extent that may be pedagogically valuable: the student will need to choose those resources most relevant to themselves, which is a valuable skill in itself.

But it could also be counter-productive: a student might feel overwhelmed or bored, and disengage from the material.

The dangers of the database

This tension between interactivity and storytelling is well-worn. Giving control over to the ‘people formerly known as the audience’ opens up all sorts of possibilities — but it also underplays our own talents as storytellers, and the audience’s desire to sometimes not be active: to sometimes simply be told a story rather than having to invest the effort required to make or complete a story.

When transferred to education this tension is further complicated by the fact that we are not simply giving an audience what they think they want — information, wrapped up in a story.

We are also trying to develop certain skills — to empower, in other words. We channel that power in particular ways, inviting the student to ask questions of things, challenging them at times. It can be hard work, for both parties, because it is work.

Manovich is worth quoting again, here, on the differences between databases and narrative:

“A number of database records linked together … is of course not sufficient [to be an interactive narrative]; the author also has to control the semantics of the elements and the logic of their connection so that the resulting object will meet [Mieke Bal’s] criteria of narrative.”

Is it possible to get the best of both worlds? To give the student control over their education while also giving them a compelling narrative to guide their experience?

From interface to interactive narrative

It might be helpful to look at research which has tackled this tension between interactivity and narrative.

Segel and Heer, for example, identify three models: the Martini Glass structure; the Interactive Slideshow; and the Drill-Down Story.

These models can be used to create a structure around our interactive education: in my own teaching, I realise, I tend to use the Martini Glass structure — delivering a lecture and workshop before providing a range of options for the students to pursue independently depending on their professional objectives and interests (via Moodle).

An interactive slideshow approach, in contrast, would provide that opportunity to branch off during the lecture: we might record our lecture, for example, and use YouTube cards (or interactive video tools like Touchcast) to add options for people to break off to learn more about something, before returning.

A drill-down story approach would involve giving freedom to learners to explore a group of thematically related resources from the start: in one class on preparing a newsroom, for example, I provide students with a range of pieces of research into newsrooms and ask them to read at least one before we come together to discuss and make plans.

Hegel and Seer identified three approaches that had become generic by the time that they were looking — but since then many more genres have become better established in the field of interactivity, from polls and quizzes to personalisation, chatbots and games (a rich area on its own).

‘Ergodic‘ storytelling, for example, where the user can choose their own path through a story, has seen a lot of development, including the creation of a tool — Twine — that makes it easier to create such narratives.

Rob Monday identifies a whole range of ergodic structures used in interactive documentaries, from the fishbone narrative where branches return the audience back to a main thread, to a parallel narrative with ‘touchpoints’ that everyone has to pass through, branching and threaded narratives that stay largely separate, and other forms beyond those.

As an educator these forms provide even more food for thought around how we might design the ‘learner journey’ and how that tension between narrative and interactivity might be played out.

And at that point in this ergodic narrative I will leave you to explore further.