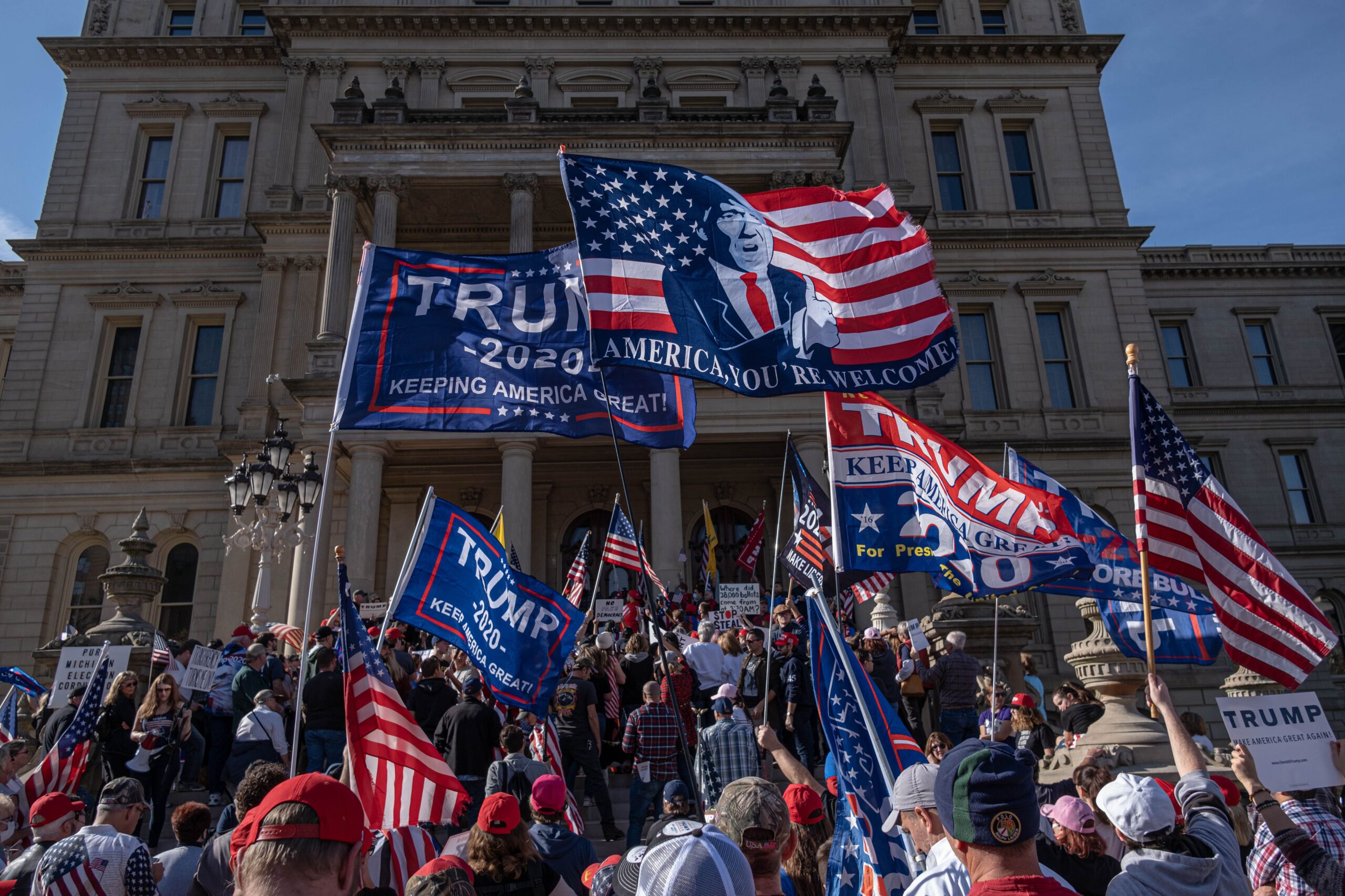 In the months preceding the 2020 election, President Donald Trump repeatedly insisted that widespread voter fraud would tarnish its results. Now that he has been projected to lose to Democratic opponent Joe Biden, Trump is making good on expectations that he would challenge the results, dispatching a team of political allies to flood Twitter, Fox News and the parking lot of Four Seasons Total Landscaping with unsubstantiated theories of voter fraud in the states he is closest behind.

A flood of bullshit has taken up disturbing velocity: anecdotes of potential fraud go viral on Twitter, reach millions on Facebook and are repeated by Fox News hosts days after they have been debunked. Top Republicans like Lindsey Graham have backed the president’s claims, and prominent voices in the party have pushed extreme rhetoric. Newt Gingrich called for police to jail the election workers counting ballots, accusing them of “stealing” the election.

The examples of alleged election fraud are trotted out at such a rapid clip that they are hard to keep track of, but the evidence is mostly lacking. This election was, as predicted, a tricky one, and the record levels of mail-in voting meant that states like Pennsylvania would need more time than usual to count the votes. Taking time to count more than 140 million ballots is not evidence of a stolen election.

There are also claims of election fraud in every election. The argument Team Trump is making is that this time the fraud is not negligible, and is enough to have stolen the election from the president. In his own examination of the allegations, Dispatch senior editor David French concluded the evidence just isn’t there.

If the Trump campaign does find evidence to support its claims, that evidence will be litigated in courts. As CNN legal analyst and former federal prosecutor Elie Honig told me on last week’s episode of The Interview podcast, their legal challenges are mostly bunk — and many have been swiftly thrown out of court. There is one that has some merit, but it has nothing to do with election fraud: In Pennsylvania, Team Trump is challenging a ruling by the state Supreme Court that allowed mail ballots that arrived up to three days after the election. The challenge could have legitimacy, but Honig said it would not be enough to change the results in Pennsylvania, where Biden currently leads Trump by more than 45,000 votes.

It’s worth examining the most prominent claims made by Trump and his surrogates in several states that are set to propel Biden to victory: Pennsylvania, Wisconsin, Michigan, Georgia and Arizona.

The most prominent election-theft conspiracy theory from Michigan went viral the morning after Election Night, thanks to a tweet from a conservative commentator.

Matt Mackowiak tweeted a screenshot from independent election data website Decision Desk HQ that apparently showed 100% of a batch of newly counted ballots going to Biden. But that information was based on a typo: Decision Desk HQ said it was an error, that 100% of the batch did not go to Biden, and corrected. Mackowiak deleted the post.

“Once we identified the error, we cleared the erroneous data and updated it with the correct data as provided by officials. We stand by our data as reflected on,” Decision Desk HQ said.

“This tweet was taken and share honestly. I have now learned the MI update referenced was a typo in one county,” Mackowiak wrote.

Still, his false post was retweeted by the president, and the theory spread far and wide, getting repeated on Fox News by Trump campaign legal adviser Jenna Ellis and pushed on Twitter by Fox Business anchor Maria Bartiromo. The president and the network did not issue corrections.

Another fraud claim, this time regarding ballot counting in Detroit, was put forward by Republican National Committee Chairwoman Ronna McDaniel at a press conference on Friday. She claimed election workers were told by a director by the name of Chris Thomas to backdate some ballots. Thomas explained to The Detroit News that the ballots were not backdated, but that some ballots that had clerical errors were corrected so that they could be counted.

“The bottom line here is: We don’t disenfranchise voters in Michigan based on clerical errors,” Thomas said. He noted that some Republican poll challengers asked about the issue, but after an explanation they declined to make a challenge.

“It’s nonsense, and they know that,” Thomas said.

Biden currently holds a sizable lead in Michigan: more than 147,000 votes. Baseless allegations aside, it would take an unprecedented amount of fraud for that race to have been stolen by the Biden campaign.

The Trump campaign has demanded a recount in Wisconsin, a state that Biden is currently winning by more than 20,000 votes, on the basis of alleged “irregularities.” One of those claims that went viral during election week falsely stated that the number of people who voted in Wisconsin was higher than the number of registered voters in the state.

One post by Trump campaign adviser Harlan Hill — which was shared by Eric Trump and Wall Street Journal columnist Kim Strassel — falsely claimed that Wisconsin saw an astonishing turnout of 89%.

As an AP fact-check noted, the calculation was based on a misunderstanding of how Wisconsin tallies voters.

“The Wisconsin Elections Commission calculates voter turnout based on the entire voting-age population, not just registered voters,” AP noted. “Any eligible person over the age of 18 can show up at a poll and register to vote on Election Day.”

The actual turnout in the state was 72%, which is in line with similar increases across the United States this year.

A Trump campaign lawsuit, which claimed a Republican observer “witnessed 53 late absentee ballots illegally added to a stack of on-time absentee ballots in Chatham County,” was swiftly tossed by a judge after the observer admitted he wasn’t sure if the ballots were added late, and the board’s witness testified they were.

The head of Georgia’s voting system rejected Trump’s claims of voter fraud outright on Monday. According to the Los Angeles Times:

Gabriel Sterling, a lifelong Republican who manages Georgia’s voting system, took to a lectern at the Capitol to plainly and matter-of-factly dismiss criticism of election illegalities in the Southern battleground state as “fake news” and “disinformation.”

An intra-party skirmish erupted in the state after those remarks, as Georgia’s two Republican senators called on Sterling’s boss, Georgia’s secretary of State, to resign over his handling of the election.

Sens. David Perdue and Kelly Loeffler — who both face a runoff in January — echoed Trump’s claims that votes were counted illegally in a joint statement.

The senators did not point to specific examples of failures, and their statement raised eyebrows, as Georgia’s vote counting process has generally been considered transparent. The secretary of state, Brad Raffensperger, said he would not be resigning.

Moreover, the Atlanta Journal-Constitution reports that Loeffler and Purdue made their statement under duress, as the president pressured the senators to issue the remarks. And with their runoff races looming, Loeffler and Perdue did not want to risk drawing Trump’s ire — which would have the electorally-fatal impact of turning his base against them.

Meanwhile, Geoff Duncon, the Republican lieutenant governor of Georgia, said on CNN Monday that “at this point, we’ve not seen any sort of credible examples” of election fraud.

Ever think that in the Trump era we would get two Sharpie-gates? The latest iteration: A viral claim that Republican voters were being given Sharpies to cast votes because the marker invalidated ballots.

The rumors sparked protests outside election centers in Arizona last week, and were spread by prominent figures involved in the Trump campaign’s election fight, like Matt Schlapp.

The claims were false.

“There is no concern about ballots being counted because of the pen that was used to mark the ballots,” Arizona Secretary of State Katie Hobbs said last week. “All of those ballots are being counted and even if the machines can’t read them for some reason, a marker bled through to the other side, we have ways to count them. They are going to be counted. There is absolutely no merit to saying that this was some conspiracy to invalidate Republican ballots. There is no there there at all.”

Over the weekend, lawyers who had filed suit in Phoenix challenging the use of Sharpies in voting told the court they were withdrawing their legal challenge.

Last but not least is Pennsylvania. With 20 electoral votes, it is the biggest electoral prize of those state whose results are being contested by the Trump campaign. It is also home to some of the campaign’s flimsiest, and most comical claims.

One prominent conspiracy theory about the vote in Pennsylvania alleged that 21,000 dead people voted in the state, mostly for Biden.

The false theory was covered by Breitbart and shared by Rudy Giuliani, Diamond & Silk, and Rep. Matt Gaetz (R-FL), according to the New York Times. It reached 11 million people on Facebook, according to an analysis done by the paper.

There is no evidence that 21,000 dead people voted in Pennsylvania. The state’s attorney general’s office said in a statement that “There is currently no proof provided that any deceased person has voted in the 2020 election.”

Then, there is a claim that Republican observers are being stopped from carrying out their job.

In a wild press conference at the White House last Thursday, Trump pushed a series of invented claims about the election, including the false allegation that Pennsylvania Democrats went to the Supreme Court in an effort to “ban” election observers from the rooms where ballots are being counted.

The claim is false, as fact-checkers have noted. No one has tried to stop Republican election observers from doing their jobs.

On 60 Minutes Sunday night, one of the three commissioners who runs elections in Pennsylvania — a Republican named Al Schmidt — dismissed Trump’s claims that there is anything nefarious going on.

“In the birthplace of our Republic, counting votes is not a bad thing,” Schmidt said. “Counting votes cast on or before Election Day by eligible voters is not corruption. It is not cheating. It is democracy.”

Schmidt also remarked on the death threats election workers have been receiving as a result of conspiracy theories about the election.

“From the inside looking out, it feels all very deranged. At the end of the day we are counting eligible votes, cast by voters. The controversy surrounding it is something I don’t understand,” he said.

By Monday, Trump pushed a claim that Republicans were not being allowed to monitor the ballot counting, writing on Twitter that, “Pennsylvania prevented us from watching much of the Ballot count. Unthinkable and illegal in this country.

The claim is one Sen. Ted Cruz pushed on Fox News last week. “By throwing the observers out, by clouding the vote counting in a shroud of darkness, they are setting the stage to potentially steal an election,” Cruz said of Pennsylvania.

Fear not, senator: No one threw observers out or counted the vote in a shroud of darkness.

“Observers from the Democratic Party and Republican Party, from the Biden campaign and the Trump campaign, have been in our counting area observing, right up against where the process is taking place, from the very beginning,” Al Schmidt told CNN last week.

Thus far, there is not a single allegation, and I mean allegation, worth investigating that could come close to changing the outcome. That isn’t partisan politics, it’s just facts and numbers.