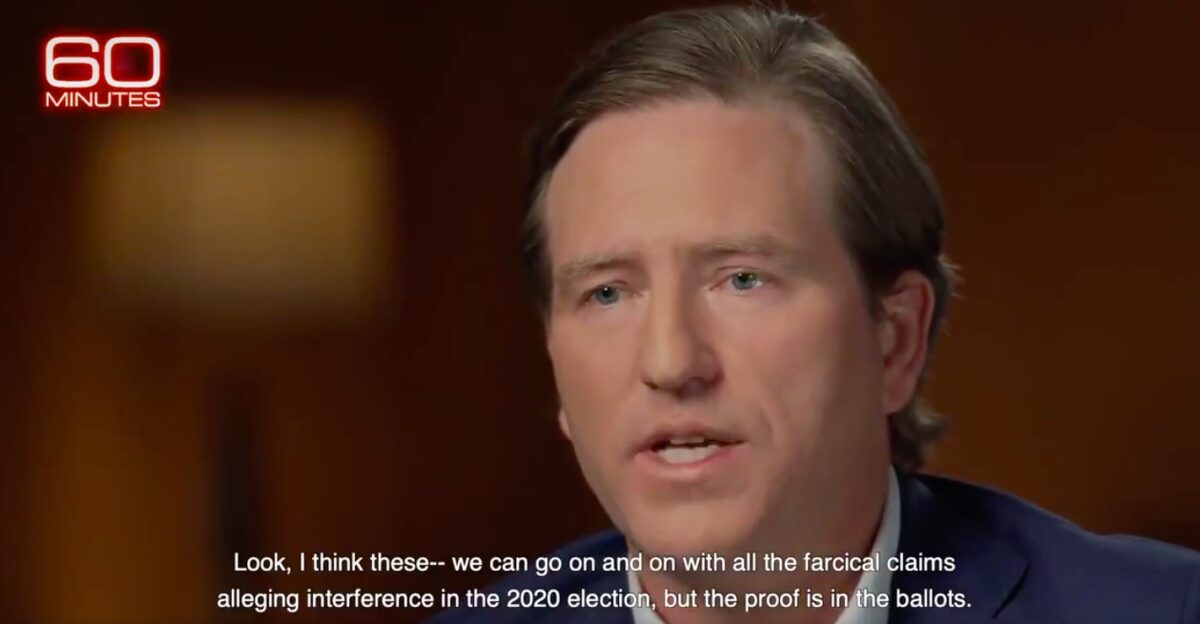 In a preview of 60 Minutes‘ upcoming interview with Chris Krebs, the former DHS cybersecurity chief patiently shot down each of the Trump campaign’s “farcical claims” about 2020 election fraud.

President Donald Trump angrily fired Krebs via Twitter two weeks after the election because the cybersecurity chief had debunked his campaign’s many conspiracy theories and certified the 2020 election as the “most secure” in the nation’s history.

“Let me ask you for your reaction to some of the vote fraud that the president and his team have been alleging,” Pelly asked, as Krebs soberly nodded his head.

The CBS anchor first addressed wild rumors that U.S. votes are being counted in a server in Europe.

Pelly then asked about the conspiracy that votes had somehow been corrupted by “mysterious actors in Venezuela.”

“So again, there is no evidence that any machine I’m aware of has been manipulated by a foreign power. Period,” Krebs emphasized.

What about Communists in Cuba and China secretly funding some kind of election fraud, Pelly brought up next.

“We can go on and on with all the farcical claims alleging interference in the 2020 election,” a weary Krebs replied. “But the proof is in the ballots. The recounts are consistent with the initial count, and to me, that’s further evidence, that’s confirmation that the systems used in the 2020 election performed as expected and the American people should have 100% confidence in their vote.”

There’s no evidence that voting machines were manipulated by foreign actors says Chris Krebs, the former director of the Cybersecurity and Infrastructure Security Agency, in his first interview since President Trump fired him.