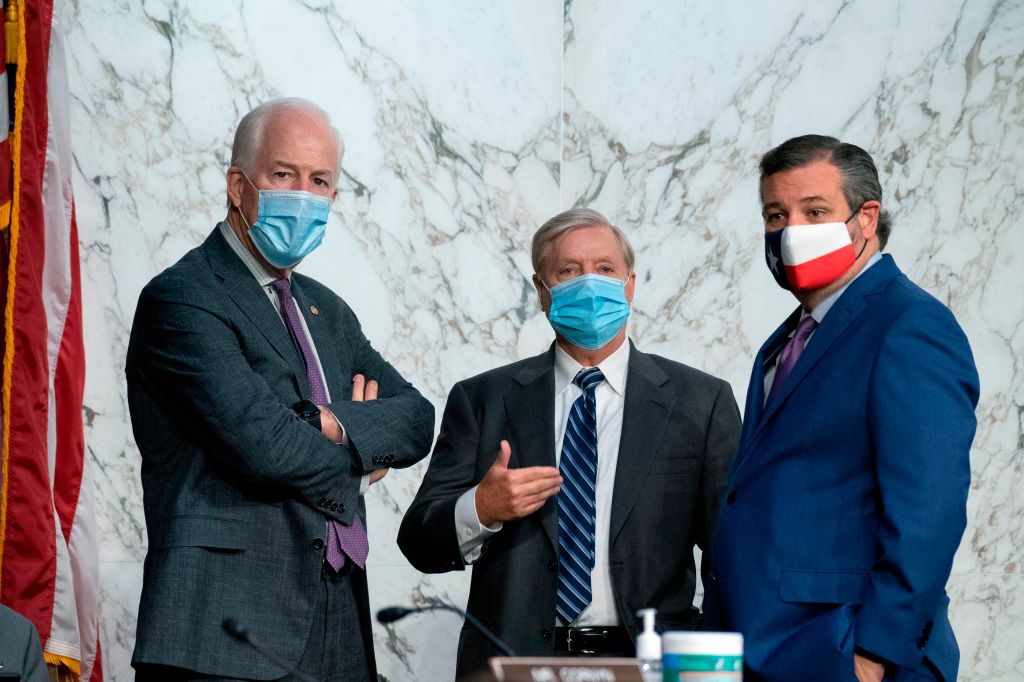 Donald Trump’s impeachment defense got off to a “pretty rocky” and “inappropriate” start on the first day of his trial for inciting insurrection — and to give a sense of how bad things were for the former president, many of those dismal reviews came from Senate Republicans.

Most notable among the critics was Louisiana Senator Bill Cassidy (R), who was so put off by the Trump’s team’s “disorganized” and “random” opening arguments that he switched his vote on the constitutionality of the Senate trial.

But Cassidy was far from alone. Even die-hard Trump supporter Sen. Ted Cruz, who votedagainst the Electoral College certification of Joe Biden’s victory after the Capitol insurrection, publicly conceded that. Cruz acknowledged that he didn’t think that Trump lawyers Bruce Castor and David Schoen  “did the most effective job” compared to lead House Impeachment Manager Rep. Jamie Raskin (D-MD).

“I don’t think the lawyers did the most effective job,” said Sen. Ted Cruz to @karoun when asked about Trump’s lawyers. He added that Rep. Jamie Raskin was “impressive” and a “serious lawyer.”

Likewise, two moderate GOP Senators Susan Collins (ME) and Lisa Murkowski (AK) came out and expressed their confusion about the meandering and unfocused nature of the Trump defense counsel’s performance.

Lisa Murkowski to Hill pool: “I couldn’t figure out where [Castor] was going, spent 45 minutes going somewhere, but I don’t think he helped with us better understanding where he was coming from on the constitutionality of this. And I felt that Mr. Schoen did a better job.”

“It did not seem to make any arguments at all, which was an unusual approach to take.”

She further called his call outs to Sasse and Toomey “inappropriate.”

Texas Republican Sen. John Cornyn also noted that the defense “just rambled on and on” in an argument that was “not one of the finest I’ve seen.”

CORNYN: “The president’s lawyer just rambled on and on… I’ve seen a lot of lawyers and a lot of arguments and that was not one of the finest I’ve seen.”

Mississippi Sen. Roger Wicker backed into a critique of the Trump team by praising the House Democrat Managers as the “better team this time.”

Hawley: “About what I expected.”

Staunch Trump ally Lindsey Graham singled out Castor for what seemed like the weird ad-libbing of an opening statement that was impossible to follow: “I thought I knew where he was going, and I really didn’t know where he was going.”

Sen. Kevin Cramer of North Dakota pulled no punches, however, admitting that Castor’s opening was “disorganized” and “frankly, a pretty rocky start” for the president’s first day on trial for incitement.

Bruce Castor told me “I thought the day went well” after his first day of arguments defending former President Trump.

GOP Senator Kevin Cramer told me he thought Castor’s arguments were “disorganized” and called it “frankly, a pretty rocky start.”

And, finally, in a classic case of “if you can’t say something nice, don’t say anything at all,” Sen. Joni Ernst tiptoed around a direct comment on Castor’s wandering and confounding statement in what was damning with missing praise.

GOP Sen. Joni Ernst says Schoen did a “beautiful job.” Asked about Bruce Castor: “Yeah, that’s, you know. Oh, well I think we spent too much time there visiting Pat Toomey and Casey, but I do think Schoen did a very nice job.”