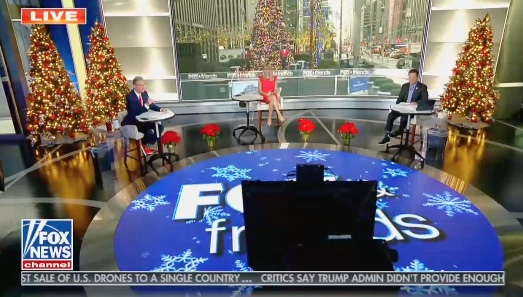 A total of 3,124 Americans died of Covid-19 on Wednesday, a new record. Viewers of the most-watched cable news morning show Fox & Friends would have no idea: This sad and shocking recording of lives lost was never mentioned Thursday between 6 a.m. and 9 a.m. on Fox News. Not once.

For context, more Americans died on Wednesday of this week than perished in the attacks of 9/11. These are qualitatively different stories, and 9/11 was a single day of infamy. Wednesday’s record death toll beats the record set the previous day, which is just the continuation of a gruesome but numbing trend. For a news network to ignore it is remarkably irresponsible.

Fox & Friends has long been known as the favored show of President Donald Trump. Their daily rundown of topics is typically designed to cater to his supporters, which is part of why the show is so successful. But it is rather remarkable that producers of this show made the intentional decision to completely ignore the massive death toll, the reasons for which one can only imagine.

There was a coronavirus-related segment that featured Dr. Marc Siegel (who in March revealed that the more he learned about Covid-19, the less he was concerned about it). This was more of a discussion on the FDA’s emergency approval of the Pfizer vaccine in the coming days, with no mention of the death toll.

So what topics took precedent to our national tragedy on Thursday morning’s episode of Fox & Friends?

Seventeen states joining Texas in its effort to challenge results in the presidential election. Rep. Eric Swalwell’s relationship with an alleged Chinese spy and his admittedly thin claim of political retribution. Hunter Biden being investigated for tax fraud, which led to lots of suggestions that President-elect Joe Biden may have to step down, and of course, criticism for how the media ignored the story. Charlie Kirk talking about how YouTube will start removing videos that spread false information. The pandemic is leading to surges in both hunting licenses and millions turning to food banks. Critical race theory is allegedly rooted in Marxism and one recently elected Congresswoman from Texas thinks Obamacare is a lie.

Fox & Friends is not a hard news show. It is light breakfast fare with a decidedly pro-Trump political bent. As such, the vast majority of the segments, like those listed above, are discussions about liberal bias, anti-Christmas grievances, and the unjust treatment of President Trump and his loyal base of supporters.

However, throughout the show are news reports designed to keep viewers reasonably up to date with the day’s headlines. Those stories featured on Thursday? A chemical plant explosion in West Virginia that took one life. A “massive” caravan of Honduran immigrants headed to the southern border. Ongoing congressional negotiations about a stimulus bill to address the cratered economy. And fabled toy outlet FAO Schwartz offering a one-night stay at their store for only $1,000!

Viewers also learned of Rudy Giuliani getting out of the hospital, a Michigan State Representative being stripped of committee duties, Minneapolis cutting their police budget, and a New Jersey synagogue holding a memorial for a deadly shooting at a Kosher market one year ago. Rep. Steny Hoyer was complaining about a shrinking Democratic majority in the House. Of course the big news of the day: Maria Carey returning to number one in the charts with her seasonal All I Want for Christmas hit song.

Not once in the headlines was there any mention of the record loss of more than 3,000 Americans to the coronavirus in a single day.

We can be forgiven for becoming numb to the non-stop cascade of depressing news surrounding the Covid-19 pandemic. This is a strange and surreal time, and some may choose to cope with the deaths of nearly 300,000 people by tuning out the news.

News outlets, however, do not have the luxury of ignoring news that makes its viewers uncomfortable. That should go for cable news programs of all stripes, news and opinion programs.

Peter Baker of the New York Times reported this week that President Trump, transfixed by his efforts to steal the 2020 election from Joe Biden, was ignoring a pandemic that experts say is entering its most deadly phase:

Moody and by accounts of his advisers sometimes depressed, the president barely shows up to work, ignoring the health and economic crises afflicting the nation and largely clearing his public schedule of meetings unrelated to his desperate bid to rewrite the election results. He has fixated on rewarding friends, purging the disloyal and punishing a growing list of perceived enemies that now includes Republican governors, his own attorney general and even Fox News.

Can the president be blamed when his favorite news program ignores it as well?