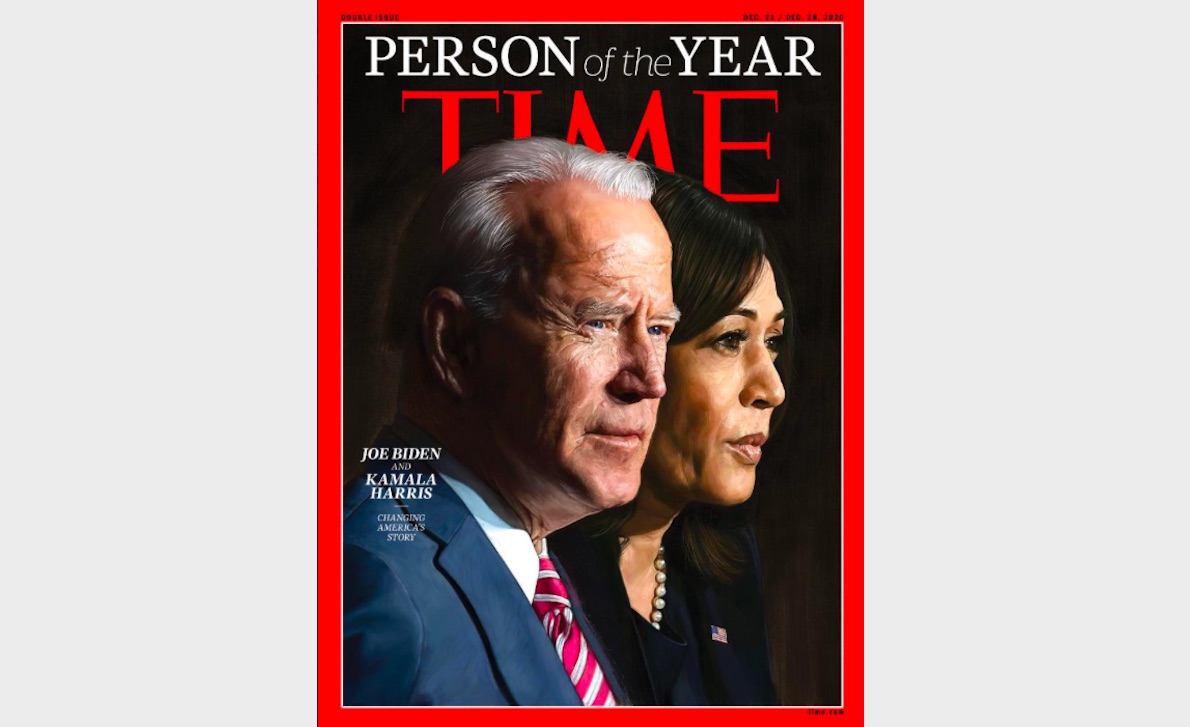 There was a time, not that long ago when TIME’s announcement of Person of the Year was a thing. A big thing. A thing that many in the media waited with bated breath to find out. Who would the well-heeled editors at the Time-Life building at 1251 Avenue of the Americas deem to be the person of the year?

But like so much else in our brave new, digital and post-modern world, it’s not really that big of a thing anymore. And last night’s announcement that President-elect Joe Biden and Vice President-elect Kamala Harris were joint persons of the year? It was such a complete and massive whiff that it undermines the once hallowed honor, maybe forever.

TIME Editor-in-Chief and CEO Edward Felsenthal wrote, “For changing the American story, for showing that the forces of empathy are greater than the furies of division, for sharing a vision of healing in a grieving world, Joe Biden and Kamala Harris are TIME’s 2020 Person of the Year.” He continued to explain:

“Joe Biden was elected President of the United States in the midst of an existential debate over what reality we inhabit. Perhaps the only thing Americans agree on right now is that the future of the country is at stake, even as they fiercely disagree about why…. The task before the new Administration is immense: a pandemic to confront, an economy to fix, a climate crisis to tackle, alliances to rebuild, deep skepticism to overcome with many Americans dubious about unity with Trump voters, and an opposition party still very much under Trump’s sway…. This will be the test of the next four years: Americans who haven’t been this divided in more than a century elected two leaders who have bet their success on finding common ground.”

It’s difficult to distill Felsenthal’s explanation more than Biden and Harris were elected amid a very divisive political landscape and a fervent hope that all of the problems that Biden administration will inherit, will be effectively managed by these two new players. There is no question that Biden and Harris had a phenomenal year, and are deserving of magazine covers. But making them Person of the Year overlooks a number of other much bigger stories and suggest our elected officials define us as a culture, more so than our actions.

This leads us to the obvious and most overlooked choice: The frontline health care workers fighting to save lives during a once-in-a-century global pandemic. Need evidence that these were the persons of the year? Search YouTube for videos of American citizens applauding health care workers at 7 p.m. every night from their front stoops, windows, and front yards. The earliest days of the coronavirus were as scary and surreal as can be imagined, and we as a people came together to share appreciation and love for those putting their lives on the line.

There are other better and obvious choices. This summer saw a nationwide reckoning on racial justice that, hopefully, transcended the national narrative of police accountability and the treatment of people of color.  The killing of George Floyd sparked nationwide protests and civil unrest and led to a meaningful discussion on police reform. George Floyd, Breonna Taylor, and the BLM protest movement would be a far better choice as Persons of the Year.

The other nominees that TIME put out in advance of their made for television special that aired on NBC Thursday night were Anthony Fauci and Donald Trump, both of whom dominated the news. Fauci has consistently provided a voice of caution and reason amid this pandemic, but it’s hard to reward the nation’s top immunologist with such an honor when nearly 300,000 citizens have succumbed.

And finally, Trump didn’t get the honor, and nor should he have. Yes, he generated more headlines than any other single person, but mostly for the most specious and decorum-flouting behavior. That’s not something to reward, especially to someone who takes this honor so seriously. Trump has notably complained in the past about not getting Person of the Year.

This leads me to what I think is the best explanation for TIME honoring Biden and Harris. It was a naked attempt to draw more attention to a magazine title that now a shell of its once august reputation and influence. Making his political rivals Persons of the Year is just a massive troll in hopes that Trump would take the bait and complain. Because all TIME has these days is the attention they can see from a viral Trump tweet.

And that’s the current state of traditional American media.